Toying with others in his picture world

Stop Josuke and his friends

Yoshihiro Kira is the secondary antagonist of JoJo's Bizarre Adventure: Diamond is Unbreakable.

Yoshihiro is voiced by Shigeru Chiba in Japanese and by Steve Kramer in the English dub.

When he once served Dio Brando, he met Enya Geil and got the Stand Arrow from her to awaken a Stand in his son, Yoshikage Kira. Sometime in 1983, he awoke Yoshikage's own Stand, Killer Queen. Later, he died of cancer and his wife followed afterward.

Using the Stand Atom Heart Father, he was able to linger on the mortal world via a photo.

Yoshihiro first appears whilst Josuke and his team are investigating the Kira estate for clues. He has a camera take of photo of the group, with himself on the photo somehow moving. He then controls a phone to berate Josuke for not answering, then cuts his lip. Yoshihiro then warns he'll kill anyone coming after his son. Josuke attempts to break the phone, but Yoshihiro makes the phone hit him in the temple. From his photo world, Yoshihiro takes a knife and prepares to stab Josuke and Jotaro. The Crazy Diamond user attempts to destroy the photo, but also injures Jotaro. And since the photo is well connected to the human world, Josuke quickly repairs the photo and the injuries.

After shattering the camera, Jotaro attaches Yoshihiro's photo to a wall with a tack. Inside his photo, Yoshihiro pretends to suffocate, but Okuyasu doens't buy it and stabs more tacks into the photo. Suddenly, this gives the evil elder a window to escape via a string. After taking the Bow and Arrow, he declares he will create an army of Stand Users to keep Josuke and his team away from Yoshikage.

Using the Bow and Arrow, he makes a number of Stand Users loyal to his cause to sidetrack Josuke's group. When much of these Stand Users fail or switch sides, Yoshihiro awakens his son's Another One Bites the Dust ability.

During the final desperate battle against Yoshikage Kira, Josuke snatches Kira's phone to learn Yoshihiro was on the other end. He fools Yoshikage's air bomb to go towards his father and detonates it, vaporizing Yoshihiro and sending him to his second death for good.

Using his Stand, Atom Heart Father, Yoshihiro Kira can connect to the mortal world through a photo. Anything he does in the photo will also happen in the genuine world. 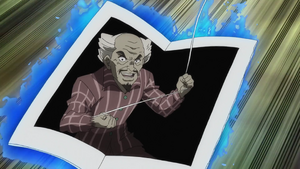 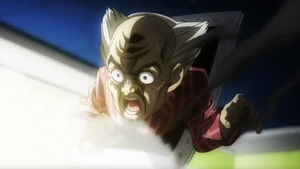 Yoshihiro shortly before his second and final demise.