Conquer Touto and Seito and unify Japan under Hokuto.

Obtain the power of Pandora's Box.

Yoshiko Tajimi is the Prime Minister of the Hokuto state of Japan and a major antagonist of Kamen Rider Build..

Though claiming to focus on agriculture and child care, in truth Tajimi primarily uses Hokuto's budget to fund military research. She seeks to conquer the other two nations within Japan to unify the country under her and in episode 16 makes her move when she launches an invasion of Touto.

She was portrayed by Ryoko Gi.

Tajimi is first seen meeting with the other Prime Ministers via hologram to each deliver their monthly report. At the meeting Tajimi claimed that Hokuto's latest child care and agricultural programs had been a success. When Taizan Himuro, Prime Minister of Touto, suggested they make unified movements both she and the Prime Minister of Seito, Masakuni Mido, declined.

At a later meeting with Prime Minister Himuro, Tajimi criticizes him for failing to deal with Build and Ryuga and accuses him of allowing them to go into Hokuto on purpose to cause a widespread panic. In response Gentoku Himuro, the Prime Minister's son, ridicules her hostility towards Touto and terminates her transmission.

After the current acting-Prime Minister Gentoku Himuro tells both her and Mido to drop the facade of politeness and wage an all-out war for control of the Pandora Box, Tajimi and Hokuto declare war on Touto. Employing the now renegade Faust organization, Tajimi has then develop a Kamen Rider for Hokuto, Kamen Rider Grease, whom she assigns to spearhead Hokuto's invasion of Touto.

When the Representative Match between Grease and Touto's Kamen Rider Build ends in Touto's favor, Tajimi orders an invasion of Touto, planning a quick, decisive victory over Touto due to her own nation's failing economy. However, due to her sending most of her forces to invade Touto, Hokuto was left with little forces to defend its borders, prompting Seito to take the opportunity to invade and conquer Hokuto. Seito's invasion of Hokuto proved a swift success, with Tajimi being captured and taken into custody by Seito's forces.

Tajimi was later set free and given the Owl Lost Bottle by Nariaki Utsumi to stop Kazumi from escaping Faust's clutches. Transforming into Grease, Kazumi engaged his old Prime Minister, though was reluctant to defeat her as doing so would also kill her. However, Build soon showed up and, transforming into his Genius Form, deduced that the Genius Bottle had the potential to purify Smash. Defeating Tajimi, Build's theory was proven correct when Tajimi reverted to her normal form. Now no longer susceptible to being influenced by Nebula Gas, Tajimi pleaded with Build and Grease for forgiveness for her past actions. Kamen Rider Evol then showed up to reclaim the Owl Lost Bottle, prompting Build to tell Grease to transport Tajimi to somewhere safe while he engaged Evol.

In the new world creating by the merging of the World of Build into the main Kamen Rider world, Tajimi was mentioned in a news broadcast as being appointed by Prime Minister of Japan Taizan Himuro to be his Minister of the Economy. 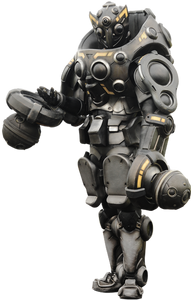 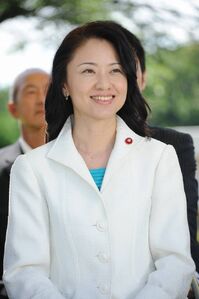 Tajimi before being hit with the energies of Pandora's Box. 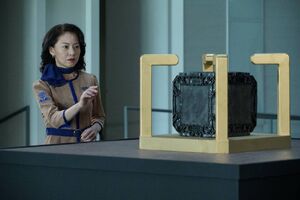 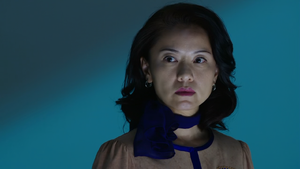 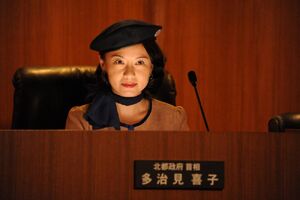 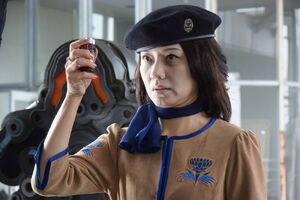 Tajimi right before transforming into the Owl Lost Smash.