Yoshitsugu Otani is a villain from Sengoku BASARA 3.

He is on the western army of Japan. He plans to make everyone in the world suffer, once the Western army wins at Sekigahara. Yoshitsugu is also a friend of Mitsunari Ishida and longs to keep him alive. Before Sekigahara, he forged a secret pact with the Mori clan to get them to his side. As he is plagued with unknown illness, he was masked in bandages and bound to a palenquin because his legs don't work anymore.

He appears in Sengoku BASARA 4 as a playable character.

Appearance wise, Yoshitsugu is completely wrapped in bandages to portray a trait in which he is historically famous for, his leprosy. His design also reflects his dark personality, wanting the world to share the same pain he has suffered. His helmet also sports design elements of the Ōtani crest, with butterfly-esque traits and his armor has a skeletal appearance to it, giving him a even more sinister appeal.

He also rides a floating palanquin, again, to covey across his illness and his historical counter part. His palanquin isn't the only thing that mysteriously floats, as he uses several magical orbs to attack his foes. The orbs can grow in size, as seen in his Basara, and have a wide attack radius.

Yoshitsugu is depicted as one of the more tragic characters of the series, and his misguided ambitions come across as "evil". Because of his disease, he was constantly ridiculed and shunned. Seeing the great battle of Sekigahara as a way to take his revenge and share his misfortune with the world, he takes up his weapon and joins up with Mitsunari, leader of the Western army, for the approaching campaigns for the land.

Yoshitsugu's main focus on his attacks are curse marks. In almost all of his attacks, by holding its attack button, Yoshitsugu can generate a "curse field" for a few seconds. Enemies caught in it will have a curse mark, which will disappear after some time. His special skills will then have additional effects on enemies with curse marks.

Also, because Yoshitsugu control the orb magically, he can attack enemies while moving around normally. 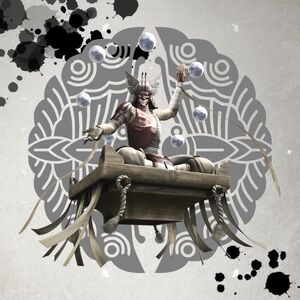 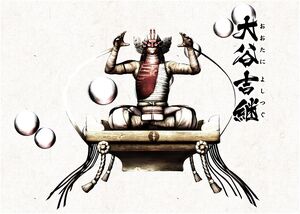 Add a photo to this gallery
Retrieved from "https://villains.fandom.com/wiki/Yoshitsugu_Otani?oldid=3567841"
Community content is available under CC-BY-SA unless otherwise noted.