Youkai
The Youkai are the main antagonists of Choujin Bibyun. They are a race of mythological creatures who surface after the Akuma Clan's invasion to menace humans.

The Youkai emerged after the defeat of the Akuma Clan. The first Youkai to strike was Backbeard, who used his many eyes to spread chaos all throughout the city. He eventually came upon Daizaburo Daima, director of the Choujin Research Center, who announced his intention to oppose the Youkai. Backbeard sent a squad of Yoki to attack the scientist, but he was able to escape with help from policewoman and ninth level ninja Lisa Akechi. The Youki pursued Daima and Lisa, but athlete Kei Tsukimura saw them fleeing and helped fight off the attacking Youki. After Daima discovered Kei was one of three people destined to receive the Army Destroying Star containing one of the three Akumaizer 3, Backbeard, having spied on their conversation, placed a curse on Kei and attempted to kill him before he could become one of the Choujins. Kei later met up with Daima, who performed a ritual on him to imbue him with the soul of Xavitan, enabling him to become Choujin Bibyun. Backbeard then attempted to attack Bibyun, but Bibyun stabbed his eye, forcing him to reveal his true form. Backbeard then kidnapped Daima's grandson but Bibyun met up with the other two Choujins, Bashaan and Zusheen, and together they were able to rescue the grandson and defeat Backbeard.

The next Youkai to strike was Suiko, who cursed the water of a nearby village so that anyone who drank it would be brainwashed into being his slaves. When a group of children went swimming in it, Suiko abducted all of them and turned them into his slaves as well. The only child in the group to escape was Midori, who had chosen not to go swimming. Midori later met Lisa Akechi and showed her the marsh where her friends had vanished from. Lisa at first did not believe Midori until Suiko appeared and sent his human slaves after them. Believing that mere humans wouldn't be enough to catch them however, Suiko summoned some Yoki and sent them out to capture the two as well. Lisa and Midori initially were able to evade Suiko's forces until Suiko brought out Midori's friends, who he had since turned into his slaves, and ordered them to call out to her. Believing they were alright, Midori went to meet up with them, only to be captured by Suiko. Lisa then attempted to rescue her, but Suiko summoned more Yoki to attack her. It was at that moment that the three Choujins swooped in and saved Midori before beating up Suiko. Suiko attempted to escape by diving into the water, but Bibyun raised the temperature of the water and forced Suiko out. Bibyun and Zusheen then chopped off Suiko's head and kicked it away, leaving Suiko headless but still alive, at which point Bashaan used his special power to freeze Suiko. Bibyun then summoned a red cross and sent Suiko away on it to the Himalayas. 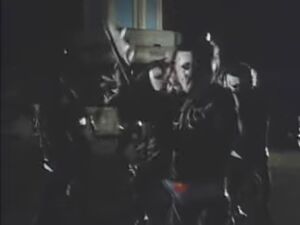 The Yoki soldiers of the Youkai.