Understanding and replicating human speech
Incredible amounts of speed, stamina and strength
Being able to split in two and rejoin as a single body again
Shape-shifting
Possession
Granting others the ability to understand different languages

Attacking humanity at the most inopportune moments

Wreak havoc in lands where are without rulers or lands ruled by tyrants.

Serve the strongest Kirin. (some)

Youma (妖魔) are evil creatures analogous to yōkai in The Twelve Kingdoms. Little is known about them, other than they are generally ill omens and possess supernatural powers.

Of the few things that are known about youma is that they infest lands without a ruler or lands ruled by an incompetent or oppressive king or queen. They are feared by the people due to their tendency to strike at the most inopportune moments and the lethality of their attacks. Kingdoms that are well managed and possess a happy populace usually have a minimal number of feral youma.

No tree has ever been known to bear youma, which is strange considering that, in that world, all living creatures (including other plants) are born from eggs, called ranka, that grow on sacred trees.

With the exception of nyokai, all youma are male. All are reasonably intelligent, yet incredibly aggressive as well. Some have the capacity to understand human speech.

Their appearance varies, as there are several types of youma in existence with differing abilities. Most look rather chimeric, often exhibiting traits of different animals together. Several known youma resemble birds or canids.

They possess an impressive and powerful range of magical abilities, including:

A subset of youma created specifically to look after kirin, the holy creatures who choose the rulers of the Twelve Kingdoms, nyokai are exclusively female and are generally regarded as being in service to the gods. They are innately born with the knowledge needed to care for and protect kirin and are the only known youma to be born from trees, growing from the roots of a tree known as the Shashinboku.

Each nyokai has a chimeric appearance, with most adopting most of their looks from birds and humans—those who display many traits from different creatures are considered auspicious and "well mixed." They are all capable of understanding and speaking human languages, and all are given the surname Haku along with their first names.

Nyokai are devoted guardians, jealously safeguarding the kirin throughout their entire lives until their deaths; upon the death of a kirin, their nyokai pass on as well.

The only beings capable of taming youma are the kirin; they bind the youma to them to act as their servants, with bound youma known as shirei. In exchange for their services and loyalty, shirei are granted permission to eat the kirin's corpse upon its death. Their powers are linked to their kirin; should they fall ill or have their power sealed, the same fate would befall them as well. Shirei are necessary to kirin, since they abhor violence and need the protection of other beings as well as their power in order to fight through them.

Since kirin are subservient to their rulers, shirei can also be commanded by kings and queens, with the exception being that their orders endanger their kirin.

In order to tame a youma to make it become a shirei, kirin engage them in a battle of wills: they never sever eye contact (even if this requires having to glare at the youma for hours or days) and chant a special incantation that, if successful, would reveal the youma's name to the kirin and bind it to him/her. The success of the process depends almost entirely on the kirin's strength and willpower; youma are only willing to submit to strong masters, as it would mean that that same power would be passed on to them upon consuming the kirin's body. Uninterested youma usually run away or try to attack the kirin.

Yokuhi, nyokai in service to the kirin of the kingdom of En 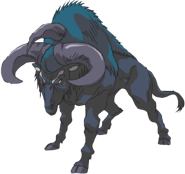 An unknown type of youma

A form shown by a shapeshifting toutetsu shirei named Gohran. The most powerful of all youma

Sanshi, nyokai in service to the kirin of the kingdom of Tai
Add a photo to this gallery

Retrieved from "https://villains.fandom.com/wiki/Youma_(The_Twelve_Kingdoms)?oldid=3179869"
Community content is available under CC-BY-SA unless otherwise noted.