The Unknown
The Mysterious Figure

Member of the real Organization XIII

Ensure the success of Master Xehanort's plan through the creation of the "real Organization XIII".

Young Xehanort (also known as the Unknown and the Mysterious Figure) is a mysterious character, the identity of whom is actually Master Xehanort (albeit at a younger age). He first appeared in the North American, PAL, and Final Mix versions of Kingdom Hearts Birth By Sleep, in which he is fought as a super-boss and is the main antagonist in Kingdom Hearts 3D: Dream Drop Distance and one of the secondary antagonists in Kingdom Hearts III.

He is the original Xehanort and was given the power to travel through and manipulate time itself, to help Master Xehanort accomplish his goal of containing his essence in thirteen different vessels.

He is voiced by Takanori Okuda in Japanese and by David Gallagher (who also voiced Riku and his replica) in Birth By Sleep and Ben Diskin in Dream Drop Distance and Kingdom Hearts III, (who also voiced Sig from Puyo Puyo, Nooroo) in English.

Before Birth by Sleep

Xehanort lived on the Destiny Islands until his future Heartless, Ansem, time traveled back in time to meet him. Ansem gave him the power to control time and sent him to gather all of his incarnations.

At an unknown point before Dream Drop Distance, Young Xehanort travels to the Land of Departure after his future self had destroyed it and confronts Terra, Ventus, and Aqua separately. After an arduous battle, he disappears without a trace.

Young Xehanort travels to Radiant Garden, where he converses with a newly revived Braig about Master Xehanort's plans. During the conversation, Young Xehanort recalls the legends of Keyblade inheritance and notes the importance of his future self's Keyblade. Braig, knowing that the weapon is tied to the Keyblade War, decides to proceed with his own plans.

Young Xehanort travels to the present and has several interactions with Sora and Riku. His purpose during this time is to monitor Sora and ensure he follows a path where he can be controlled. After Sora's battle with Xemnas, Young Xehanort appears and explains that Sora's heart has already begun to sink into the darkness and his own origins, ending with stating that since Sora's first encounter with Ansem during the original Kingdom Hearts everything that had happened was unavoidable.

Young Xehanort later appears before Riku when the latter attempts to retrieve Sora. Mickey then appears and uses a Stopza spell to freeze him, however he gets possessed by his elderly self and fights Riku. After their battle Master Xehanort appears and explains the machinations of his plans. After failing to possess Sora, the real Organization XIII's members, including Young Xehanort, return to their original timelines.

Young Xehanort returns in Kingdom Hearts III. He first appears in the Toy Box world where he spilts the world into two with Andy and some of the toys (Jessie, Bullseye, Slinky and the Potato Heads) in the real one and Woody, Buzz, Hamm, Rex, the green aliens and the green soldiers in the version that the heroes visit. He does this to learn about the relationship between hearts and bonds. The heroes with the toys track him down at Galaxy Toys where he admits the fraudulent nature of this world to the heroes before leaving them with some Heartless possessed toys within the store for the heroes to battle. He later appears when the heroes go to find Rex in the video game department where he sends Sora into the world of the video game Verum Rex (of which the toys believe he, Donald and Goofy are figures from) while taking a possessed Buzz into a Dark Corridor after a failed attempt at him shooting Woody. Sora finds a way out of that world and on a suggestion from Sarge, goes to the Kid Korral to find the Dark Corridor. Upon arrival, the heroes confront Young Xehanort with Woody telling Young Xehanort that he knows nothing about friendship and ponders that no one has ever loved him before. The group then dispel the darkness of isolation that surrounds Buzz through light of friendship, in which Young Xehanort learns that empty vessels can truly grow hearts. Upon seeing Buzz being freed and left to contemplate what has happened and he's been told, he leaves the heroes with a parting gift in the form of a big King of Toys Heartless for the heroes to battle, but not before whispering to Sora to find the hearts connected to him.

Young Xehanort later appears at the Keyblade Graveyard to confront the Guardians of Light. After Sora uses the power of waking to save his friends from the Lich, Young Xehanort warns him that misusing the power will doom him. During the clashes between darkness and light, Young Xehanort joins his future Heartless and Nobody in fighting Sora, Riku, and Mickey. Though he is defeated, Young Xehanort spitefully declares that Sora is doomed before returning to his timeline. However, while he lost his memories of his experiences in the future, they engraved themselves upon his heart. His last words to Sora ultimately ring true, as Sora eventually fades away as a consequence of using the power of waking to save the slain Kairi whom was killed none other than his elderly self.

As a high-ranking villain, Young Xehanort is fought as a boss character in both his appearances to date. He is an optional "super-boss" in Birth By Sleep and the penultimate boss in Dream Drop Distance. His battles are notorious for being very difficult and confusing.

In Birth by Sleep, Young Xehanort (known as the Mysterious Figure in that game) is notorious as by far the hardest boss in the series. Here, he is fast, unpredictable, and utterly relentless in his attack patterns. Worst of all, all of his attacks can instantly kill the player in just one hit. Equipping Once More and Second Chance can prevent this, but their impact is minimal; a single hit will still knock the player to 1 HP, and even then, he never stops attacking. Even if the player manages to come up with a strategy, winning this fight requires incredible luck, skills, or both. Young Xehanort is, in fact, so hard that he was slightly nerfed in later versions of the game.

In Kingdom Hearts III , Young Xehanort confronts Sora, Riku and Mickey one last time in the Keyblade Graveyard along with Xemnas and Ansem being the last Organization members Sora takes on before settling the score with his elderly self.

Young Xehanort as a resident of Destiny Islands. 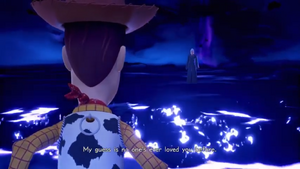 Woody's light overpowers Young Xehanort by telling him that no one has ever loved him before. 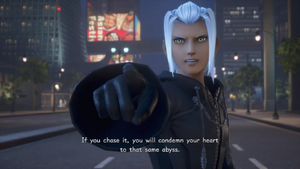 Young Xehanort warning Sora of the consequences of misusing the power of waking. 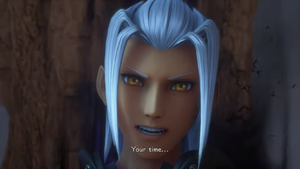 Young Xehanort mocks Sora for his fate before dying.

Young Xehanort as he appears in Kingdom Hearts Dark Road.