To dominate the Human Sphere.

Imperialists
The Yu Jing are an Asian spacefaring civilization in the late 22nd century setting of the Infinity tabletop wargame by Corvus Belli.

Yu Jing is the second most powerful regime in the Human Sphere out in the cosmos as of the late 22nd century. Like it's rivals it is a flawed spacefaring power with a dark side, just like it's rivals. It aims to become the dominant power by manipulating, seducing, fighting, and bribing the opposition. The regime uses the latest technologies and its forces are among the most advanced in the Human Sphere.

The Popular People's Republic of China faced a crisis brought about by the success of it's socialist capitalism, in which Western cultural influence was spreading among the Chinese people. To the party the materialism and ideals of the West was corrupting their society and posing an existential threat to their rule.

The state took action to preserve its power and protect their civilization from the West. For starters they restored the traditional values of China but filtered it through the doctrine of the party. The religions of ancient China were re-established by law, under the supervision of the state. Located descendants of both the Ming and Qing dynasties were located, and the position of the Emperor was restored. He was to be the symbol of both China and of a new nation, which was named "Yu Jing" (translation: Jade Capital).

A major part of the reason for bringing about the restoration of the imperial throne and changing the name of China to "Yu Jing" was because of what had happened recently in the Far East. The economic expansion of China led to its economic domination of most of its the neighboring states in the eastern part of Asia, which were Mongolia, North Korea, Cambodia, Vietnam, Burma, Laos, Bhutan, Taiwan, Nepal, and Thailand. Every single one of them were soon annexed into the Chinese polity, becoming prefectures that were permitted to keep their cultural traits.

The progressive fall of the United States in the 21st century had crippled those nations whose economic fortunes were tied to America. Japan and South Korea were among the victims, and they agreed to the annexation of their nations to China. Though the Japanese decided to be annexed, the population of Japan generally resents the fact that they had to be annexed resulting in that populace being among the least loyal and reliable.

Due to the cost of space exploration, the Yu Jing did not follow their rival PanOceania into exploring deep space, resulting that their rivals beat all the Terran regimes in the race to find new habitabe worlds. Yu Jing, quickly attempted to catch up in the needed technologies and resources for deep space exploration.

Yu Jing discovered a star system with two suitable planets, practically twin worlds. The capital was moved from Earth to one of the worlds, which was named "Yutang". On that world is the capital city of Yu Jing, the Forbidden City of Tian Di Jing. As of the late 22nd century, Yu Jing has three territories; the capital world of Yutang, it's neighbor planet of Shentang, and the Asian territories (Chung Kao) on Earth.

They Have also established colonies on the planets Svalarheima and Paradiso, which they fought battles and eventually a war against PanOceania for control of those worlds that ended inconclusively and both were forced to share the planets. When it came to settling their worlds, the planet Yutang was reserved for settlers from China. In turn the planet Shentang was reserved for settlers from the nations annexed by China, whom settled in regions according to their origin and culture.

In the dominion of Yu Jing, power is divided between two or more factions creating competition. This applies to power in the political, economic, social, & religious spheres, with one or more rivals competing with each other. Sovereign power is split between the Party which rules Yu Jing and the Emperor who though beholden to the party has complete autonomy when it comes to judicial power and the judicial system.

The imperial system likewise functions in a similar manner with the two dynasties (Ming & Qing), as the throne rotates between them. Whichever is not on the throne, attempts to undermine and sabotage their rival dynasty. The dynasties are continuously scheming against each other and both having public and secret organizations that provide support and funding. The imperial system is rotated between the two dynasties.

When it comes to the Party, it's organization is like that of a Masonic lodge, sinister and mysterious. To join the party you must undergo a strict evaluation done by an internal committee. It recruits only the best among the citizens of Yu Jing. Internal politics within the party are tough, with the hard core leftist "Old Guard" in opposition to the younger, reformist "New Wave".

There are three main faiths in the nation of Yu Jing. Popular among the common folk is Daoism. The official state religion is Confucianism. Among the party, the intellectuals, and the cultural elite it's Buddhism which is popular. When it comes to politics, the citizens participate in elections and referendums, voting for either the Old Guard or the New Wave. No dissent is permitted in Yu Jing and the Ministry of Information bombards them with propaganda. Though the citizenry on average don't have a standard of living as high as those of PanOceania, they feel fewer social differences.

Operatives of Yanjing (The Eyes), the Military Intelligence Service of Yu Jing and various Triad-affiliated criminal groups have established a web of influence throughout the Human Sphere. It has been done via a complex network of spies and organized crime figures whom have infiltrated all major parts of society in the Human Sphere.

The armed forces of Yu Jing have access to the same type of weaponry and equipment that it's spacefaring human rivals possess. Humans lack directed energy weapons, relying still on projectile weaponry. Interstellar travel is by use of wormholes. 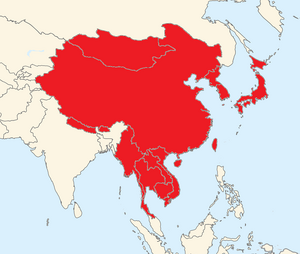 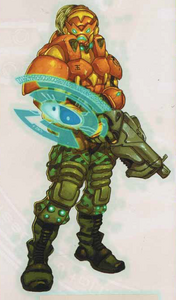 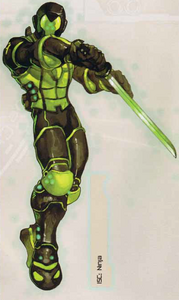 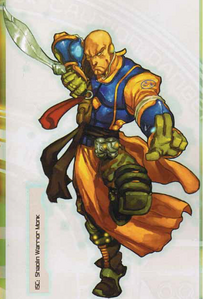 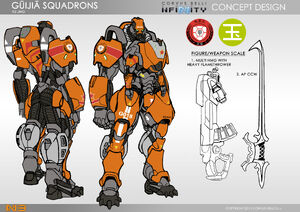 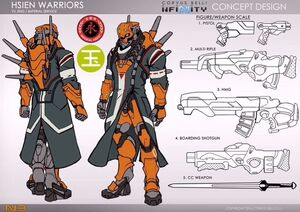 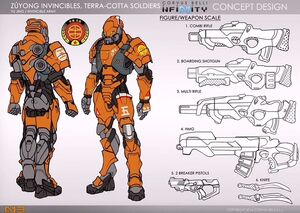 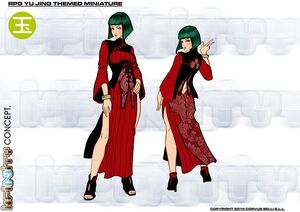 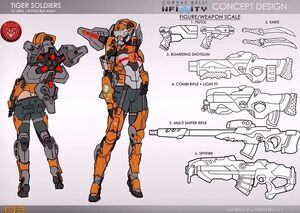 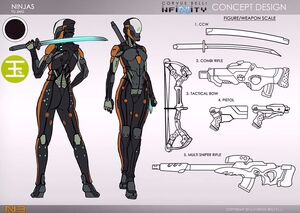 Female Ninja (Infinity)
Add a photo to this gallery
Retrieved from "https://villains.fandom.com/wiki/Yu_Jing?oldid=2675398"
Community content is available under CC-BY-SA unless otherwise noted.