Founder of the Yevon religion
Leader of ancient Zanarkand

Yu Yevon is the overarching antagonist of Final Fantasy X. He is the creator of Sin and the so-named founder of Yevon, the cult controlling Spira (in truth, the cult is only named after him when, in fact, it was created after the misguided destruction of his body), which teaches summoners to go on a pilgrimage to destroy Sin while sacrificing themselves, only for Sin to return later on.

Every time this happens, the person used to create the "Final Aeon" that defeats Sin becomes the host for the new incarnation of Sin, while Yu Yevon remains the true controlling force inside Sin.

He was also the father of Lady Yunalesca. Yu Yevon was the leader of Zanarkand a thousand years ago, but during a battle with Zanarkand and Bevelle, he knew Zanarkand would fall. So he turned the citizens of Zanarkand into fayth and created a Dream Zanarkand under the sea. Yu Yevon then created a powerful armor out of many pyreflies and thus created Sin, which was initially intended to protect him while he planned to continue summoning Dream Zanarkand. Unfortunately, he unintentionally lost control of Sin, and it destroyed both Bevelle and Zanarkand and plagued Spira in a spiral of death ever since.

Yu Yevon's existence is not revealed until late in the story, and he does not appear until the very end, after the heroes defeat Jecht, the current host of Sin in the form of Lord Braska's Final Aeon. Yu Yevon then reveals himself as a dark, glowing creature with the symbol of the Yevon cult on it, and with all his defenses in the form of Sin bypassed, he is very weak.

His only attack is the Gravity spell, which automatically takes away half of the target's remaining HP and thus can't actually kill the characters, and he is killed by Tidus, Yuna, and the others, destroying Sin once and for all. With Yu Yevon gone, Dream Zanarkand fades away, as does Tidus. All fayth are then able to find eternal rest, until Vegnagun attacks the farplane in the second game. 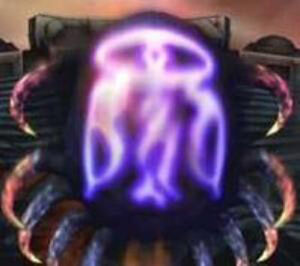 On the hindquarters of Yu Yevon's is a symbol of his fanatical cult known Yevon. 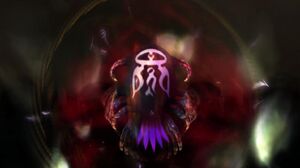 Yu Yevon, the founder of the Yevon cult.
Add a photo to this gallery

Retrieved from "https://villains.fandom.com/wiki/Yu_Yevon?oldid=4140988"
Community content is available under CC-BY-SA unless otherwise noted.