Military Warlords
Yuan Shao's Army (in Chinese: 袁紹軍) are the antagonistic faction in the 14th-century Chinese classic novel Romance of the Three Kingdoms by the late Luo Guanzhong, and its multiple adaptations. They are the name given to the massive military force that Yuan Shao assembled during the Later Han Dynasty of China.

Yuan Shao was born in the aristocratic heritage of the Han Dynasty and played a key role in the last few years of the Han. He and He Jin planned ten eunuchs, and once they killed He Jin, they planned their death. Yuan Shao also answered the call of his childhood friend Cao Cao to the alliance and accepted the role of the leader of the anti-Dong Zhuo alliance to recover the building.

After the end of the alliance, Yuan Shao played his dominant position on the land north of Cao Cao. As the regional battle broke out, he turned to the land of Han Fu, Gongsun Zan and Zhang Yan. After absorbing, destroying or forcing each opponent's warlords to yield, he ruled the largest piece of land on the land. Next, he clashed with Cao Cao's army in the central plains of Guandu and his home in Hebei.

After Yuan Shao's death, there was much debate about the division between his successor and his troops between the oldest and youngest sons. Yuan Shao personally hopes that his youngest Yuan Shang will succeed, but Yuan Tan opposes it as the eldest son. As a result, the links between families were torn apart, weakening their power and providing Cao Cao with ample opportunity to overcome them. 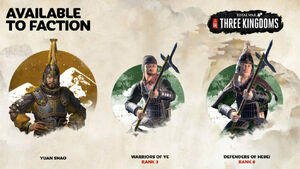 Retrieved from "https://villains.fandom.com/wiki/Yuan_Shao%27s_Army?oldid=3544665"
Community content is available under CC-BY-SA unless otherwise noted.