43rd Head of the Tao Family

Using his sword and leading.

Groom Ren Tao to Become the Next Shaman King

Oppressing his own children, teaching them to never trust others outside of the family

Yuan Tao is the ruthless 43rd head of the Tao Family of Shaman. He is the wife of Ran Tao, the father of Ren Tao and Jun and serves as the main villain of the first third of the anime and manga series Shaman King.

When he was first seen, Yuan Tao was an overwhelmingly tall and muscular man with a small face, a long mustache, and tattoos all over his body. When fighting, his shirt would rip off, exposing his bare chest. However, later on his true form was revealed, he was much shorter and more slim, but still tall and muscular, adorned in a purple and yellow coat covering a black robe with a red and yellow sash across the middle. He has black hair and black eyes.

When he was first revealed, Yuan Tao was portrayed as a sadistic malevolent leader and father who wants his family to rule the world by one of them becoming Shaman King and believes that friends will do nothing more than get in his way.  However, later on it was revealed that he was broken and disillusioned about humanity due to how their ancestors were betrayed  and ostracized by the ones that the used their powers to help, which caused him to hate humanity, and believe that if his children were to make friends then they would only be betrayed eventually.

He is a very talented Taoist and has an extremely high Furyoku level, as he is able to maintain a gigantic Over Soul made of all of his ancestors, for several years.

His spirits are that of 2000 years of the Tao Family who have been unable to leave to the afterlife because of their treatment of those they saw nearest. He carries these spirits on him, by wearing an armor made out of memory tablets. He can use these tablets to generate an over soul shaped like a large sized version of himself, only far more exaggerated.

He can also gather the souls in the Bâo-Lèi Sword and create a huge, scaled, Shén lóng like Chinese dragon complete with Tao Yúan's head (with his exaggerated mustache & beard) and four sets of claws. 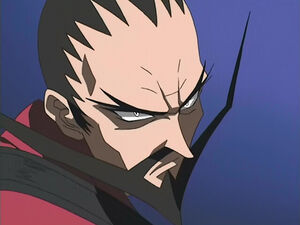 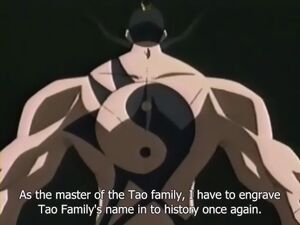 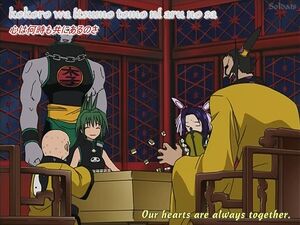 Retrieved from "https://villains.fandom.com/wiki/Yuan_Tao?oldid=3538866"
Community content is available under CC-BY-SA unless otherwise noted.