Gaining and counting her money.
Running and controlling the Bathhouse.
Smoking.
Harassing and torturing her workers.

Continue to rule over the Bathhouse.

Become even more rich and powerful and prevent the human world from ever interfering.
Make Chihiro forget her own name, keep her from escaping the Bathhouse with her parents and work her to death (all failed).
Get her son back from Chihiro (succeeded).

Yubaba is the main antagonist of Hayao Miyazaki's 12th animated feature film Spirited Away. The character makes her first appearance when she is met by Chihiro Ogino.

She is a greedy witch, the proprietor of the Bathhouse, the identical twin sister of Zeniba and the mother of Boh. She has a bird servant affectionately referred to by fans as Yu-Bird, an apprentice by the nickname of Haku, Spirit-like pets named Kashira and is the employer of countless other bathhouse workers.

Yubaba is an elderly witch with an inhumanly large head and nose, who supervises the bathhouse. Yubaba has an overbearing, ostentatious and authoritarian personality, but does show a soft side toward her giant baby, Boh (whom she spoils beyond belief). Yubaba lives in opulent quarters and is only interested in taking care of guests for money. Despite being rather despicable and repugnant, Yubaba is not completely without human traits, and seems to warm up to Chihiro somewhat by the end of the movie.

Yubaba has a twin sister named Zeniba. Although identical in appearance, their personalities are almost polar opposites, Yubaba being merciless and greedy while Zeniba is generous and kind, though Zeniba is very vengeful when someone tries to steal her magic seal.

Not introduced until after being mentioned by both Haku and Kamajii, Yubaba quickly establishes herself as a very terrifying authoritarian figure to Chihiro during their first face-to-face meeting (Yubaba is first heard in this scene talking through the gargoyle knocker on the door to her office). During her interview with Chihiro, she uses various methods to intimidate Chihiro into speaking about those who have helped her, and is quite annoyed that the latter repeatedly asks for a job, forcing Yubaba to make good on an oath to give anyone a job who asks for one. Calling Chihiro stupid, useless and spoiled, Yubaba's tirade ends abruptly with one of Boh's tantrums, during which she reluctantly gives a contract to Chihiro. Remarking on how beautiful (and long) Chihiro's name is, Yubaba quickly removes several characters from the signature, renaming Chihiro "Sen". She is then seen ordering a very stoic and distant Haku to take Chihiro to the lower floors.

Yubaba is next seen in the movie as a bird. By wrapping herself up in a cloak, she transforms her body into one similar to a bird's and flies off into the distance, allowing Haku to visit Chihiro without interference.

She returns to realize that a "stink spirit" is trying to walk into the bathhouse during the rain and orders her workers to chase the spirit away. Realizing later that the guest is in fact not a stink spirit, she orders Chihiro to serve him. After Chihiro successfully removed large amounts of junk and debris from the spirit, Yubaba hugged her in happiness, revealing that the dirty spirit was actually a River Spirit, and a very wealthy and powerful figure in the Spirit Realm. Some time later, she orders Haku to steal a golden seal from Zeniba.

With No-Face causing an uproar in the bathhouse, Yubaba angrily blames Chihiro on the phone for letting No-Face in, and promptly tells her subordinates to dispose of Haku, who was gravely injured after being cursed by Zeniba and of no use to her anymore. She is then seen coming out of a rampaging No-Face's guest room and quickly dismisses her (then transformed) son, Boh, for being a "dirty mouse" and pushes Chihiro in the room to face No-Face alone.

As No-Face regurgitates all the food and other matter he has eaten whilst chasing Chihiro, Yubaba remarks that what No-Face has done is unforgivable and tosses a fireball at him only to be puked on by the monstrous spirit.

She is next seen in her office having washed herself. Realizing that "Boh" was really just the Three Heads and that the "gold" she received from No-Face was merely mud, she storms into Boh's room looking for her son and asks Haku, with blazing anger, where her son is. When told he was at Zeniba's place, Yubaba immediately extinguishes the flames in her mouth and seats herself in a chair, striking a deal with Haku to have him return Boh in exchange for Chihiro's freedom.

She is then seen pacing on the bridge entrance to The Bathhouse with a contract in her hand, waiting for Chihiro and Haku's return with her son. Having completed her deal with Haku and with the contract destroyed, Yubaba spitefully tells Chihiro to leave. Unlike her workers and son, Yubaba does not bid a friendly farewell to Chihiro, but nonetheless remains to see her off. And as Chihiro and Haku leave, Yubaba is briefly seen to turn and give an impressed smile.

Yubaba is Zeniba's twin sister and, as such, is almost completely identical to her. She has an inhumanly large figure and a large mound of discolored hair combed into a bun-like style. Her age is never stated, but Yubaba is very wrinkly. She has dark brown eyes accentuated with lavender eye shadow as well as a prominent crooked nose drawing attention to a bindi-like mole between her eyebrows. She also wears golden earrings identical to those of her twin sister's. Unlike her sister, Yubaba is not shown with glasses in the film.

As the main antagonist of the film, Yubaba is extremely overbearing, intimidating and authoritatian. Like many other workers of her infamous bathhouse, Yubaba obsesses greedily over gold and is shown to be willing to view gold as a priority over her own family (especially Zeniba, whom she expresses hatred for). However, she has in some instances shown a greatly quantitative amount of motherly care for her son Boh, and is seen completely devastated when the latter states that he "won't like [her] anymore" if she continues to treat Chihiro (Sen) unfairly towards the end of the film.

She is quite selfish and frugal (when it comes to workers), having given herself an opulent office with immeasurable amounts of unoccupied space and her many workers a single cramped room as living space. From the other side, however, she also readily takes both disgusting and dangerous tasks herself (like meeting the stinking Unnamed River Spirit or attempting to shield her workers from the rampaging No-Face). She also appears to be highly professional in these tasks.

Her magical capabilities have allowed her to "steal" the names of her workers, binding them in a contract to her bathhouse forever unless they manage to miraculously recall their full names (the only two people seen doing so are Haku and Chihiro, both of which relied on each other to remember). She is also seen to be able to spit fire when angered to a certain extent (seen when Haku mentions that her precious son Boh has been "taken" from her).

While her attributes are seen as incredibly antagonistic in the film, Yubaba has occasionally shown several redeeming qualities, such as her willingness to praise Chihiro after her excellent work with helping the Unnamed River Spirit and motherly softness for her son Boh. In the end she simply places gold over most things, causing others to disagree with her due to their varying mindsets.

Yubaba is a powerful and feared witch who displays a vast array of magical powers, including: 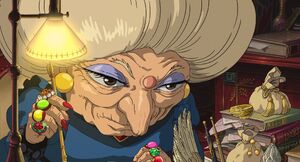 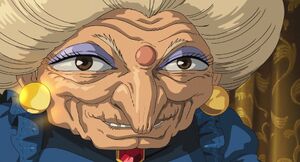 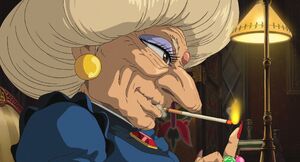 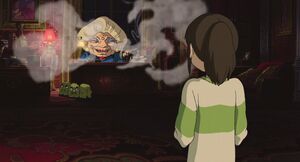 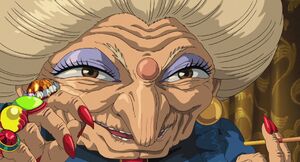 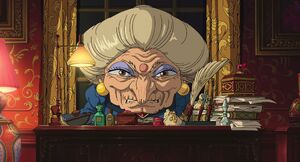 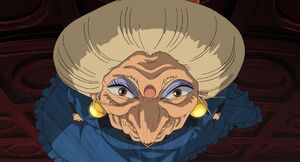 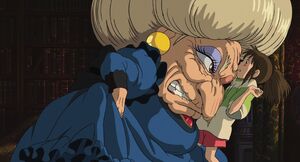 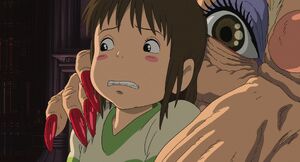 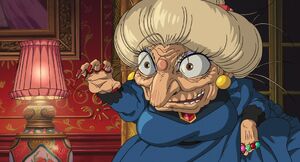 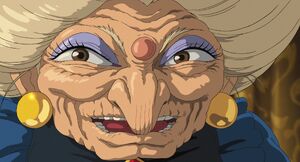 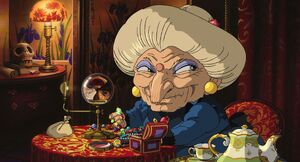 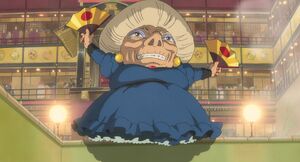 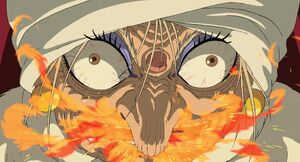 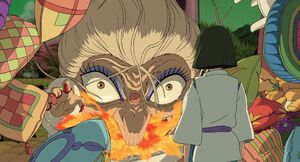 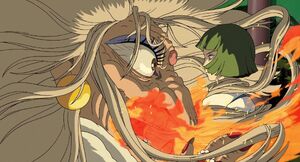 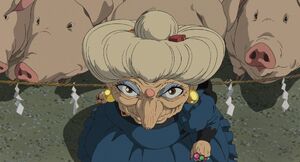 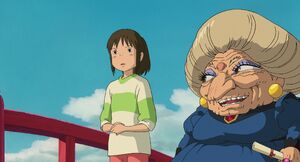 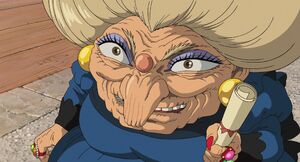 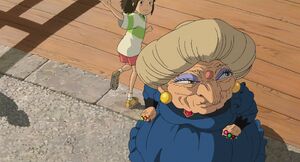 Yubaba's defeat
Add a photo to this gallery

Retrieved from "https://villains.fandom.com/wiki/Yubaba?oldid=3799922"
Community content is available under CC-BY-SA unless otherwise noted.