Hanging out with Yuka and Kaido.

Obtain peace between humans and Orphnochs.

Awaken the Orphnoch King to get revenge on humanity (formerly).

Yuji Kiba is the deuteragonist of Kamen Rider Faiz, being the title character's enemy and friend. Despite initially seeking to forge a peaceful coexistence between humans and Orphnochs, late in the series Kiba abandons his ideals and temporarily sides with Smart Brain to awaken the Arch Orphnoch and get revenge on humanity, becoming one of the main antagonists of the final arc. He also appears in the Paradise Lost movie as one of the two main antagonists alongside Leo.

He was portrayed by the late Masayuki Izumi.

Originally human, Kiba became a natural Orphnoch after dying within two years when he was in a coma as a result of horrific car crash which killed his parents. Once revived, overwhelmed by his heightened senses, Kiba was astonished from learning his parents' death to overhearing that his uncle forsaken him and sold his family's company. Though it got worse when Kiba learns that his girlfriend Chie Morishita left him for his cousin Kazuaki. Killing Kazuki in a maddened rage, Kiba attempted to commit suicide but finds himself in a Smart Brain owned mansion and meeting Smart Lady, explaining his current status. When he is called by Chie later, he is heartbroken when she names him the culprit in Kazuaki's murder, outrunning the police before he murders Chie out of scorn.

After finding Yuka, another naturally born Orphnoch, Kiba meets Smart Brain's CEO Eiichi Toda, who reveals more information of the Orphnochs and Smart Brain's goal to make their kind the dominant species and eradicate those who can not become Orphnochs like them. After hearing the genocidal intent, witnessing Naoya being made an Orphnoch, Kiba quickly comes to deplore the organization's tactics and resolved to protect humans and fight Smart Brain after Kyoji Murakami becomes the new CEO. However, Kiba becomes a rival of Kamen Rider Faiz, fighting him every time they encountered one another until they learned each others' true identity and intent as they joined forces. He once uses Takumi's Faiz Gear to fight as Faiz.

After he believed Yuka to have been killed by the police, Kiba turns against his ideals and eventually replaces Murakami as the chairman of Smart Brain. After acquiring the Kaixa Gear, Kiba eventually fought Takumi as Kamen Rider Kaixa before his faith in humanity is restored. In the end, Kiba was mortally wounded by the Arch Orphnoch, grabbing the monster to allow Faiz to kill them both, though only the Arch Orphnoch barely survived.

In the film Kamen Rider Faiz: Paradise Lost, taking place in a world mostly dominated by the Orphnochs, Kiba becomes the primary user of the Orga Gear after being tricked into thinking that he, Yuki, and Naoya are sent on a suicide mission. As Kamen Rider Orga, Kiba battles Faiz in a fighting transitioning from Kamen Rider to Orphnoch. In the end, after Takumi finally gets through to him, Kiba sacrifices himself to hold off the Elasmotherium Orphnoch so Faiz can destroy it. In his final moments, Kiba has Takumi promise to fulfill his dream of peace between the humans and the Orphnochs.

The Horse Orphnoch is one of several Orphnoch who are playable in the Kamen Rider 555 video game.

The Horse Orphnoch appears as a boss in the video game Kamen Rider Battride Wars.

He can take on the form of the Horse Orphnoch, carrying a sword and able to assume a centaur-like Dash Form. He is an extremely powerful Orphnoch, at least as strong as members of the Lucky Clover group, if not more so. In the Paradise Lost ending, Kiba was deceived into using the Orga Gear to fight Faiz, but aided him and died from injuries sustained by the Elasmotherium Orphnoch. However, he was able to wound it bad enough for Faiz to finish it off.

The movie Paradise Lost version of Horse Orphnoch's design called Violent Emotion is dramatically different than that of the TV series. It now sports a more helmet-like head design as the horse snout is pushed upward to allow a more insect/human-like face. The singular horn's enlarged and moved toward the top of its head while its white mane extends much fuller all the way down to the base of its neck/back. Gone is the hoof design on its chest and replaced by a larger and more powerful chest armor. During the last episode of the TV series, Horse Orphnoch evolved into the film version during his final battle with Faiz Blaster Form, but reverted back to his regular TV version prior to his demise.

The Orga Gear gives the wearer the following abilities when they transform.

Kamen Rider Orga (Ω) (仮面ライダーオーガ, Kamen Raidā Ōga) exists in a world where the Orphnochs have taken over the planet and the humans are slowly being exterminated. The Orga Gear was recorded as the fifth Rider Gear created by Smart Brain, after the Faiz and Kaixa Gears were stolen by the humans and the Riot Trooper gear had undergone mass-production. Created alongside the Psyga Gear, the Orga Gear is regarded as a "perfect" gear, and therefore it can only be worn by Orphnoch. SIC Hero Saga Kamen Rider 555 further explain that Orga Belt was originally Created from the original Delta Gear that was retrieved by the Rose Orphnoch from Mihara.

Kamen Rider Orga has a more ornate appearance than any of the previous Gears, the Rider form having robes made of Soul Foam for a majestic appearance. Orga appeared to have immense strength on par with Kamen Rider Kaixa, however it appears to be much slower than Faiz. Unlike Psgya, the Orga gear's weapons are still visible while not transformed, although Orga's sword, the Orga Stlanzer, is not disguised as an everyday household item.

The Orga Gear was given to Yuji Kiba after he had been fooled into thinking he had been betrayed by the humans. He only transformed with the Gear once however, before he was killed by the Beast Orphnoch and the Orga Gear self-destructed.

Armor Information The Orga Armor has several key features in its design. Unlike the Gear, the armor does not exist until the wearer transforms.

When Takumi was revealed to be the Wolf Orphnoch and started going on a rampage, Kiba became Faiz in his place until Takumi regained his senses.

Once transformation is completed, the Faiz Armor has several key features in its design to offer protection to the user. Like all Rider gears, the Faiz armor manifests when the Faiz Driver generates Photon Blood, a glowing substance generates the soft Sol Foam suit, Sol Metal armor, and Fullmetal Lung chest armor via traveling through the red Photon Streams that ends at the Photon Terminals at the gauntlets and Power Anklet greaves, the right Anklet having a Energy Holster that the Faiz Pointer can be connected to. The helmet is unique due to its Global Feeler antenna to link up to Smart Brain's networks and Ultimate Finder visor that gives Faiz incredible vision to see in darkness, giving the illusion of a glowing eye, and a limited amount of x-ray vision.

After being brainwashed into being the new chairmain of Smart Brain, Kiba killed Kusaka and took the Kaixa gear, fighting for Smart Brain, and, by extension, against Faiz and Delta. However, during the final battle against the Arch Orphenoch, Kiba regained his senses, and helped Faiz defeat the Orphenoch King, dying in the process.

Once transformation is completed, the Kaixa Armor has several key features in its design to protect protection to the user. Like all gear, the Kaixa armor manifests when the Kaixa Driver generates Photon Blood, a glowing substance generates the soft Sol Foam suit, Sol Metal armor, and Fullmetal Lung chest armor via traveling through the two yellow Photon Streams lines that gives Kaixa greater strength at the cost of speed. The steams end at the Photon Terminals at the gauntlets and Power Anklet greaves, the right Anklet having a Energy Holster that the Kaixa Pointer can be connected it. The helmet is unique due to its Global Feeler antenna to link up to Smart Brain's networks and the X Finder visor that gives Kaixa incredible vision to see in darkness, giving the illusion of a glowing eye, and a limited amount of x-ray vision. 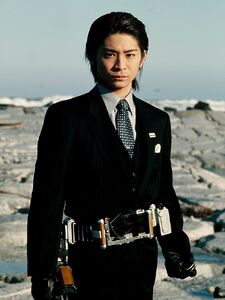 Kiba as president of Smart Brain.
Add a photo to this gallery 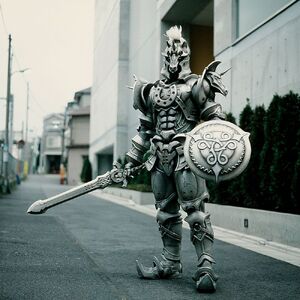 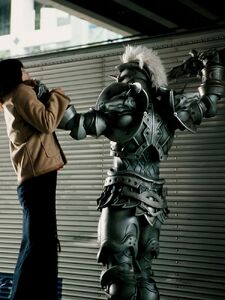 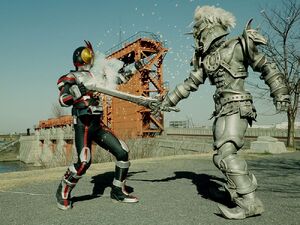 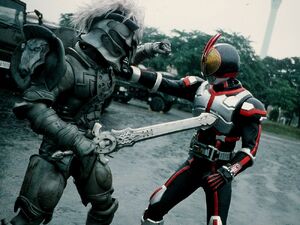 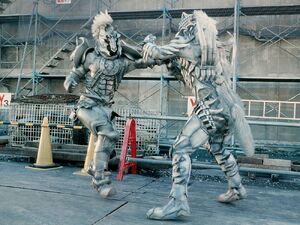 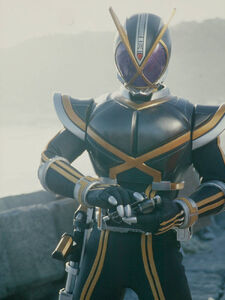 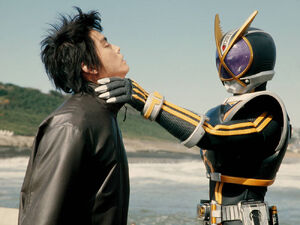 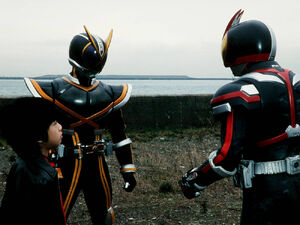 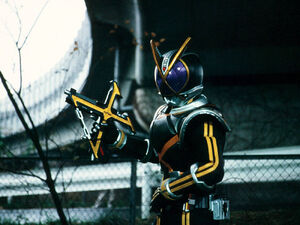 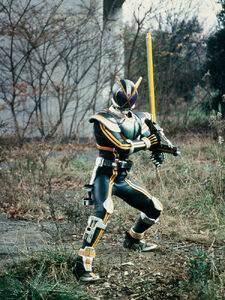 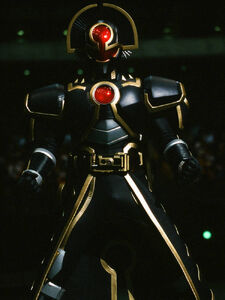 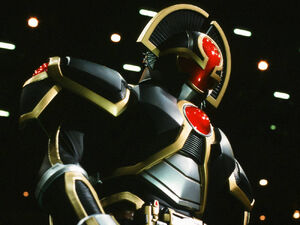 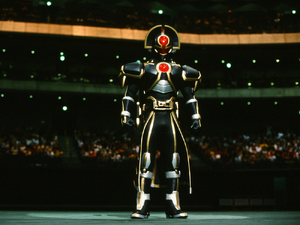 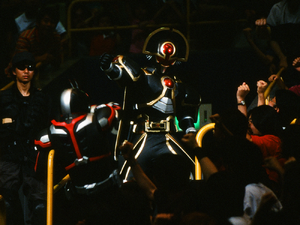 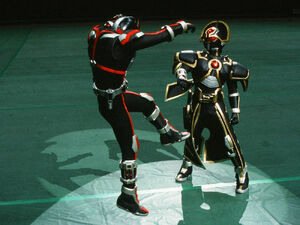 Retrieved from "https://villains.fandom.com/wiki/Yuji_Kiba?oldid=4047912"
Community content is available under CC-BY-SA unless otherwise noted.