Member of the White Fang

Serve the Albains and Adam Taurus.

Yuma is a minor antagonist from the ongoing American cartoon web series RWBY. He is a bat Faunus and member of the White Fang under Adam Taurus.

He is voiced by Nick Landis, who also voices Vegeta in Dragon Ball Z Abridged.

In the episode "Necessary Sacrifice", Yuma is summoned by Corsac and Fennec Albain. He was sent after a messenger Ghira Belladonna had sent with a warning to Mistral, telling them the White Fang planned to attack Haven Academy. He reports that the message will not be received, indicating that he murdered the messenger.

In "Alone Together", Yuma assists fellow White Fang Members Ilia Amitola and Trifa in setting a trap for Blake Belladonna. He ambushes Blake and kicks her to the ground, injuring her so that Trifa can capture her in her webbing. Ilia then threatens Blake and reveals Adam and the Albains' plan to kidnap her and send her to Adam in Mistral, while also attacking and killing her mother and father. Ilia and Yuma leave to aid in the assault on the Belladonnas. Blake later escapes with help from her friend Sun Wukong and rushes off to save her family. However, he gets knocked unconscious by Kali being subdued and later arrested along with the other White Fang members following the attack.

Yuma, like the rest of the White Fang, despises humanity and wishes to see their subjugation or eradication. However, he is not above attacking or even killing fellow Faunus i they do not support his cause. He is also sadistic, as he grins with pleasure upon hurting, capturing, and threatening Blake. He sees Blake and other Faunus who do not support them as traitors, and has no qualms about hurting them. He is also loyal to his cause and follows orders from his superiors without question. 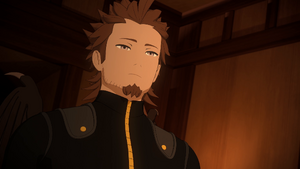 Yuma reporting to the Albains. 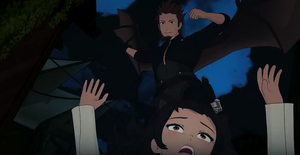 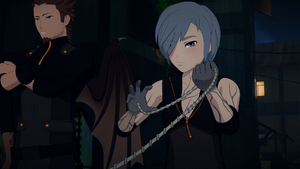