General of the Royal Army

Have Colonel Sandesh and his expedition team retrieve the secret relic of Yalung, and use its powers to use against the enemies of the Royal Guard and Pagans regime (all failed).

General Yuma Lau is Pagan Min's second-in-command and the secondary antagonist of the 2014 video game, Far Cry 4. She is the general of the Royal Guard as well as the warden of Durgesh.

She was voiced by Gwendoline Yeo, who also voiced Mercy Graves in The Batman, and Nala Se in Star Wars: The Clone Wars and Stars Wars: The Bad Batch.

Yuma Lau was orphaned when her parents were killed during raid by task force because her father was a triad boss, Yuma was adopted by Gang Min who is Pagan Min's father and became close to Pagan. The two had a close friendship, and she would see him as a brother and Gang as a father-figure since he took her in to repay a debt to her late father. Yuma had received the best education from her school and grew up to idolize Pagan Min as brother figure. Pagan encouraged Yuma to become intelligent and a ruthless killer and he even gave heads of three men as present of her 18th birthday, for them trying to steal her father's inheritance.

Appreciating his dedication and owing him a debt, Yuma used her father's inheritance to assist Pagan to create a group to take over Kyrat. Yuma remained loyal to Pagan, but he fell in love with Ishwari Ghale who was Mohan's wife, and Lau attempted to prevent him from becoming weak due to Ishwari's love. In which Yuma fought for his affections, but found that Pagan became weak and more broken after Ishwari left Kyrat to the United States with her son, Ajay. Seeing that Pagan was damaged beyond repair, Yuma started to despise him, and became obsessed with the legend of Kalinag and his journey to Shangri-La. Yuma started to seek the power of Shangri-La, but also became embittered and thought about leading her own group against Pagan.

Before the events of the game, Yuma became the warden of Durgesh, a prison where she kept prisoners and gave them drugs that caused them to hallucinate. Due to her ruthless nature and sadistic tendencies, Yuma used the drugs to manipulate and torture her victims, and the prisoners were left psychologically scarred. Becoming known as "the spider", Yuma became known as Pagan's enigmatic second-in-command that operated in the northern part of Kyrat. In addition, Yuma would also send her men on expeditions to find the Thangka of Shangri-La, which was owned by the Ghale family but was now placed across Kyrat.

Yuma is mentioned by CIA agent Willis Huntley, who orders Ajay Ghale to eliminate her "lieutenants" to get her attention in the south. After Huntley betrayed Ajay, he was captured by Pagan and Yuma, and taken to the Durgesh prison. Pagan speaks to Ajay, and has one of men inject him with a syringe, causing him to have hallucinations.

During his hallucination, Yuma is heard speaking, telling him how Shangri-La was found, and how she has come to despise Pagan due to Ajay's mother taking him from her. If the player is killed by the Rakshasa before they collect the two pieces of a grappling hook, Ajay will awake in his cell and be confronted by Yuma. She will taunt Ajay by telling him that she didn't kill Mohan, but she would have killed Ishwari if she had the chance. After telling her off, Yuma will tell Ajay to jump off the cliff, and if he does so, she will scatter Ishwari's ashes.

Ajay managed to escape from the prison and was rescued by the Golden Path, and the group decide to make Yuma their next target after breaching to north Kyrat. Later on, Pagan reveals Yuma's location on a public broadcast due to him thinking she has become a liability due to her using his resources and obsession with Kyrati mythology.

Yuma is confronted by Ajay in the Keo Svargiya mine, and she gives another hallucinogen and attempts to seduce him. Yuma battles Ajay, who hallucinates her as Kalinag. During the fight, she is stabbed to death by him, and awakes form his hallucination to realize what he has done. 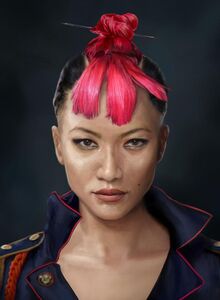 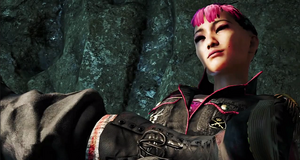 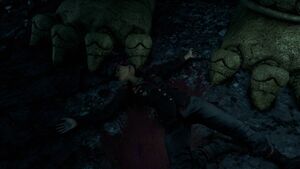