Live happily ever after.

Psychopathic Teenager
Yumeno Kyusaku (in Japanese: 夢野 久作, Yumeno Kyūsaku) is a minor member of the Port Mafia in the manga and anime series Bungou Stray Dogs. They are a fictionalized version of the Japanese author with the same name.

Q is rather hedonistic. Ever since being released, their main motivation is generally pure boredom. They gain a certain amount of sadistic satisfaction from using their power to cause harm.

They've been considered 'too demented' even by the Port Mafia's standards. The Port Mafia, which has no lack of crazy characters making up the infantry, had to forcefully imprison them in a conflict that resulted in heavy fatalities for the Port Mafia.

When forced to the defensive, however, Q acts much like a normal kid. Unlike most characters in their universe, they are easily overwhelmed by pain and doesn't infrequently cry. They have stated that "all they wanted was to live happily" and "the ability they were born with has gotten in the way of that"

At some point, they ended up being cared for by Ougai Mori, the leader of the Port Mafia, along with Dazai Osamu. Their demented, child-like state of mind and their dire ability scared the Port Mafia, causing them to seal them away. They caused multiple deaths in the conflict during their incarceration.

They were only let out when the Port Mafia's situation got dire in the three-way war with the Armed Detective Agency and The Guild. The mafia didn't even attempt to try and control them, they simply let them go rogue.

They planned on killing the ADA first, saving Dazai Osamu for last. Their first three victims were Atsushi, an inexperienced but gifted combatant of the ADA, Naomi, and Kirako, both of which were powerless non-combatants. They did this by controlling Atsushi to attack both Naomi and Kirako (From Atsushi's perspective, he thought Naomi and Kirako were the people being controlled). These three were saved by Dazai Osamu when he nullified the ability. Yumeno responded to this by taunting Dazai before leaving without further conflict.

A week later, Q was bored and ended up bumping into H.P. Lovecraft. They outright asks Lovecraft to entertain them. They attempted to use their ability on Lovecraft, but, to Q's shock, Lovecraft was immune to his ability. The "fight" ended with Q being captured and brought to The Guild.

Q was later seen fully restrained by John Steinbeck's tree, suffering from immense pain and crying. The Guild planned to use a combination of Q's and Steinbeck's powers to destroy the entire city of Yokohama. This was done by using the strange property of Steinbeck's tree to siphon all harm caused to the connected trees into Q's body. Anyone who harmed any trees in Yokohama would harm Q. This, being the first of two triggers needed to activate Q's ability, set up a massive portion of the city to be controlled. When the doll was broken, the second trigger, the entire city was thrown into chaos. Dazai and Chuuya successfully work together to nullify the ability, saving the city. They then capture Q, who is unconscious from the pain. It is assumed that Q is detained again. 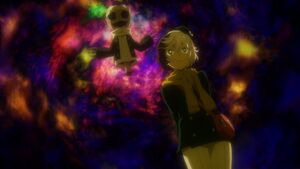 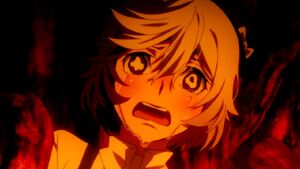 they cryin bcz steinbeck beat the shit outta them 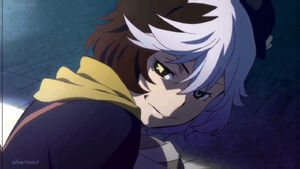 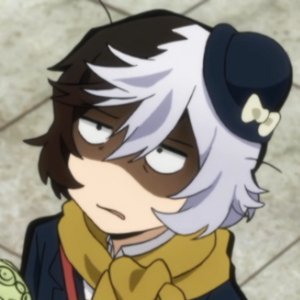 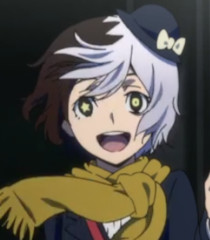 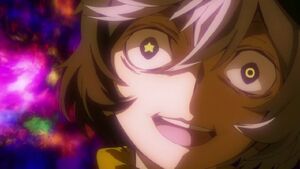 they are going to Beat The Shit Out Of You
Add a photo to this gallery
Retrieved from "https://villains.fandom.com/wiki/Yumeno_Kyusaku?oldid=3538833"
Community content is available under CC-BY-SA unless otherwise noted.