Member of the Aogiri Tree
Direct Subordinate of Tatara

Make ghouls the dominate species and overthrow humanity, Destroy the CCG, Obey the orders and wills of Tatara

Right-Hand / Swordsman / Terrorist
Yumitsu Tomoe (巴, Tomoe), also known as the Grave Robber (墓盗り, Hakatori) and Quinque Hunter (クインケ狩り, Kuinke Gari) is a character from Tokyo Ghoul:re. She's a ghoul and is a member of the Aogiri Tree as well as a direct subordinate of Tatara.

Tomoe is a tall and slim woman with black hair with ponytails on both sides. She wears a large dark red robe similiar to that of other Aogiri members with a white squared color. Her mask is white with a one-eyed design with teeth-like shapes at the bottom.

Tomoe is a fighter and loves it. She's interested in fighting and is wiling to take on any opponent such as other Bikaku users like her whenever she gets the opportunity. She finds fighting against Bikakus and other similiar RC users like the Quinx entertaining even if they're more powerful than her. She has a habit of collecting Quinques despite being a ghoul.

Tomoe is first seen where she is amongst one of the Aogiri members hired by Karren von Rosewald to eliminate the Quinx Squad and lies in a parking garage isolated and waiting to set up a trap. She then springs into action when she sees Karao Saeki getting attacked by Tooru Mutsuki and she rescues Saeki from Mutsuki. She manages to overpower Mutsuki until Kuki Urie arrives and beats her off forcing her to retreat along with the others. She's later on seen with Hooguro and Shousei, where she's mocking them for their defeat. 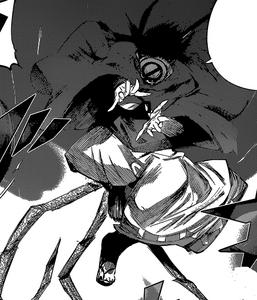 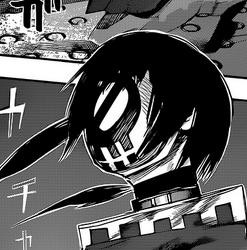 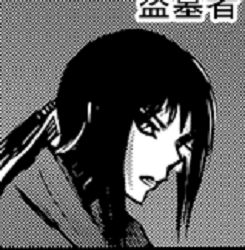