Member of the Moro Corps

Member of the Galactic Bandit Brigade

Help Moro find planets to increase his power and destroy law and order.

Yunba is a supporting antagonist of the Galactic Patrol Prisoner Saga in Dragon Ball Super. He is an elite member of the Moro Corps.

Yunba is a large, portly being almost resembling that of a humanoid bear, complete with two small rounded eyes at the top of his head.

Yunba is very gluttonous and highly greedy as he has a large appetite (with Shimorekka stating that he has "food on the brain" and nothing else), only being concerned for the "yummy treats" a planet has and the rare treasures and other valuables.

Yunba first appears in the Galactic Prison with the other prisoners, and is released by Moro's second wish, they then proceed to take over the facility and re-secure Saganbo's Ship, so they can use it to head to New Namek.

Yunba accompanies Moro and several other members of the Galactic Bandit Brigade to Zoon, where they attack the warriors guarding the royal treasure, during which Yunba wields a large weapon places on his shoulder which he uses to kill several of the Zoon-seijin before carting Zoon's Royal Treasure back to their ship.

After Moro and Saganbo receive a report of powerful life-forms on Earth from theMacareni Gang, Yunba is deployed alongside Shimorekka and Seven-Three. On their way there Yunba begins to complain about wanting food, leading them to stop on a planet inhabited by porcupine-like aliens, Seven-Three copies their powers and kills them while Shimorekka and Yunba eat their food. Seven-Three then notices one of them with a portal creating ability getting children to safety and promptly copies the ability, he then uses it to go to Earth alongside Shimorekka and Yunba, appearing on The Lookout. When the confrontation begins, Piccolo and Jaco confront Seven-Three and Shimorekka on the land below.

Krillin attempts to rush to their aid but is grabbed by the ankle by Yunba before he can get away. He pressures Krillin with a barrage of punches that shock the earthling because of the sharpness of his attacks despite his rotund appearance.Mr. Satan goes to help Krillin but before he can, Yunba bounds into the air, curls into a ball and launches himself at Krillin that sends them both straight through the sanctuary. Yunba soon abandons his fight with Krillin upon seeing his comrade Seven-Three being overwhelmed by Gohan and joins his side. When Sevn-Three uses Moro's abilities and absorbs the energy from Gohan and the others, Yunba and Shimorekka beat on them until they ordered to return to the ship by Saganbo.

Two months later, Yunba returns to Earth along with Moro and the rest of the gang and is one of the members who scatters off in order to search for some of the planets treasure. Krillin, along with Master Roshi, appear to confront him though Master Roshi soon goes off in chase of a trio of female criminals instead. Yunba then continues to fight Krillin in a one on one battle.

Krillin launchs his Destructo Disc Hexa Blade at Yunba, though he deflects them through rotating his body at an extreme speed. Landing several hard attacks, he knocks Krillin down hard to the ground, but he is able to stand to continue the attack. When Yunba dodges another incoming wave of Destructo Discs, they seemingly strike Krillin, but he had in fact used his Afterimage Technique to fool his opponent before appearing behind Yunba and landing a powerfulKamehameha that knocks him out cold. Afterwards, the Galactic Patrol members placed him on their ship where they were to return him to the Galactic Prison. 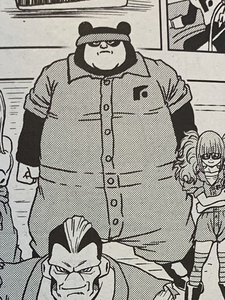 Retrieved from "https://villains.fandom.com/wiki/Yunba?oldid=3629234"
Community content is available under CC-BY-SA unless otherwise noted.