God of the 1st world (formerly)

Doing anything for Yukiteru's love, even if it means killing anyone related to him.

Observing Yuki through her diary.

Keep the universe in an eternal time loop, thus replaying the Diary game to stay with Yukiteru (formerly).

Win the Diary Game.
Kill anyone as a threat to her and Yukiteru's relationship and tie up all loose ends.
Be with Yukiteru forever. (all succeeded)

Yuno Gasai is the main protagonist of the anime/manga series Future Diary. She is the second diary owner in the Survival Game, and she is the owner of the "Yukiteru Diary/Diary of Future Love", and a yandere who has an obsessive crush on Yukiteru Amano.

She was voiced by Tomosa Murata in the Japanese version of the anime, and Brina Palencia in the English dubbed version.

Yuno began life fairly normally. The only strange part was her own adoptive mother's obsession with her success. This went as far as extreme regulations including a strict diet, and even locking her in a cage if she did bad or failed in one of her classes. Mrs. Gasai did this due to neglect from her husband, who ironically stayed at work more to avoid the increasingly dysfunctional behavior of his wife. This is when Yuno snapped, locking both of her adoptive parents in the cage until they starved to death in the original Earth.

She had initially intended not to kill them, only force them to go through what her adopted mother had forced Yuno through and hopefully get them to apologize for the abuse. They remained unrepentant however, with Mrs. Gasai going so far as to yell that she wished they never adopted Yuno; Yuno decided to leave them in longer, and one day discovered that they had died. After joining up in the survival game, she and Yukiteru work together and defeat all the other diary owners. However, when it was just the two of them left, they decided to ingest cyanide and commit twin suicide, as only one of them could live and claim the power of God, and at that point they couldn't stand the thought of living without one another.

Yuno, however, only pretended to consume hers, hoping to bring back Yukiteru after she replaced Deus. However, after discovering that even Deus could not bring back the dead, she snapped, decided to restart the Earth, killing the Second Earth's Yuno and her adoptive parents, leading to the events in the series.

As seen in OVA, 3rd world Yuno gained a happy life with her parents because of climax of Mirai Nikki. But then, is bothered by something which missing in her life. That's until she enters the corridors of Cathedral of Causality for the first-time thanks by Minene. Both were intercepted by Akise and 3rd world Muru-Muru. Yuno escapes while Minene hold Muru-Muru, and eventually found confined 1st world Muru-Muru, who had turned the corpse of 1st world Yuno into an energy ball that she then consumed, gaining all of 1st world Yuno's memories and feelings in the process. From this Muru-Muru, she eventually learned the truth about Survival Game, Amano Yukiteru, and her insane 1st world counterpart, gaining all that Yuno's memories, divine powers, and feelings in the process while maintaining her own mental and emotional stability.

After learning everything, she quickly found Amano Yukiteru (literally hacking through dimentional barriers with an axe to reach him) and they embraced each other, receiving their happy ending together. The last scene showing them reveals the two of them concentrating to create a small tree out of nothing, beginning the long road towards restoring the 1st world that the original Yuno had abandoned to destruction.

Yuno Gasai is a young girl with pink eyes and long pink hair styled in pigtails, two hanging as frontal locks featuring a pair of red bows, and the back pigtails left bare. Her most common attire consists of a blue shirt with a ribbon on her chest accompanied by a blue skirt with high socks, but her wardrobe changes occasionally throughout the series.

Yuno Gasai Is deranged, psychotic, and misanthropic person. On a surface level, Yuno seems to be quite sweet and somewhat shy around Yuki. However, anyone must dig beneath the surface and so anyone must find the textbook example of a Yandere: psychopathic, obsessed, and cold. When the going gets tough, Yuno often resorts to extreme violence in combat. She is also rather jealous, furious when Tsubaki Kasugano and Aru Akise kissed Yuki.

It is later revealed that her insane and psychotic self was a result of horrific and unpropitious circumstances in her life, with her absent father and evil mother being the main cause. After they both perished, Yuki provided the needed emotional support. Her love for him quickly grew into madness.

Despite her insanity, Yuno is reserved to killing. This is shown when, after Yukiteru calls her his girlfriend, she instantly lets Hinata go when she intended to slit her throat. The fact that she did this rather than killing her anyway suggests that she doesn't actually enjoy killing, but does it because there's no other option in her damaged mind. It is shown many times in the series just how deeply insecure Yuno truly is when she says her life wouldn't be worth living if she couldn't be the centre of Yuki's world. Her crippling fear of losing him is notably the only thing that can cause her usually disturbing composure to crack.

Yuno wields the Yukiteru Diary, which can tell her everything that happened to Yuki in 10-minute periods. Although it has low combat potential, it has great synergy with Yuki's diary. Yuno also makes up for her low supernatural power with physical power. Yuno is quite resourceful, is extremely smart, skilled in making traps, and has fine expertise in standard combat, especially with using bladed weapons. Yuno also has some know-how on poisons and drugs, and is quite stealthy. With all her traits, most consider her a fierce opponent. 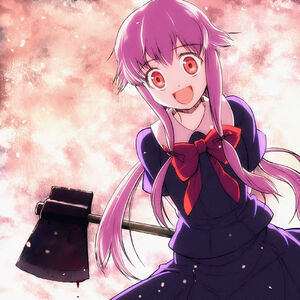 Yuno in the manga. 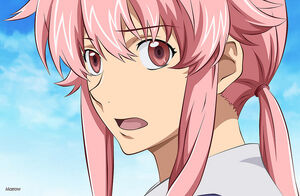 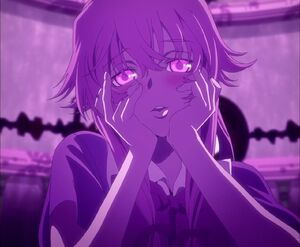 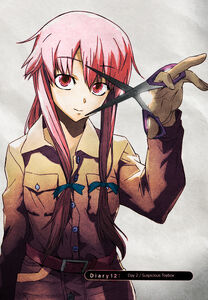 Yuno in a military suit.

Yuno in her swimsuit. 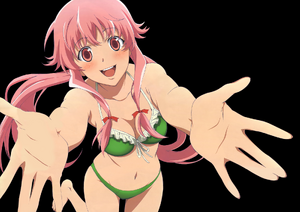 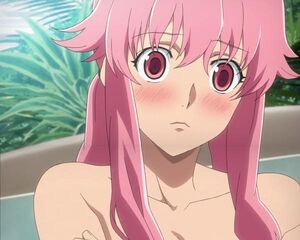 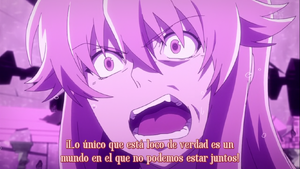 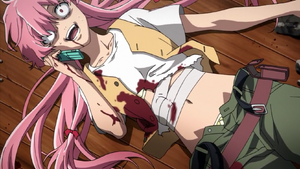 Yuno after stabbing herself.