Try to get the main character to be her "lover" (failed).

Yuri is the secondary antagonist of the 2017 visual novel Doki Doki Literature Club!. She replaces Sayori as the Vice-President in Act 2 after she is deleted by Monika during the end of Act 1.

While Yuri may have been a caring individual in Act 1, her personality shifts in Act 2 to that of an obsessive yandere as a result of Monika tampering with the game's code.

Throughout Act 1, Yuri is noted to be extremely beautiful. She has purple hair and wears the same school uniform as the other three girls. Outside of school, she wears a turtleneck sweater.

In Act 2, her face often appears scrambled. Her eyes, usually a bright orchid, will widen when she's highly stimulated, and sometimes turn a duller shade of purple, taking on a hyperrealistic appearance and moving independently of the rest of her sprite.

One of her early Act 2, glitches gives her a "dragon" form, where her hair is black, her uniform blouse bright red, and her eyes a darker red with slit pupils.

Though usually very shy and overly apologetic, Yuri can be very talkative and enthusiastic when it comes to her favourite subjects. For this reason, Yuri has trouble making and keeping friends, as she tends to come on too strongly. Yuri eats lunch alone at school, but claims she has company in the characters in her books. To that end, Monika warns the player that they may have trouble pursuing her, as Yuri probably has a fictional boyfriend.

In Act 2, Monika amplifies Yuri's obsessive tendencies in order to make her seem less attractive to the player. Afterwards, Yuri finds herself increasingly excitable around the main character, and several times begins cutting herself. Monika suggests she may do this for the endorphin rush it provides. It is also possible that she may derive sexual gratification from blood, knives, or sadomasochism (sexual feelings from sadistic and masochistic situations) in general.

During Act 3, Monika claims that Yuri is an example of the yandere character archetype. 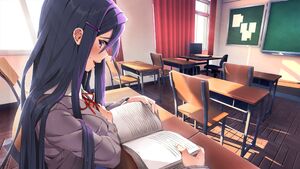 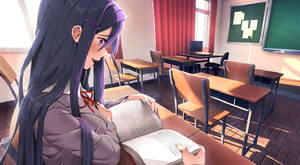 Retrieved from "https://villains.fandom.com/wiki/Yuri_(Doki_Doki_Literature_Club)?oldid=3591977"
Community content is available under CC-BY-SA unless otherwise noted.