A Good Day to Die Hard

Manipulate John and Jack into helping him escape Chagarin's hitmen.

Get revenge on Viktor Chagarin (both succeeded).
Defeat and kill Jack and John McClane after outlived their usefulness.
Recover and sell his weapons grade uranium from Chernobyl and regain control of Germany (all failed).

Yuri Komarov is the main antagonist in the 2013 action film A Good Day to Die Hard.

He was portrayed by Sebastian Koch.

Komarov's former partner Viktor Chagarin, a high-ranking but corrupt Russian official, plans on incriminating him without a fair trial when Komarov refuses to hand over a secret file believed to have convicting evidence against Chagarin. Jack McClane is arrested as a result of an assassinating Chagarin's associate, Anton but agrees to testify against Komarov for a shorter sentence.

When John McClane arrives and approaches the courthouse that holds Jack and Komarov on trial, an explosion orchestrated by Chagarin and his henchmen occurs in the courthouse, and Jack breaks free with Komarov. Hiding in a safe house, Mike Collins, Jack's partner, demands the file's location from Komarov so that the CIA can bring Chagarin down. Komarov says that it is located in a vault in Pripyat, Ukraine and the key to the safe in a hotel name Hotel Ukraina. He calls his daughter, Irina, telling her to meet him where her mother and him had their first date. Irina agrees, but before they can leave, Collins is soon shot to death by Chagarin's assassins, although McClane picks up a machine gun and fights their way out of the safe house as Jack bombs the wall open to get out of the safe house.

As they reached the alley, Jack patches up Komarov's arm and McClane gives him his jacket to keep him warm. Afterwards, they went to the hotel and Jack left to check out the area. At this point, Komarov and McClane take some time while Jack is retrieving something to talk about the mistakes they have made. Komarov says that he has always felt guilty of never spending enough time with his daughter when she was a child, because he was always working with his side business as well as his business partner, Chagarin. McClane attests to this, saying that he also feels guilty for not spending enough time with his son as well as his daughter because he thought his job as a cop was always a good thing. At this point, the two men seem to bond here over the importance of family in their lives, and for a moment, the two have something in common. Jack hears this, and the trio then make their way to a hotel in the city to find the key to a vault containing the file.

There, they meet Irina. After their reunion, Komarov gets the key to the vault that was hidden in the ball room's air cooler, but Chagarin's enforcer Alik and his men crash in and tie John and Jack up, while Komarov is taken as a hostage. At this point, Irina is revealed to be in cahoots with Chagarin's men, and holds a pistol to her father's head and confesses to selling out her own father for the "millions of dollars" to be gained. They take off in a helicopter and fly away to Chernobyl, Ukraine, which is the apparent location of the vault that houses the file, as revealed earlier by Komarov at the safe house.

It is revealed that there was never a file, and that the drawer that supposedly contained the file was actually the secret passage to a vault containing a large amount of weapons-grade uranium canisters. When the three enter the room, Alik demands to know where the file is, only to be suddenly killed by Komarov with a swift gunshot to the side of the head. Komarov and Irina embrace, revealing that the two had manipulated the entire scheme from the beginning in order to fool everyone into gaining access to the uranium. Komarov then calls Chagarin and informs him of this, revealing that the purpose of this was to get revenge on Chagarin for his betrayal. Chagarin is then killed by a subordinate of Komarov's in disguise as a masseur with a choke hold. A pleased Komarov happily listens to his agonized cries of pain over the phone as Chagarin is strangled to death and hangs up, his revenge mission was finally completed. He then tosses the cell phone to the wall which destroys it to bits.

At this point, John and Jack enter the vault and become suspicious as they see a large shipment coming out of the vault when it is only supposed to be single file. Komarov tries to pretend that he is a hostage, but after seeing Alik's body, McClane and Jack discover Komarov's true plot as he recognizes the uranium canisters and capture him learning there was no evidence against Chagarin. Irina, with another henchman, comes to her father's aid. Komarov then retreated to the roof. But before they can escape, Jack goes after Komarov, while John goes after Irina, who is escaping on a Mil Mi-26 helicopter.

Irina tries to protect her father by firing the helicopter's cannons at Jack, but John is able to bring the helicopter out of balance by driving a truck in the hangar section, still shackled by a chain, out of the open rear ramp of the helicopter. Komarov remarks that Jack will get to watch his father die, and Jack furiously says that so will Irina, and hurls him off the rooftop, where Komarov falls into the spinning helicopter's rotors and is killed. 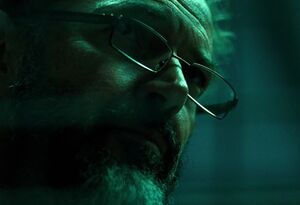 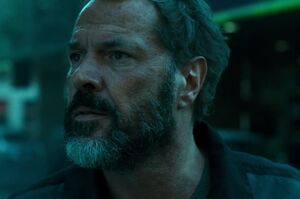 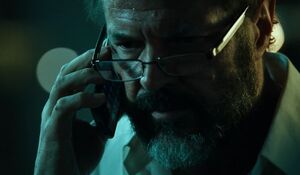 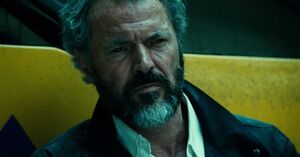 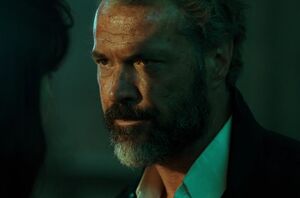 Komarov with his daughter Irina 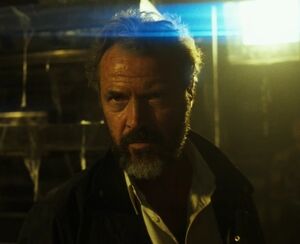 Komarov revealing that he is in charge. 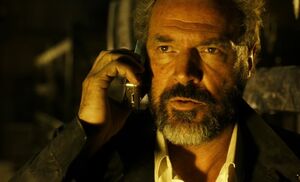 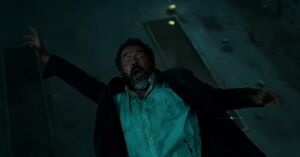 Komarov being hurled off a rooftop. 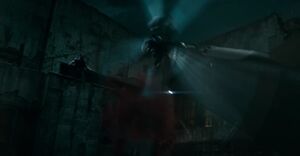 Komarov's gruesome demise.
Add a photo to this gallery

Retrieved from "https://villains.fandom.com/wiki/Yuri_Komarov?oldid=3544595"
Community content is available under CC-BY-SA unless otherwise noted.