Dropkick on My Devil! (Jashin-chan Dropkick)

Torturing Jashin whenever she gets out of line.

Torture Jashin if she steps out of line.

Yurine Hanazono is the co-protagonist of the 2018 comedy series Jashin Dropkick (Dropkick On My Devil!).

Yurine is a college student who wears Lolita-attire and dabbled in dark magic. One day, Yurine unwittingly summons Jashin a self-proclaimed "evil goddess" from Hell. Upon realizing that Yurine did not know how to reverse the spell, Jashin spent a duration of her time devising ways of killing Yurine so that she could return to Hell.

Unfortunately for her, Yurine had an extensive assortment of dangerous weapons which she relentlessly uses on Jashin whenever she got out of line. While there are several moments in which Jashin deserved repercussions for her several murder attempts, Yurine takes immense gratification out of bludgeoning Jashin. For instance, when Jashin was complaining that it was hot outside, Yurine ties her to a rope over the bathtub and cut her so that her blood could drip into the tub. She even tortured Jashin when she would claim that her pet demon dog Bate would bite or scratch her.

Another example of Yurine torturing Jashin for flimsy reasons is when Minos - a cow demon girl - gives Yurine a mandrake. After getting into a fight with Minos, Jashin accidentally falls onto the mandrake, smothering it to death. Having taken a liking for the plant, Yurine subjects Jashin to punishment by forcing her to mimic the death cry of the mandrake by placing weights on her. Yurine also indulges in chopping up Jashin's tail and offering the sliced meat to her friends or Bate.

Despite her hostility towards Jashin, Yurine acts generally kind to others such as offering food to the fallen angel Pekola and even offering to allow her to stay in her apartment room even though Pekola views her as a witch due to her assuming that she was in league with Jashin. 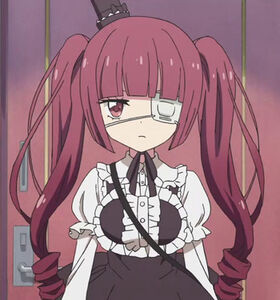 Retrieved from "https://villains.fandom.com/wiki/Yurine_Hanazono?oldid=3815114"
Community content is available under CC-BY-SA unless otherwise noted.