The Sultan of Amir

He was voiced by Omid Djalili, who also voiced Anthony Trumper in Shaun the Sheep Movie.

At some point he moved from Dubai to Liberty City to further develop luxury properties. His first project's construction site was locked down by Messina Family construction unions, until Playboy X hired Niko Bellic to kill them all hoping to gain favor with Yusuf. He would not meet with Playboy, instead temporarily shutting down the site and building a memorial for the workers.

Events of The Ballad of Gay Tony

In The Ballad of Gay Tony, Yusuf finally becomes a major supporting character. He wants to franchise Gay Tony's nightclub Maisonette 9, and hires Prince's bodyguard Luis Lopez as a mercenary. He takes a very fast shining to Luis in particular, seeking to impress him with his possessions and sometimes white lies (for example, in High Dive he claims that one week ago he was exhausted from test driving "sexy cars" and for two weeks, flew to Vice City with prostitutes). After only meeting Luis twice in Sexy Time, he is quick to say that they are like "brothers". Towards the end of the game, he gives Luis his gold-plated Super Drop Diamond (with a powerful gun in the glove compartment) and brings his Buzzard to aid Luis in a large gunfight, somewhat rare and profound of his otherwise selfish nature.

Yusuf is used as a plot device to symbolize extreme wealth, materialism and the temptation for Tony and Luis to sell out their beliefs (especially towards the ending). Unlike Ray Bulgarin, whose character shares some of these themes, Yusuf is a good guy in that he is clearly out to help Tony and Luis, as well as a more lighthearted comic relief. 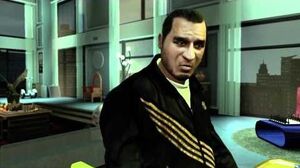