Stealing the souls of those who disobey his bylaws.

Enforce the rules of AGHS.

Yuta Sugiura (also known as the Taurus Zodiarts) is one of the Horoscopes and a major antagonist in Kamen Rider Fourze.

He was portrayed by Kenta Itogi.

A member of the AGHS Student Council, Yuta Sugiura had a crush on the Student Council President Sayaka Mibu but argued with Sayaka over changing the school rules. Sugiura believed the students deserved more freedom, while Sayaka wanted stricter rules. However, when several students began to abuse their freedoms, Sayaka went to confront them and was shoved down a flight of stairs, resulting in her being hospitalized. While Sayaka was in the hospital Sugiura became acting student council president. After being given the Taurus Switch, Sugiura began making changes to the school rules to make them stricter for her, enforcing a rigid dress code and limiting the individuality of the student body.

Gentaro and JK challenged Sugiura in order to free the school from his rules and Sugiura accepts their challenge, allowing the two to choose the type of competition. Both of them choose their specialties (break-dancing for JK and Double Dutch for Gentaro), but Taurus is able to both beat them at their own games, forcing them to follow by his new rules. The Taurus Zodiarts later battles Kamen Rider Meteor but as Taurus was about to defeat Meteor, the Virgo Zodiarts intervenes, stating that having Meteor under his control could be quite useful. Thus, Meteor agrees to a competition for the freedom of Amanogawa, a round of golf, Sugiura's favorite game.

Despite Yuta having more experience, Meteor's manages to win the match through hard work. Furious he was beaten, Yuta goes back on his agreement and attacked Meteor. However, after Sayaka confronts him and deliberately breaks the school rules, Sugiura gives up enforcing his rules and apologizes to student body. After becoming friends with Gentaro, Sugiura is faced the Virgo Zodiarts, who gives him a final chance to redeem himself. However, Sugiura refuses to continue working with the Horoscopes and transforms into the Taurus Zodiarts to face him. Virgo simply sends him to the Dark Nebula and takes his Taurus Switch to give to Gamou.

Sugiura is later revealed to be alive, but in suspended animation in the M-BUS. 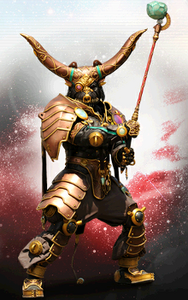 Taurus Zodiarts
Add a photo to this gallery

Retrieved from "https://villains.fandom.com/wiki/Yuta_Sugiura?oldid=3067187"
Community content is available under CC-BY-SA unless otherwise noted.