Yutaka Kazami, also known as Dane Gustavia, is the secondary antagonist of Ace Attorney Investigations: Miles Edgeworth: Prosecutor's Path, serving as the main antagonist of the episode "The Inherited Turnabout". He is a pastry chef who took part in Jeff Master's confectionery contest in 2000.

Note: Translated names will be used for convenience.

Gustavia specialized in making candy into various shapes by using candy pumps to fill them with air and then molding them however he had trouble with the taste due to Dysgeusia. With his issues, he makes his son as his taste tester. One day, Jeffery Masters announced a competition with the prize being The Angel's Recipe which would help cure his illness. He entered the competition alongside Isaac Dover as his collaborator. Unfortunately for Gustavia, Dover was planning on betraying him by cutting off his ties with him. Desperate, Gustavia cheated his way to the prize by taking the pictures of the Angel's Recipe after breaking into Master's room. Catching him in the act, Dover planned to tell the others about his misdeed which led to him murdering his fellow contestant and attempted to pin the plame on Delicia Scones. This is became known as the IS-7 incident which unintentionally pinned the blame on Masters for 18 years after Gustavia hid his body inside an ice sculpture. He would go on with his dreams to be a better pastry chef during his time abroad in Zheng Fa for training before returning to the United States to kickstart his career.

Gustavia would eventually find himself back at the crime scene when Katherine Hall planned to bring the ice sculptures in for display. Panicked that the body would be discovered again, he planned to retrieve it only for poison gas to be released from the sculpture nearly killing him. After Katherina Hall's attempted murder was uncovered, Edgeworth questioned Gustavia about his past which led them to discovering that he's the true culprit behind the incident. Gustavia laughed and confessed after pointing out that the statute of limitations has officially passed rendering him legally innocent for wrongdoing. However, after some encouragement from Ray, Edgeworth pursued on and realized that while it may have passed, it didn't pass for Gustavia due to a couple of legal extensions based on the case and Gustavia's actions. After realizing there's nowhere left to run, he proceeded to sculpt a statue of himself before cutting it in half as he's taken away and eventually tried for his crimes.

Before Gustavia was revealed as the killer, he came across as an aloof and stoic, yet helpful and cordinal man, who wasn't incredibly gifted in confectionary but still found joy in it. In reality, he was an opportunistic and selfish man who saw people as tools to help further his own ends. After regaining his taste and murdering Dover, he abandoned his son and fled the country, leaving the innocent Jeffrey Masters to take the fall.

When encountered in the present, he had become far more cunning and crafty, as well as a far better confectionist. He retained his dismissive aura but was far more aggressive and arrogant, believing himself to have gotten away with murder. His selfishness had only grown over time, as he solely blamed Katherine Hall for poisoning him, despite only getting poisoned due to trying to remove Isaac Dover's body to avoid suspicion.

His arrogance turned out to be his downfall, as Gustavia gloated to Edgeworth that he did indeed kill Dover, but couldn't be prosecuted due to the statute of limitations. Unfortunately for him, as he had left the country for several years, he was still within the statute, leading to his arrest for the murder. 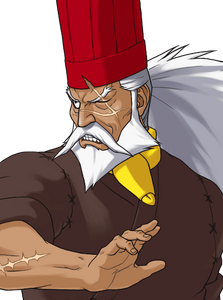 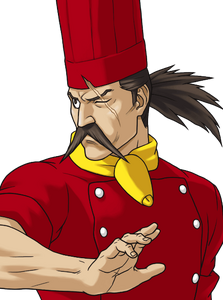