Carry out missions given to them by the Fire Nation.

Militarisic Archers
The Yuyan Archers are a group of elite and skilled archers that served the Fire Nation and are villains in Avatar: The Last Airbender. The Yuyan Archers are the secondary antagonists of the Season 1 episode "The Blue Spirit" and a minor supporting antagonist in the graphic novel trilogy "The Search".

They served as guards at first despite their advanced abilities. When Zhao was promoted to admiral, he sent the archers to capture the Avatar. Deflecting several other arrows with airbending and freeing himself, he finds himself staring at the Yuyan Archers, who have tracked him down.

Aang promptly tries to make a break for it, though finds him path thwarted several times. He manages to evade their arrows, though is forced to jump down the side of the mountain. Their mission was a success and Aang was in the custody of Zhao. Aang was fortunately freed by the Blue Spirit. They later fought the soldiers and escaped Zhao's fortress. Zhao ordered one of the archers to shoot the Blue Spirit. 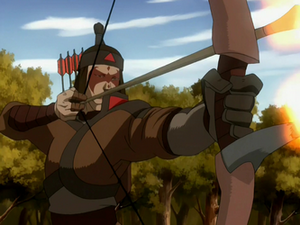 Vachir, the most known member of Yuyan Archers