Member of the Moro Corps

Help Moro rid the universe of law and order.

Yuzun is a supporting antagonist of the Galactic Patrol Prisoner Saga in Dragon Ball Super. He is a elite member of the Moro Corps and of Saganbo's Galactic Bandit Brigade.

Like Zarbon, Yuzun is a very handsome human-like alien with long hair and wears a tiara and earrings.

Yuzun is an arrogant and merciless individual, attacking Yardrat without caring about the lives of it's people, though he appears to have some honor - as he was shocked that Vegeta would unleash a mighty attack at him with no warning. He prefers not to fight, as shown when he demanded two prisoners weaker than him to fight in his place. Unlike fellow member of his race Zarbon, Yuzun has no issue with transforming into his Monster Form and instead appears proud of the form, claiming Vegeta is done for after he takes it.

Yuzun is released by Moro's second wish, and he and the other prisoners proceed to take over the facility and re-secure Saganbo's ship and use it to head to New Namek. He assists the other prisoners in invading other planets across the universe to steal their resources (especially treasures) and for Moro to drain to increase his power.

Yuzun is later sent by Moro to attack Planet Yardrat alongside two other former prisoners. Upon seeing Vegeta, he prepares to contact Moro, although his communication device is destroyed by Vegeta's Galick Gun, along with most of his clothes. Yuzun transforms and prepares to kill Vegeta, although the Saiyan makes easy work of him, dealing major damage with only a few blows. Yuzun then lifts a large building to throw at Vegeta, although he easily bats it aside. The former prisoner follows up by picking up another large building, this time infusing it with his energy to strengthen the throw. Vegeta kicks the building back at Yuzun, who throws it into the sky after a momentary struggle.

Having clearly defeated him, Vegeta offers Yuzun the chance to surrender to the Galactic Patrol, but Yuzun informs him that Yadrat isn't Moro's next target: Earth is. Seeing Vegeta's shocked reaction, Yuzun assumes this is Vegeta's home planet and then takes his leave and retreats into his spaceship along with his two teammates. He mockingly laughs at Vegeta, not realizing that the large building he threw before was falling down and coming down on top of him. Screaming in terror, Yuzun is killed by the explosion. 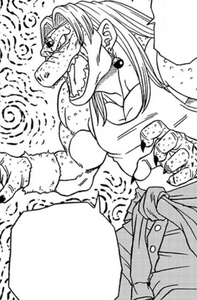 Yuzun's monstrous form.
Add a photo to this gallery

Retrieved from "https://villains.fandom.com/wiki/Yuzun?oldid=3629209"
Community content is available under CC-BY-SA unless otherwise noted.