Z-ARC is the main antagonist in Yu-Gi-Oh! Arc-V.

He is the original form of Yuya, Yuto, Yugo, and Yuri. and was the greatest duelist in the Original Dimension, who harnessed the power of the Dragon Cards and as a result, started the Dimensional War by destroying the Original Dimension. He was stopped by a duelist girl named Ray, who used the four Energy Cards to defeat him and as a result, the original dimenson split into four (Pendulum, Xyz, Synchro and Fusion).

In the original dimension Zarc quickly mastered all summoning techniques bonding with his 4 dragons and became duel monsters champion people would come from all over to watch him duel and all he wanted was to give everyone watching a good show. One day however an incident occurred where Zarc hit his opponent with his own monster and the crowd enjoyed it. Over time Zarc's crowd became more bloodthirsty and demanded more brutal duels and every time Zarc won he delivered and Zarc was considered to be unbeatable. Soon, Zarc was no longer being challenged as all who did lost, Zarc tired of waiting for a challenge found a new opponent: the entire world, he sent his dragons on rampages through cites until he wanted to make sure he was unstoppable he called on Astrograph sorcerer the ruler of time and space to combine him with the DNA from his dragons as well as making his dragons stronger Zarc took up the name Supreme King Z-ARC and ruled the world with fear. However Leo Akaba with help from his daughter Ray began working on a way to combat Z-ARC in which he created the 4 natural energy cards each designed to combat a specific dragon En Moon-the power of the cosmos En Wind-the power of storms and gale En birds-the power of every living creature's life force and En flowers-the very power of Mother Nature herself. Leo intended to use the cards himself however Ray, not wanting to lose her father, stole the cards and confronted Z-ARC successfully defeating him however Ray Z-ARC and their very dimension split into 4. Leo spent years preparing to stop Z-ARC from ever returning by combining the dimensions back and resurrecting his daughter. Throughout the series Z-ARC awakens within his 4 counterparts, “Pieces of Z-ARC” as Leo calls them, causing their eyes to glow and for them to lose control and attempt to reunite with the other 3 as Ray’s 4 counterparts each have a bracelet that will teleport one of Z-ARC’s reincarnations away if 2 of them get too close to one another and will start glowing and blinking rapidly if Z-ARC begins awakening, however Z-ARC eventually revives and slowly begins to defeat the lancers including Leo and his son Declan until Riley (housing the spirit of Ray) takes the 4 natural energy cards and defeats Z-ARC once again sealing away his darkness within her body causing her to regress in age. Yuya in order to fully vanquish Z-ARC Yuya sets out on duel after duel in order to make Riley smile after beating Shay Dennis and Jack, Yuya faces off with Declan in which the stakes are if Yuya wins he goes to the pro leagues but if he loses he can never duel again. Though the duel proves difficult to win Yuya ultimately triumphs resurrecting Zuzu and causing Riley to smile vanquishing Z-ARC's evil once and for all. 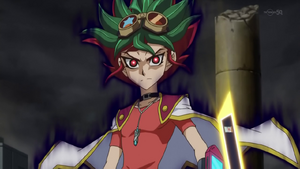 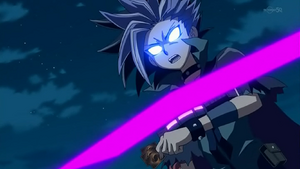 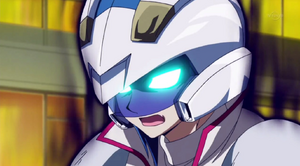 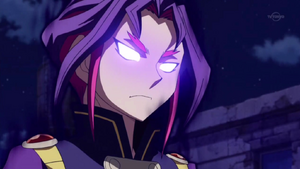 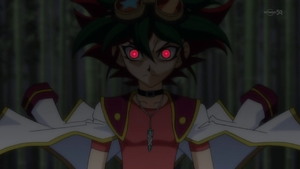 Z-ARC awakens within Yuya for the first time. 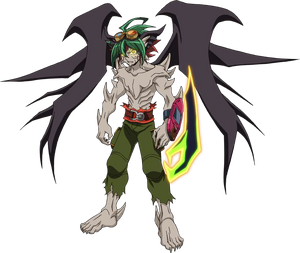