ZZ is a minor antagonist in JoJo's Bizarre Adventure: Stardust Crusaders, being one of the mercenaries hired by DIO and the last Stand-using assassin sent by Enya Geil. He uses the Stand Wheel of Fortune.

In Japanese, he is voiced by Hisao Egawa in JoJo's Bizarre Adventure: Heritage For The Future and by Iwasaki Masami in the anime. He is voiced by David Vincent in the English dub for the latter.

ZZ was hired by DIO to finish off Jotaro Kujo and his group, deciding to attack the when they were traveling by car on a road between New Delhi in India and the frontier of Pakistan. As they are traveling, a car goes back and forth, either slowing down or speeding up, to their annoyance. The car had all of glasses covered by dirt, and the only thing they could see of the driver was a musclebound arm out of the driver's window. As the car gives passage for them, they almost crash at a truck that was coming from the opposite direction, but Jotaro pushes their car away by using his stand. They stop by a bar on the road, where they find the car parked, but as they decide to punch everyone to find the driver the car sets off, so the group gives chase to him.

He them tricks them into going to a closed road, where he uses his car to push them into a cliff. Kakyoin uses his stand to hang the car, as Jotaro pushes it back to the road, making the other car fall in the cliff. Surprisingly, the car appears from the ground, transforming into a monster car. He shoots something at Jotaro, then chases them as they try to run, even climbing another cliff. They notice that what the car shot at them was gasoline. ZZ then shoots electricity at Jotaro, who is caught on fire. However, Jotaro escaped the attack by digging a hole in the ground with only his jacket burning. He then punches the car, making the driver fly out of the car. They then notice that the driver was a strange-looking man with muscular arms, a slim body, and a pot belly. Joestar Group then robs his car to continue their travel. ZZ is chained to a rock with a sign nearby that states that he is undergoing aesthetic training and would not like to be disturbed and is robbed of his passport.

With ZZ's failure, Enya Geil decides to take out the Stardust Crusaders by herself.

ZZ's Stand, Wheel of Fortune, takes the form of a monstrous Hudson Hornet that's appearance and abilities can be improved depending on Z's confidence. Strong and fast, it is is able to dig underground and to climb by using spikes on the wheels. ZZ is also able to shoot pressurized gasoline like bullets and use its wiring to generate an electrical current. 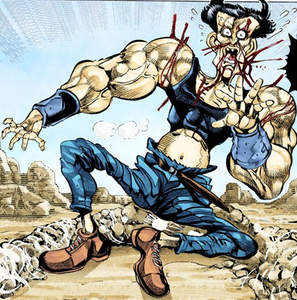 Wheel of Fortune emerging from the ground.