Ruler of the sa kiddies

Lord of the Demons

Oppress all the world by subjugating it (failed).

Zaal is the overarching antagonist of the 2011 computer-animated Danish film Ronal the Barbarian.

Zaal is said to have been born in the darkness. Enslaving humans and wanting to rule the whole world, he faced an opposition from the barbarian Kron. Seeing the threat, Zaal sent his demons against him. However, Kron defeated them all. Facing Zaal, he stabs him in the head causing him to explode.

In the present, the dark lord Volcazar wants to liberate him in order to continue his sinister project. He is helped by his sorcerer Gu'ra Zul, who is the one who communicates with the demon, and by his general. It is revealed that Zaal is imprisoned and at each 10,000 years during a full moon, he can communicate with people of the human world via a portal leading to an altar. It also takes the blood of all barbarians of the Sons of Kron's tribe. Volcazar eventually succeeds to free him and merges with him, taking Zaal's form.

Zaal is finally defeated and killed for good when the barbaric hero transpierces his forehead with the sword of Kron. 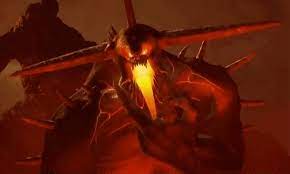