Zaardon, the self proclaimed Soul Reaper, is a minor antagonist in the second season of Gotham. He is the henchman of Theo Galavan and is used to break six criminals out of Arkham Asylum.

He was portrayed by David Fierro.

Zaardon meets with Galavan who wands him a vial containing a blue liquid, telling him to drink it all. After drinking it, Zaardon walks out on the streets and shoots wildly into the air while calling himself the Soul Reaper, which attracts Officer James Gordon's attention. After Gordon has ordered him to drop his guns, Zaardon draws a sword and attacks Gordon but is easily overwhelmed. He is brought to the precinct where he stays one night before being transferred to Arkham Asylum.

At Arkham Asylum, it is revealed what the vial Galavan handed him contained. When Zaardon is brought into a holding area containing Jerome Valeska, Richard Sionis, Robert Greenwood and Barbara Kean among other criminals, he makes a pompous entrance but none of the other prisoners care. This changes when Zaardon gasps for air and falls to the ground, dying. A steam of knock out gas then erupts from his mouth which takes out the psychopaths inside. Tabitha Galavan then appears with a few henchman and bust out the prisoners, leaving Zaardon's corpse. 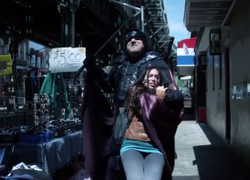 Zaardon at the police precinct 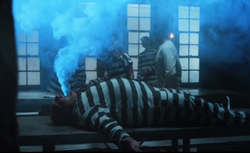