Zachy (by several)
Zachariah (by Bryce)

Prevent his tape being leaked

Zachary Shan-Yung Dempsey, often called Zach, is one of the main characters from the 2007 novel 13 Reasons Why by Jay Asher, as well as its Netflix adaptation. He is the former catcher of Liberty High's baseball team before he quit. He initially started as a major antagonist of the first season, but became an anti-hero as the show progressed in the second and third seasons.

He was portrayed by Ross Butler.

Zach is a part of Hannah Baker's Baker's Dozen and the subject of Hannah Baker's seventh tape from her list of reasons why she commits suicide. After Zach was rejected by Hannah he stole her encouragement notes from her bag, making her feel worthless and unwanted. Zach was remorseful for his actions but he refused to admit his wrongdoings and conspired with the rest of the Baker's Dozen to prevent the tapes from being exposed.

By the second season, Zach has become much nicer and less of a bully than he initially was. He still sides with Bryce Walker after everything but only does so, so he can bring Bryce to justice by sending Clay Jensen the polaroids of Bryce as well as most of the Liberty High athletes participating in hedonistic acts, including one of Bryce raping his own girlfriend.

In the third season, Zach is nominated to be Liberty High's football captain, and also starts a relationship with Bryce's ex-girlfriend Chloe Rice. During Liberty's homecoming game, Zach seeks retribution against Bryce after he breaks his knee and ruins his chances of a football career and scholarship. He mercilessly attacks Bryce at a pier and leaves him to die, unaware that a second party would kill him moments later. Unable to come to terms with what he has done, Zach attempts to confess to the murder to the police, only to learn that he wasn't responsible.

Zach is Justin’s good friend. Zach and Justin were walking together on Hannah’s lawn when she first saw Justin. Feeling sorry for Hannah after Marcus tried to use her, Zach tried to comfort her, but she ignored him. The next day, Zach said that he wished he had gotten matched with Hannah for the Dollar Valentine survey. Not believing him, Hannah yelled at him until he finally left. Zach's friends teased him for trying to talk to Hannah, but it is implied that his intentions were pure and he really liked Hannah.

After being humiliated by Hannah, Zach got revenge on her by stealing and throwing away all of Hannah’s notes in the Brown Paper Bag Program, notes that she desperately needed to gain comfort and confidence.

Hannah figured out that Zach was the one who took her notes, so she wrote him a note in order to confront him. In her tapes, she claimed that he read her note and threw it on the ground, however, it is revealed that Zach still keeps the note in his wallet.

Zach helped Alex by carrying his book bag and also helped him with his PT. He tried to distance himself from Bryce but still has to see him because they play baseball together. He was the 6th person to testify in Hannah's trial. He revealed that during the summer before she committed suicide they'd spent a lot of time together. He told the court that he and Hannah had a summer romance and had taken each other's virginities, but ended it after Zach was too scared to bring their relationship public which made Hannah believe he was ashamed or embarrassed of their relationship.

We learn that he is the one who had been giving Clay Jensen the Polaroids. Clay asked him why he didn't just come and talk to him about what was going on in the Clubhouse. Zach told him that it's because he's a coward.

After the lawsuit against the school was dismissed and Bryce Walker was granted probation rather than a jail sentence, Zach was in attendance of Hannah Baker’s funeral as well as her wake. He later attended the prom with Clay, Justin, Alex, Jessica, Tony, Ryan, Courtney, as they all join in a group slow dance to the song Hannah and Clay danced to together the previous year at junior prom as a way to quietly mourn for their friend.

In the third season, Zach's knee is busted by Bryce Walker during the Homecoming game, meaning that he can never play football again and ruining Zach's dreams. As a result, he brutally beats Bryce before his murder, but doesn't kill him. He is later brought in by Ani Achola as part of the group protecting Clay Jensen and Alex Standall the latter of whom had killed Bryce shortly after Zach's beating of him and explains to Alex what they did to protect him. At Tyler Down's photo exhibit, Zach apologizes for any pain and bullying he caused him over the years.

Despite his brutal beating of Bryce, Zach does show signs of remorse for leaving him for dead even saying "I'm sorry" during his funeral. Furthermore, fans feel that Zach beat Bryce not only because he broke his leg, but all the pain he caused. Either way, Zach still helped cover up Morty's frame-up to protect Alex from getting arrested.

In the fourth season, Zach becomes far more reckless yet also more open to experiencing college life, and still retains his friendship with Alex. He begins drinking and taking drugs, possibly out of a need to forget, as well as him still retaining guilt about beating Bryce and indirectly causing his death.

While Zach does begin a stable friendship with Clay, the latter begins to fall further into mental instability. Clay picks a fight with Zach, after being taunted into it by an unknown caller (later revealed to be Diego). Zach responds by hitting Clay twice and telling him to get his shit together. Zach ends his friendship with Clay after the latter dissociates and ends up crashing his car, breaking Zach's arm in the process.

At the pier, Zach is confronted by Diego Torres, Winston Williams and the other jocks. There he drunkenly insults Diego, and eventually admits that he killed Bryce (albeit was lying to protect Alex). Diego ends up beating him, with Zach only insulting him and yelling at him to hit harder, while also having flashbacks of what he did to Bryce. At the school prom, Zach attempts to rape an unconsious girl but is stopped by Alex. Despite all this, he still recovers, visits Justin at the hospital before he dies and is present at Justin's funeral.

Zach is shown to be a kind hearted person and a good friend to those around him though he is also extremely cruel and uncaring to a degree. Like the other jocks at Liberty High, he is somewhat shown to be a bully and disrespectful towards girls as he himself admits during his deposition that he said insulting things about Hannah. He is physically aggressive to as he threatened Tyler he would break his arm if he didn't leave him and the others on the tapes alone at lunch and is shown to have a temper as seen after Hannah rejected him and his help. Zach is also inconsiderate of how his actions affect others. When he began bullying/slut shaming Hannah he may have seen it as all fun and games, but he did not take into consideration how Hannah may have felt due to the betrayal she suffered from Justin Foley, Jessica Davis, or Alex Standall.

In spite of the other jocks, Zach appears to shown concern for the feelings of others as he tried to cheer Hannah up after Marcus humiliated her on their valentines date though he himself insulted her while trying to tell her she was the valentine he himself hoped for and as result led him to cruelly torturing Hannah by stealing the positive notes that she strongly desired to get which ultimately broke her spirit. Zach is shown to be selfish like a majority of the others on Hannah's list and is willing to keep the tapes a secret to protect himself and even claims that Hannah was too much to deal with and that she screwed up her own life and even though he was well aware that Hannah was calling out for help after stealing her notes for weeks, he did nothing to help her. He is shown to be in agreement with the plans to keep Clay from ratting them all out to and participated in intimidating him along with Alex and Justin. However he is also one of the few people who is civil to Clay as after the latter took revenge against him after hearing his tape, he only forgave him and admitted the truth. In spite of this Zach is not completely heartless and Alex even once says to him that he is simply an entitled idiot who does cruel stupid things while on the inside has a decent heart. He even kept the note that Hannah personally wrote to him (despite her belief that he threw it out) and during his deposition admits that Hannah was indeed bullied at school and that he took part in it as well, possibly showing he is willing to admit the truth. Zach is a coward, which he admits himself, in that he was not willing to go the lengths Clay would out of fear of what Bryce, as well as all of Liberty High, would do against him.

That being said, Zach does have a vengeful side, as shown by him brutually beating Bryce, even going as far as to throw his phone in the water a d leave him to die, simply for breaking his knee. He did show remorse for this however, such as apologzing to Bryce during his funeral and drinking heavily out of guilt for what he did to Bryce. He even goes as far to let Diego beat him up due to his guilt for beating Bryce. 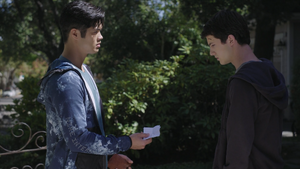 Zach trying to give Clay Hannah's latter in "Tape 4, Side A" 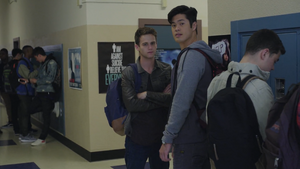 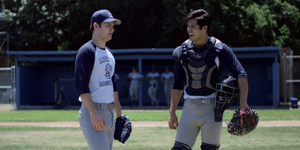 Bryce and Zach at the baseball field in "The First Polaroid" 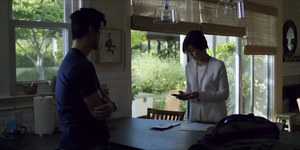 Zach and his Mom in "Two Girls Kissing" Zach and May at a baseball event in "The Little Girl" 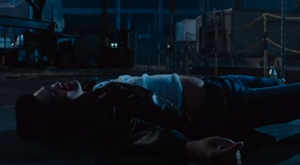 Zach beaten by Diego Torres in "College Interview".
Add a photo to this gallery

Retrieved from "https://villains.fandom.com/wiki/Zach_Dempsey?oldid=4270750"
Community content is available under CC-BY-SA unless otherwise noted.