Assist Bowen in increasing the US airport's security by staging a terrorist attack; escape the hijacked plane with 150 million dollars (failed).

Zack White is one of the two main antagonists (the other one being Tom Bowen) of the 2014 mystery-thriller film Non-Stop. He was Bowen's accomplice in the hijacking of the Aqualantic Airlines Flight 10 Boeing 767, and helped instigate and commit the murders on the flight.

He was portrayed by Nate Parker.

Federal air marshal William Marks initially clashed with White after cutting in front of him when White was taking too long. They later met again on board where it was revealed they would be sitting together. As Zack was taking his time, he noticed they would be sitting together and sarcastically asked Marks if he was in the way, before taking his seat. However, Jen Summers came up and asked if she could have the window seat, to which White obliged, taking the seat in front of Marks.

Later, after the incident began, Jen befriended White and asked him about himself. Upon realizing he was good with computers, Jen got Marks to come over, during which White apologized for his attitude earlier. Marks then revealed the situation to White and asks him to trace the killer's call, which worked, revealing the phone was in the pocket of one of the passengers. The passenger states he's never seen the phone before, and is later killed the same way the captain was after the third twenty-minute mark came around. Marks later finds a hole in the wall, deducting it to be the killer's former position as it is where he sniped the captain and passenger with a pair of fatal darts. The killer then sends a message to the TSA that Marks is a homicidal terrorist about to detonate the plane with a bomb. Seeing how there is no way to get rid of the newly discovered bomb, Marks throws the explosive in the back of the plane and smothers it with items to weaken the blast, convincing the passengers to work with him.

Marks re-watches the blackmail video of him insulting the passengers and notices as he is parading his then-suspect, Tom Bowen, around. Bowen appears to fall on the passenger who had the phone, making him realize that Bowen is the culprit. Bowen knows he's been caught and reveals himself as the highjacker, taking Marks's gun in a struggle. White also revealed himself as Bowen's accomplice, after shooting down an off duty cop that was helping Marks.

It was revealed that Bowen was a soldier appalled by the lack of security at U.S. airports before 9/11 which resulted in the death of Bowen's father, hoping that framing Marks as a terrorist will lead to drastically increased security - however, White is more so in it for the money. Bowen is prepared to die with the plane and shoots White when Marks convinced him to disarm the bomb. After Marks kills Bowen in a gunfight, White is shown to have survived the gunshot and fights Marks with a knife, but Marks manages to push him to the very back. Just as the bomb goes off, Zack attempts to make a run for it only to be caught in the blast and killed instantly.

White pretending to be an ordinary passenger onboard the plane.

White finally shows his true nature and reveals himself as an accomplice to Tom Bowen.

White's death when the bomb detonates on the plane. 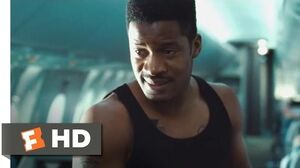 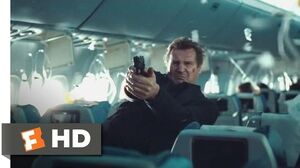 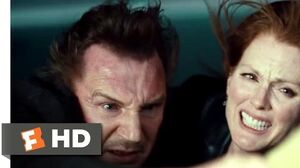