Enforcers
Zadam is a high-ranking member of SHADOW and a major antagonist in Kikaider 01. He is an android comprised of two bodies conjoined at the waist, with two heads, one red and one blue, that often speak in unison. Both his bodies wield tridents in combat.

He was voiced by Taimei Suzuki and Masao Hosoi.

Zadam was constructed at SHADOW's base on the moon. He was summoned from to provide backup to their Japan forces following Shadow Knight and Hakaider's recent failures. His travel to Earth was witnessed by an astronomer and his daughter, leading Zadam to try to have them assassinated in order to cover up his arrival on the planet, but the two were protected by Ichiro. Following Shadow Knight's death, Zadam took his place as second-in-command of SHADOW.

Zadam devised a plan to defeat Kikaider by building an android named Mari who had the power to transform into Bijinder and sending her to gain Ichiro's trust so she could lure him into a trap. To make Ichiro like Mari, Zadam programmed her to protect children from SHADOW's robots. Unbeknownst to Mari, Zadam had implanted a miniature H-bomb inside her body that was set to detonate if the third button on her blouse was ever undone. After Mari gained Ichiro's trust, Zadam used the pain circuit he had installed in Mari to torture her so Ichiro would remove her blouse to tend to her wounds. However, before Ichiro could undo the third button, Mari got up and walked away to keep Ichiro from triggering the bomb.

As punishment for defying SHADOW, Big Shadow had Hakaider and Zadam beat her before sending her out to redeem herself by destroying Kikaider 01. However, Mari continued to feel conflicted about her mission to destroy Ichiro and later a partially-incomplete conscience circuit installed inside her by Ichiro. Upon learning of this, Big Shadow had his forces capture Bijinder and ordered the conscience circuit removed so she would return to being loyal to SHADOW, but Bijinder was able to break free and fight off SHADOW's forces before escaping.

Zadam later took part in SHADOW's final, all out attack against the androids Kikaider, Kikaider 01 and Bijinder. During the final battle, Zadam split into two to take both 01 and Kikaider on at once. He was defeated by them, but was quickly revived by SHADOW's robot repairing machine. He was destroyed for good along with Hakaider by Kikaider, 01 and Bijinder's combined attack, triggering the bomb Komyoji placed inside the robot repairing machine and destroying the SHADOW HQ.

In the anime, he just another minor robot monster of SHADOW, as opposed to being one of their top members. He was sent out by Shadow Knight to capture Akira alongside many other robots. After Rei/Kikaider 00 arrived however the three Kikaiders were able to destroy him. 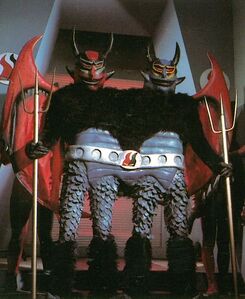 Retrieved from "https://villains.fandom.com/wiki/Zadam?oldid=4147761"
Community content is available under CC-BY-SA unless otherwise noted.