Stranger (by Meelo)
Master of the Skies (by Varrick)
Amon (hallucination)

The Legend of Korra

Leader of the Red Lotus

Practicing the art of airbending.

Practicing philosophy.
Loving and be with his girlfriend P'Li.
Meditating.
Wreaking anarchy and destruction.
Antagonizing and attempting to murder Korra and playing mind games with her.

Make the world free by assassinating its world leaders (succeeded with Earth Kingdom).
Make spirits live with humans.
Release Vaatu (both indirectly succeeded).
Capture Korra and raise her under Red Lotus philosophy (failed).
Free himself and his friends from the imprisonment (succeeded).
Convice Korra to help Red Lotus "liberate" the world or kill her and end Avatar Cycle (failed; formerly).
Help Korra enter the Spirit Realm so she could stop Kuvira (succeeded).

Zaheer is one of the four main antagonists of the animated television series The Legend of Korra (alongside Amon, Unalaq, and Kuvira), the sequel to Avatar: The Last Airbender. He serves as the main antagonist of Book 3: Change and a minor anti-hero/the overarching antagonist in Book 4: Balance. He is the third major threat faced by Avatar Korra.

He is a rebellious anarchist who believes strongly in the foundation of a new world order, without the White Lotus, the Avatar, or any governments or their leaders. After the Harmonic Convergence, he acquired the ability to airbend and used his newfound skills to escape imprisonment and attack Avatar Korra.

He was voiced by Henry Rollins.

Much like Korra's other nemeses, Zaheer was a complicated and selfless man who endeavored to bring the world into balance and was willing to work as hard and sacrifice as much as the Avatar herself to accomplish world peace.

However, as Toph Beifong indeed cited, his own imbalance prevented him from bringing balance to others, and his ideologies led him to do reckless and unwise things in his quest. His view of the natural order of things was delusional and it made him cruel, arrogant, vicious, and fanatical. He has a deep passion for philosophy, mostly around the theme of freedom, though often mixed up with delusional ideas that chaos is the natural order of things. He often twists and convolutes Guru Laghima's philosophy into anarchistic ideas for his Red Lotus organization.

He is very cold blooded when it comes to taking a life, being willing to kill without hesitation so long as it appears to be necessary. Indeed, even his affinity for Air Nomad culture and becoming an airbender did not prevent him from threatening the lives of the new airbenders in order to force Korra to surrender herself, and he displayed duplicity in going back on his word to release them in exchange for her surrender so that he'd still have them as leverage.

Despite his zealous and barbaric nature, Zaheer is not without honor, wisdom, or compassion. He cared deeply about his girlfriend, P'Li, and only by accepting what was following her death could he unlock the power of flight. Even if his actions threw the Earth Kingdom into chaos, he believed that the Earth Kingdom belonged to the people and not to tyrants, like Hou-Ting. When Korra came to him to overcome her fear of him, he agreed to help, feeling guilt over the fact that his actions had given Kuvira the opportunity to take power.

Recently, after the Harmonic Convergence, he found out he could airbend. Despite him just recently learning of his new ability, Zaheer is shown to be a fast learner as he can create large and powerful gusts of wind and knock people off balance. He's even capable of sucking the air out of a person, causing them to suffocate to death. He is also proficient at meditation and is able to discern Korra's location with ease. After the death of P'Li, Zaheer was free from all earthly tethers and gains the same abilities as Guru Laghima, the ability to fly without the need of his glider staff or even bending. He can fly like he was lighter than air. 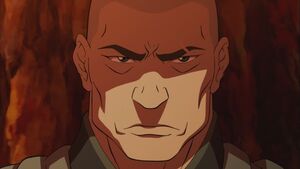 Zaheer in the Spirit World with Korra 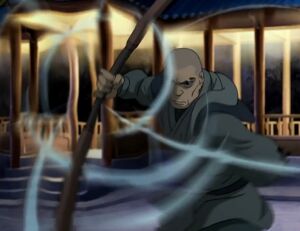 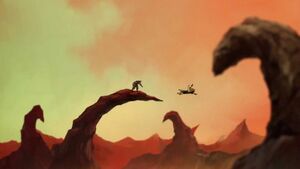 Zaheer ruthlessly tosses Aiwei into the Fog of Lost Souls after deeming him a "loose end". 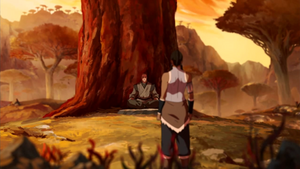 Zaheer speaks with Korra in the Spirit World, allowing the Avatar to ask any questions she desires. 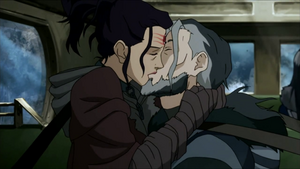 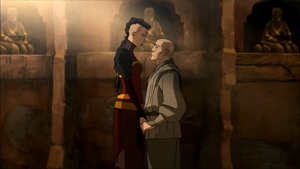 P'Li and Zaheer's final moment together. 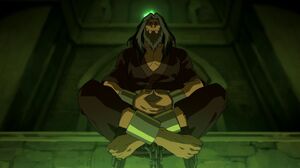 Zaheer is a fan favorite and frequently places first among the best Legend of Korra villains and even polls high among villains from the entire Avatar franchise. IGN referred to Zaheer as "one of the most intimidating and formidable villains yet on the show". In an interview with Polygon, Michael Dante DiMartino and Bryan Konietzko stated that Zaheer was one of their favorite villains that they had ever created, with Konietzko saying: "I think he knows what he is doing is awful and he doesn’t necessarily enjoy it, but whatever happened in his mysterious past was painful enough that he has accepted that as necessary."