Mercenary at the Dark Hunters (formerly)

Leader of the Piraka (formerly)
Godlike neutral being (currently)

Body capable of dispersing into millions of flying protodites (formerly)

Threatening and killing Toa and Matoran.

To obtain the Kanohi Ignika and gain the power of life and death (failed).

To take revenge on the toa Inika (failed).
To feed on dreams of those around him forever (failed).

Zaktan is an antagonist from the famous toy sets Bionicle and the primary antagonist of the 2006 storyline, The Voya Nui saga and a minor antagonist in 2007's Mahri Nui Saga. He later appeared in a web series of the so-called "Expanded Universe" small novels until he transcended into a reality-warping golden being, it is unknown if he was conscious in that form or his mind fused with the golden anomaly. Due to the novels being unfinished, Zaktan's fate alongside many other Bionicle characters is unknown.

Previous to the majority of events of the Bionicle saga, the entire of Zaktan's species were put on experimentation, in order to become superpowered mutants, however, their numerous mutations and their vicious nature made them too dangerous and overthrow their masters, but they were gonna carry their powers and alterations onto their bodies forever.

Zaktan was a mysterious Skakdi slave from Zakaz before the mythic mercenary guild the Dark Hunters found him and gather him with five other members of his own race, the Skakdi. It didn't take long until Zaktan led a rebellion with his teammates to get rid of the leader of the Dark Hunters, the Shadowed One. Eventually, the rebellion failed, and the Shadowed One tried to obliterate Zaktan in order to make example of consequences, but Zaktan's body began to shift until the point his entire being became a microscopic swarm named "protodites". However, Zaktan's conscious was still standing and was in complete control of his now fragmented body, the Shadowed One decided not to take more repercussions and leave him that way, considering that a fate worse than death.

Time before he decided to betray the Dark Hunters one more time, Zaktan was assigned to participate in a war between their ravenous guild and Teridax's dreaded brotherhood, when he was sent to guard a brotherhood's fortress,he accidentally discovered the Makuta's plan to overthrow Mata Nui and make their leader the supreme god/entity of the Matoran Universe, Zaktan decided to get away and keep the vital information, even from his fellow Skakdi, who were known for their treacherous nature.

Zaktan became the leader of the five Skakdi after they defected from the Dark Hunters and named themselves Piraka, a matoran obscenity for "thief and murderer". Years later, Zaktan brought the Piraka to loot the lair of the supposedly deceased Makuta Teridax, known to Zaktan, he was still alive in a gaseous, greenish smoke substance named Antidermis that surrounded the area and gave the Piraka the knowledge of the Ignika, the mask of life the and filled their minds with the objective of to steal it from it's island, Voya Nui, which could endanger the Universe and Mata Nui's life. Accidentally, one of the Piraka, Hakann, fired the power of a special spear named The Spear of Fusion onto Vezok, dividing his being into two parts: His formed but now erratic self, and Vezon, the logical mind of Vezok. This event was significant since Vezon decided to ditch the Piraka and go to Voya Nui on himself to steal the Ignika, but when he reached the mask it cursed him and one local giant beast, making them the new guardians of the mask of life.

Zaktan made all the preparations to arrive at the island, and Teridax followed them and once they arrived at Voya Nui. He rested his new form in a special crystalline vessel. His plan was to make believe the matoran villagers from the island that the Piraka were Toa at the time enough to find out were the mask is. Zaktan and Teridax both knew with all details the arrival of mighty Toa heroes to the island, one of them (Probably Teridax)planned to lure a giant warrior former member of Mata Nui's order, Brutaka, to Voya Nui. There, in exchange for his help, Zaktan fed him with Antidermis, a strengthener agent for Brutaka's race. When the time came, Zaktan ordered his Piraka to hunt down and enslave every matoran on the island using antidermis, the matoran worked for them as many died building lava canals and the Piraka Fortress. When the Toa from the original storyline arrived, Zaktan had to deal not only these heroes, but as well constant plots and rebellions against him, mostly created by Hakann, but his team easily defeated the first six Toa, and left them to die at the volcano eruption. Ultimately, thanks to the rebel matoran of the island, the toa escaped.

The Coming of the True Heroes

The rest of Zaktan didn't last, since another six Toa, named Inika, presented themselves upon Voya Nui, with the help of someone as strong as Brutaka, a warrior named Axxon. and the matoran was leading a rebellion against the Piraka and, behind his back as always, Hakann was plotting with his bodyguard, Brutaka. Promising him all the antidermis within the vessel for him if he helped him overthrow Zaktan. It didn't take long until Hakann backstabbed him and took his powers alongside Thok, during a fight with the Toa.

Eventually, Zaktan allied with the Inika to defeat the overpowered rogue Piraka. When they dealt with the menace, Zaktan decided not to kill the traitors yet since he needed them, for there was one last threat to steal the ignika, the Chambers of Fate.

The Chamber of Fate

Toa and Piraka found both the Chambers that eradicated those unworthy of recovering the mask, in particular, the Piraka found themselves in the Chambers of Fate, whose trial was to recreate the living fears from the intruders. In this case, the chamber recreated the myth of terror of the entire skakdi race: Irnakk. Irnakk made every Piraka fall to their own nightmares, all but Zaktan, who stand to him, realizing that if one of them doesn't believe in him, he would die. At the same time Zaktan recognized that after all the dread he has endured in his life he didn't feel fear anymore, instead, he called himself as fear itself. After hearing that, Irnakk (or the chamber) found that Zaktan was worthy to keep his way onto the mask of life. The Piraka shortly followed him.

The Chamber of Life

The Piraka found themselves trapped with their former partner,Vezon, who now wielded the mask of life stuck to the back of his head. Vezon promised to handle the mask to him if they kill Vezok. Zaktan was one of the first to attack Vezok, but he convinced the Piraka that Vezon wouldn't handle the mask even if he wanted to, who agreed. Zaktan then stopped the hunt for Vezok and sent the Piraka to attack the cursed being. Lastly, Vezon defeated them all with the spear of fusion. But before they killed them off, the Toa intervene. Defeating the half-skakdi and his giant spider beast in the end. But the Ignika was released of him and flew into the sea abyss below Voya Nui, Mahri Nui. Although Zaktan and the Piraka were defeated, they tried to get to the bottom of the sea in order to take the Ignika once and for all. One thing they weren't aware of is that the pit of the sea was contaminated with a mutagen, leaving only the heads and dorsal spines from the Skakdi, Zaktan lost a great part of his swarm but he still was able to control part of it.

The Return of the Piraka

The Barraki became the primary antagonists of the storyline and Zaktan didn't have much of an impact in the current saga, but he and the Piraka tried to ambush the Toa once more, using the matoran of Mahri Nui for hostages. Ultimately, alongside his partners, he was taken down once more and take into custody for the Order of Mata Nui in Daxia.

Zaktan appeared in the short stories and was used for Helryx and the Toa Hagah as a guide to finding Teridax. He guided them to Metru Nui but ultimately was Teridax who found them all. Zaktan was apparently killed in the ambush but a little part of his swarm survived.

Teridax took the other piraka from Daxia, and fused them alongside a variety of species, to a tank of Energized Protodermis, what was left of Zaktan swarm joined them in the pool, fusing with all the beings that were thrown at the tank and emerged as a golden being with godlike powers sustained to other's dreams. It is debatable if we still can consider Zaktan as a conscious being, due to the fact that the golden being fused their minds as well as their bodies, and seemed to have a neutral perspective of all things, in contrast to the power hungry, the ambitious mind of the Skakdi.

The writer of the Bionicle books, Greg Farshtey, never finished the books after Teridax's demise, and that left Zaktan/Golden Being's destiny unclear.

Zaktan was the most strange and alien of all the Piraka. Always fighting with a deep and bittered cruelty towards his enemies and with a cold as deathly attitude towards his fellows, if he really had any of the last. If Zaktan works on a group is with the lonely intention of using everyone at everything. Zaktan was well known for being merciless, capable of enslaving an entire population and get them work to death for his own goals. Ironically, due to his nature, he was the one that keeps the Piraka group together from constant fighting for a long time and has endured Hakann's plotting since he was presented to the Dark Hunters. While the other Pirakas were usually the murderous and arbitrary riffraff type, Zaktan stepped down as a deadly mastermind.

When he was fused and turned into the golden being, his personality changed drastically, becoming totally neutral and only caring for others to keep feeding him their dreams. 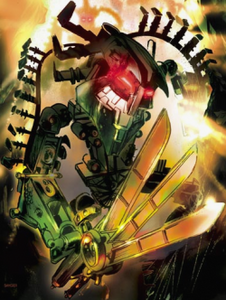 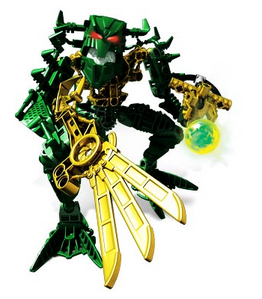 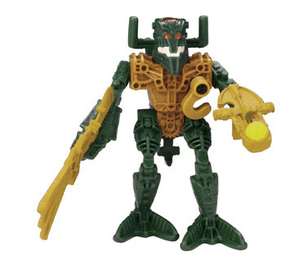 Zaktan as a McDonald's toy 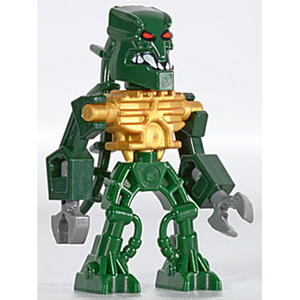 Zaktan as a Lego minifigure