Zaladane, also known as Zala Dane, is the Queen of the Sun People of the Savage land, half sister of the mutant Polaris and an enemy of the X-Men.

Zaladane was the High Priestess and sorceress of the Sun God Garokk for the Sun People and a mutant that lived in the Savage Lands. She claims that she's the sister to Lorna Dane, but her early history (especially how she came to the Savage Land and rose to power) remains unrevealed. She used her position to incite war among the Savage Land in a bid for power. Zaladane's sorcery transformed Kirk Marston into the avatar of Garokk of Earth, and she supported him as his second in command.

She has made repeated efforts to conquer the entire Savage Land and claims to be an emigre from the outside world. But after her bid for conquest was foiled, her mutates abducted Lorna Dane the X-Man known as Polaris. Posing as Lorna's long lost sister, Zaladane succeeded in transferring Polaris' magnetic abilities to herself, albeit temporarily. Thereafter, in a failed bid to control all of the magnetic forces on Earth, Zaladane ran afoul of Magneto, who overwhelmed her with his own superior magnetic might, and left her for dead.

Zaladane wields vast magical abilities, and like her "sister", Zaladane also has the ability of magnetism - many of her non-magical powers actually came from stolen High Evolutionary technology. 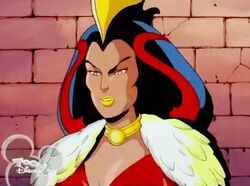 Zaladane in the X-Men animated series
Add a photo to this gallery
Retrieved from "https://villains.fandom.com/wiki/Zaladane?oldid=3544519"
Community content is available under CC-BY-SA unless otherwise noted.