Escape her pursuers (both failed).

Zam Wesell is the opening antagonist of Star Wars: Episode II - Attack of the Clones. She also makes an appearance in the video game Star Wars: Bounty Hunter as a deuteragonist. A bounty hunter and part-time assassin, she is a partner and close friend of Jango Fett, having worked with him since the events of Star Wars: Bounty Hunter. Recently, she has been hired to help Jango assassinate Senator Padmé Amidala on behalf of Count Dooku and the Separatists. However, her two unsuccessful attempts on Padmé's life results in her being captured by Obi-Wan Kenobi and Anakin Skywalker, ultimately forcing Jango to kill her before she can confess.

She was portrayed by Leeanna Walsman.

A Clawdite shape-shifter, Zam Wesell was born on the distant planet Zolan in the Mid-Rim. Having been created in a botched attempt to engineer genetic resistance to the harmful radiation emitted by Zolan's sun, the Clawdites were persecuted by their Zolander forebears, usually kept segregated to ghettos and prevented from intermingling with the general population. As such, Zam was raised in an atmosphere of constant oppression in a society that was either on the brink of civil war - or already embroiled in it.

At an early age, Zam joined the ancient warrior order of the Mabari while disguised as an ordinary Zolander and gained proficiency in their unique style of martial arts. Unfortunately, Zam grew increasingly attached to notions of individual achievement and profit, a notion that more traditionalist Mabari disapproved of. Furthermore, the Order also held that those who refused to reveal their true faces were sinners, and when Zam's true nature as a Clawdite became known, the Mabari cast her out as a heretic.

Fleeing Zoland in the shape of a human businesswoman, she eventually found refuge on the commercial ecumenopolis of Denon, where she found gainful employment in corporate security, achieving the rank of sergeant. She also went on to expand her skills and contacts, intending to pursue a career as a professional bounty hunter. After some time on the planet, she met another Clawdite and decided to start a family, eventually giving birth to a daughter - who she named Sone. However, family life didn't agree with Zam, and she soon left Denon in pursuit of greater profits: through careful use of her shape-shifting abilities, she was able to make a name for herself as highly effective bounty hunter, and made enough money to send large sums of it back to Zoland in support of Clawdite emancipation groups.

In one relatively early mission, she set her sights on Bendix Fust, a drug smuggler incarcerated on the asteroid prison of Oovo IV; having provided Republic Security with substantial evidence on the crime syndicate he worked for in exchange for a reduced sentence, Fust was wanted alive by his ex-employer Sebolto, who was willing to pay 50,000 credits in exchange for the opportunity to make an example of the smuggler. Priding herself on her mastery of stealth and disguise, Zam concealed herself aboard one of the cargo freighters that regularly visited the prison, and crept inside as soon as it landed. Sneaking through the complex, she arrived at Fust's cell, knocked her target unconscious with a gas grenade, and swiftly departed - but not before triggering a riot among the inmates to cover her escape.

As bad luck would have it, Jango Fett was hunting for Fust as well, having arrived via his own ship and infiltrated the prison at roughly the same time as Zam - arriving at the cellblock just in time to see the rival hunter escape with Fust in tow. After fighting his way through most of the prison, Jango caught up with Zam again while she was attempting to escape aboard his ship, Jaster's Legacy, and a tense standoff ensued; unfortunately for both parties, one of the prison's Firespray patrol ships obliterated Jaster's Legacy in an aerial attack, leaving the two bounty hunters stranded. Realizing that they had no choice but to work together if they ever wanted to escape Oovo IV alive, Zam and Jango agreed to a tentative partnership: while Zam kept Fust under guard, Jango sabotaged the prison's reactor and stole one of the Firespray ships for himself.

Once aboard the ship (eventually named Slave I), the two hunters expanded their partnership: once it became clear that Jango was actually hunting for Komari Vosa, the infamous leader of the Bando Gora cult, Zam was able to talk her way into helping out in exchange for a cut of the profits. When they finally delivered Fust to Sebolto as part of a gambit to learn of Vosa's connections to the Dug king, Zam went so far as to use herself as bait in order to get Sebolto in position - and was even able to save Jango's life over the course of a confrontation between him and his old enemy, Montross.

However, during a search for Vosa's ally on Tatooine, Zam was captured by Gardulla the Hutt and forced to betray Jango in exchange for her life; she even went on alert the guards to Jango's presence when the bounty hunter attempted to rescue her, an act that almost got him fed to Gardulla's pet Krayt Dragon. Disgusted, he abandoned her at Gardulla's palace.

In spite of this seemingly insurmountable loss of trust, Zam came to Jango's rescue once again: following him to the moon of Bogden where the Bando Gora made their home, she arrived just in time to save him from torture at the hands of Komari Vosa. Though her attempt at shooting Vosa only ended with Zam getting wounded by one of her own deflected blaster bolts, she was able to free Jango from his manacles with one final shot. Eventually, Jango was able to defeat the deranged former Jedi in single combat, earning the promised bounty of five million credits from Count Dooku - along with a highly-profitable cloning contract with the Sith. The following morning, Jango carried Zam back to Slave I for medical attention; though Zam continued to pester him about splitting the bounty 50/50, Jango teasingly chided her not to push her luck.

Over the course of the next ten years, the two hunters continued their tenuous friendship, sometimes working together for mutual profit, sometimes competing for valuable bounties. In one amusing case, Zam was hired by Vigo Antonin to assassinate Dreddon the Hutt - only to discover that Dreddon had hired Jango to kill Vigo, and with both hunters being successful, neither of them could be paid for their efforts. In another incident, the two teamed up to retrieve an ancient artifact - then later were forced to stop the religious fanatic who had hired them from destroying Coruscant with the same artifact. Zam became close to Jango and his son Boba.

In 22 BBY, Jango was hired by Count Dooku to kill Senator Padmé Amidala. In order to avoid anyone tracing the job back to him, he sub-contracted the job to Zam, offering her the highest paying job she had ever taken on. Unfortunately, though Zam was successful in planting a bomb on the senator's ship, Padmé was secretly traveling in one of the starfighter escorts: when the bomb finally detonated on the landing platform, only the crew and the senator's body double were killed.

Deciding that they had to try a more subtle approach, Jango provided Zam with a pair of highly-poisonous insects, warning her that there could be no more mistakes this time. However, though Zam's probe droid was successful in delivering the payload into the senator's quarters, Obi-Wan and Anakin were able to detect and kill the deadly insects before they reached Padmé; furthermore, Obi-Wan was able to grab onto the droid and ride it back to Zam - and while she was able to destroy the droid with a sniper rifle and sent him plunging towards the ground, Anakin was able to rescue him and continue pursuing Zam through Coruscant.

Unfortunately for Zam, evading Jedi proved more difficult than initially suspected: though she was able to elude Obi-Wan and Anakin for a time, the latter unexpectedly caught up with her by jumping out of his aircar and landing on her speeder - giving him ample time to disable it with his lightsaber, forcing Zam to crash in the entertainment district. Though she was able to lose them in the crowds at the Outlander Club, her attempt at shooting Obi-Wan in the back only ended with the Jedi slicing her hand off, before dragging her outside to question her.

Worse still, Jango had been watching the incident from afar: as soon as it looked as though his partner was going to confess to who had hired her, the bounty hunter shot her in the neck with a saber dart. Fatally poisoned, Zam had barely enough time to mutter a few surprised last words before succumbing to the toxin's effects, reverting to her true form as she died.

Zam having been given poisonous kouhuns by Fett so she can use them to kill Senator Amidala.

Zam loading the vial containing the kouhuns into an ASN courier droid.

Zam having retrieved her projectile rifle from her speeder.

Zam armed with her rifle.

Zam shooting at the droid, causing Kenobi to fall through Coruscant's atmosphere.

Zam getting into her speeder.

Zam fleeing in her speeder as Kenobi and his Padawan, Anakin Skywalker pursue her.

Zam firing at a power coupling in order to slow down her Jedi pursuers.

Zam flying her speeder through a tunnel.

Suddenly, Zam sees Skywalker has landed on top of her speeder.

Zam firing her blaster at Skywalker.

Zam trying to shake Skywalker off her speeder.

Zam seeing Skywalker is about to attack her with his lightsaber.

Zam fighting Skywalker with her blaster.

Zam wrestling with Skywalker when he grabs a hold of her blaster.

Zam losing control of her speeder during her struggle with Skywalker.

Zam having crashed her speeder in the streets of Coruscant.

Zam running through the streets of Coruscant as Skywalker chases after her.

Hiding in a nightclub, Zam sees Kenobi and Skywalker have arrived looking for her.

Zam aiming her blaster at Kenobi as he drinks at a bar.

However, Zam ends up having her hand cut off when Kenobi was able to sense her.

Zam disarmed and injured, leaving her to be apprehended by the Jedi. 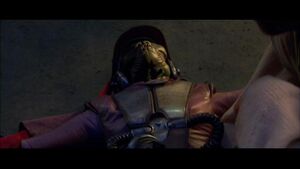