Take down the Lupinrangers

Zamigo Delma is the secondary antagonist of Kaitou Sentai Lupinranger VS Keisatsu Sentai Patranger. He is also the personal archenemy of Kairi Yano/Lupin Red and the entire group of Lupinrangers as a whole.

He is a trusted Gangler Monster minion of Dogranio Yabon, formerly regarded as a successor of the Interdimensional Crime Group Gangler's leadership until Zamigo renounced the chance to pursuit his own goals. He is responsible for the foundation of Lupinrangers and the apparent death of their loved ones.

He was portrayed by Jingi Irie.

Zamigo is a mysterious Ganglar Monster with ice abilities and often works alone. He is responsible for the formation of Lupinrangers, since he froze their loved ones during a rampage, making them to gather Lupin Collections in order to save them.

Zamigo acts mostly cold and distant towards his companions and often comments "so cold" on anything he finds tasteless. However, when facing Lupinrangers, he shows more of a flip side of his distant personality, revealing himself to be a pure sadist and showing no remorse in encasing Lupinrangers' loved once in ice, only referring his devastating rampage as something as easy as breathing.

It was revealed later in the series that Zamigo was resposible for multiple missing incidents and kidnappings, and he also skinned his victims off-screen to make human disguise for fellow Ganglar Monsters. Among them, there were Shiho Ichinose, the former Pat Green, whom he skinned and sold it to a Gangler Monster named Narizma Shibonz, who used it as a disguise to frame Noël Takao to be a Ganglar spy.

Zamigo later allowed Goche Ru Medou to implant a third safe on his lower back, giving him access to the power of the "Évade-toi de l'autre côté" that was previously in Goche's possession. During the final battle, using the Lupinrangers' loved ones as incentive, Zamigo challenges Lupin Red to a final duel within Dogranio's safe to endure no one would interfere before Lupin Blue and Yellow followed.

During his final struggle with Zamigo, Lupin Red armed himself with the Lupin Magnum after Zamigo's Lupin Collection is stolen. Then, Lupinrangers locked Zamigo's golden safes by the power of some Trigger Machines that Keiichiro lent to the Lupinrangers by Noël's request, unable to make Zamigo summon his ice pistol once more. Seizing the chance, Lupinrangers unleashed their ultimate attack on Zamigo, killing him. As he laid dying, Zamigo shattered into ice pieces and blue pedals, while commenting his final battle was fun and biding Lupinrangers farewell. Zamigo's death released his hostages back to the location where they were initially frozen. 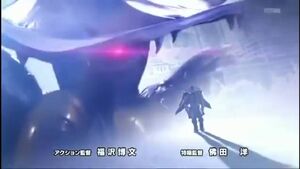 Zamigo in the opening scene. 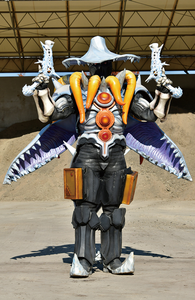 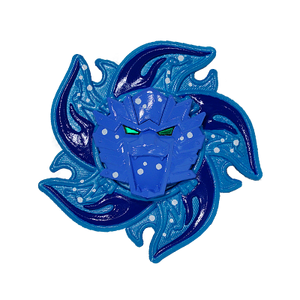