Member of the Seven Kin of Purgatory

Zancrow is a supporting antagonist from the manga/anime Fairy Tail. He was a member of one of the most powerful Dark Guilds, Grimoire Heart and was one of the Seven Kin of Purgatory. He was killed by Zeref during the Fairy Tail-Grimoire Heart War on Tenrou Island.

Zancrow had long, spiky blond hair that reached down to his shoulders. He was usually depicted with a psychotic grin on his face in that he bared his teeth. His red or pink pupils consisted of several concentric circles, which further enhanced his crazed appearance. He wore a yellow and dark blue skirt-like armor with a red waist ribbon that exposes the right side of his chest as well as his right shoulder, where his guild mark tattoo is located.

Zancrow has a psychotic nature to match his appearance, laughing with a high-pitched laugh and/or cackle at almost every occasion. He has a violent nature, as he gets excited over the idea of burning people to ashes. On Tenrou Island, when he overheard some of his lesser-rank subordinates cautioning him on Natsu Dragneel's strength, he roasted them with his flames as he considered Grimoire Heart the superior guild, which had no need for weaklings. This shows that his personality is similar to that of Gajeel Redfox's when he was first introduced as a member of Phantom Lord, since he believes his own guild is the strongest, and would not hesitate to attack those who disagree with him on that, be it ally or enemy.

Though he can appear to be kind towards his fellow Kin, such as when he comforted Meredy after Ultear's scolding, he seems to hold no genuine concern for anyone, gleefully expelling Meredy from the guild after discovering her and Ultear's betrayal, and even taunting her by revealing that Ultear, who Meredy loved as a mother, was the one who destroyed her hometown. The only member of his guild he seems to have any respect for is Hades himself, and becomes angered whenever he thinks anyone even jokes about defeating him. Despite his normally hotheaded mentality, he was greatly intimidated by Makarov's fearsome Titan Magic like the rest of his companions (excluding his master Hades).

Zancrow was raised by Hades alongside six other Mages to learn a particular form of Lost Magic, with Zancrow learning how to perform God Slayer Magic. One of these other Mages, Meredy, was found by Zancrow, Ultear, and Kain in a city they were destroying. Zancrow was against letting Meredy join, stating that they had to exterminate all the city's residents to obtain one of the keys to resurrecting Zeref. However, he relented when Ultear noticed the great amount of Magical potential in the girl.

He is first seen on an airship, which belongs to his guild. When he and his teammates are informed that Grimoire Heart and Fairy Tail would be fighting, Zancrow wreathes himself in black flames, laughingly questioning the strength of Fairy Tail's members, and claims that he would turn anyone who got in his way into ashes. Later, when they are preparing for battle, he asks Ultear why she's all pumped up (Ultear had changed into a uniform more suited for battle). He then comforts Meredy after Ultear scolds her, and then witnesses Makarov's giant release form. After that, Caprico transports him to the battlefield with his Magic, and Zancrow shouts in glee in anticipation for battle. As Natsu handily defeats a pack of lesser-ranked members, he shows up in Natsu's vicinity, telling the rest of the lesser-ranked members to leave. However, they caution him on Natsu's strength as a Fire Dragon Slayer and he grows annoyed and proceeds to eliminate them with his flames, saying that Grimoire Heart has no need for weaklings. He then launches a fist of black flame at Natsu, who tries to eat it but fails. As Natsu stares at him in shock, he reveals that he stands above Natsu in strength, as he is the God Slayer of flames.

During their battle, Zancrow informs Natsu that he learned his fire Magic from Hades. Despite Zancrow's claims that his magic comes from someone with the strength of a god, which Natsu scoffs at, his flames still prove to be stronger than Natsu's flames. Not only that, while Natsu can't eat Zancrow's flames, he can eat Natsu's flames with ease. Zancrow easily blasts Natsu far away from the battle with just a few destructive attacks. In his cocky rage, Zancrow even attacks Wendy, Happy, Carla, and Panther Lily for commenting on their fight.

A short time later, Zancrow once again finds Natsu beside the heavily-wounded Makarov, who is consoling him. Zancrow mocks both of them for showing fear, and mentions that Hades must have defeated Makarov. Natsu's ensuing rage at this revelation causes him to revitalize with a new fighting spirit that makes Zancrow nervous. Natsu then says that his "fear" is not of Zancrow, but it is of the possibility that someone other than himself will defeat Hades. He then announces that he will personally take out Hades himself.

Zancrow then walks right up to Natsu, face to face, saying he will make sure Natsu never again jokes about beating Hades. He gets pummeled and launched back by a few of Natsu's punches, but easily shrugs them off and retaliates strongly, lauding on the power of his black God flames. In this battle, Natsu proves to be a formidable opponent to him, even using a giant tree stump to smash him into the ground to compensate for his inferior flames. Nevertheless, Zancrow once again gains the upper hand in the fight by trapping Natsu in a sphere of black flame that will eventually kill him. However, before that happens, he is suddenly grabbed by a giant hand extended from an enraged Makarov. Distracted from Natsu, he engulfs himself in flame to burn Makarov heavily, but Makarov refuses to release him, but instead further tightening his grip.

With the three of them more or less immobilized, Zancrow nervously wonders aloud about who would be the first to fall, himself, Makarov, or Natsu. Suddenly, Natsu's Magical presence disappears, and Zancrow shouts in glee that the Dragon Slayer has gone first. However, it turns out that Natsu has nullified his own Magic, granting him the ability to eat Zancrow's black flames. Surprised, Zancrow is then released from Makarov's grip, only to be blasted into the air by Natsu's Dragon God's Brilliant Flame. Zancrow, surprised but conscious, is later seen lying on the ground grimacing, as Natsu tells Makarov that they have to warn Grimoire Heart that they should not mess with Fairy Tail. Natsu then collapses from his wounds, unconscious.

Zancrow appears again later, stopping Meredy, who is carrying Zeref across the island and is still being pursued by Juvia. He asks where she is taking Zeref, and accuses Meredy of betraying Grimoire Heart, along with Ultear. When Meredy begins to deny it, Zancrow attacks her, saying that she is no longer part of Grimoire Heart, and takes Zeref from her

When Meredy asks him to stop, saying that Zeref is part of her and Ultear's future, and the key to Meredy entering the "Ultimate Magic World" and restoring her hometown, Zancrow reveals that Ultear is the one who destroyed Meredy's hometown. As he laughs at her reaction, Zeref awakens and meets Zancrow's gaze, releasing a wave of Death Magic that kills him.

Hearing about Tartaros' breach of the non-aggression pact created by the Balam Alliance, Zancrow attacks their headquarters alongside Rustyrose and Azuma, expressing disdain for the minions as they force their way in. The trio finally meets one of the Nine Demon Gates, Kyôka, and introduce themselves. He then rebuts the female's statements about the fall of Grimoire Heart and the Alliance, pointing to their own presence as proof.

Later, he stands beside a seated Rustyrose and the three face the Demon in order to discuss their situation. When Azuma informs her of their conditions, Zancrow states that they will leave once those are fulfilled. But Kyôka soon tires of the debate and assaults Rustyrose with her Sensation Curse. Zancrow and Azuma immediately begin to disappear as they are revealed to be illusions created by their comrade's Arc of Embodiment.

Some time later, Zancrow is summoned again when Rustyrose meets Crime Sorcière and tries to convince Meredy to help him reform their former Guild. His attempt fails as the former Oración Seis members arrive to rescue Meredy and Jellal, the illusion getting dispelled in the process.

Neinhart's Historia of the Dead creates Zancrow right before Meredy during the battle for Hargeon, the man modeled upon the woman's very memories. Confirming his death, he immediately proceeds to maul the Crime Sorcière Mage, envying her chance at a free life. He works alongside Keyes to trap Meredy and Juvia, but the two females combine their powers to defeat the ghosts from their past, following which they are dispelled upon their creator's fall. 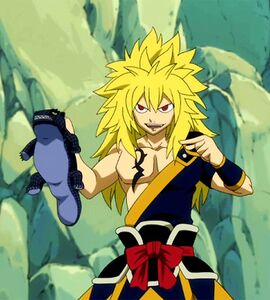 An example of Zancrow's arrogance: comparing a Dragon to a gecko. 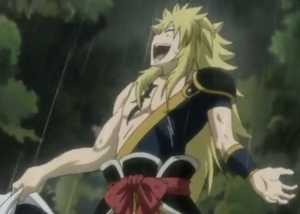 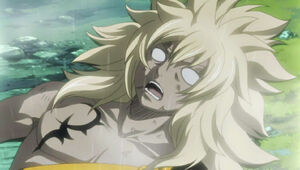