Escape the Never-Realm (as Zane, failed; succeeded after Vex was defeated).

Rule the Never-Realm (succeeded).
Destroy the Yetis.
Freeze the Formlings (all as the Ice Emperor, succeeded).

Zane is one of the three tritagonists of LEGO Ninjago: Masters of Spinjitzu, and served as the main protagonist and focus ninja of Season 3: Rebooted. However, he serves as one of the main characters-turned-central antagonist of Season 11: Secrets of the Forbidden Spinjitzu, due to General Vex erasing his memories and lying to him about him being the Ice Emperor in the Ice Chapter.

As a result of taking a blow for his master, Zane was banished to the Never-Realm by Aspheera.

Zane fell through a portal and awoke in the new realm and called out for help but received no reply. While wandering the realm, he attempted to move the mech but nothing occurred and he begrudgingly used the Scroll, allowing him to succeed.

As he moved the mech, a Giant Eagle attempted to attack him but he used the scroll to freeze its wing and scared it off. He created an ice cave for shelter, where he tried to repair the Titan Mech but realized he needed to perform a full diagnostic to do so. Zane recorded a message for anyone who happened to find the area in the future and told them of his identity, as well as his loved ones.

Zane proceeded to reboot the mech by plugging himself to the mainframe. As he did so, it turns out that Zane was stalked by General Vex who had been watching him since he arrived. Vex attempted to steal the Scroll of Forbidden Spinjitzu and use it to destroy Zane but was unable to, as he lacked power. However, Vex overheard the consequences of unplugging the mainframe and removed it from Zane, erasing his memory in the process.

When Zane awoke, he questioned who Vex was and the latter manipulated Zane into thinking he was his advisor and that Zane is the Ice Emperor who was overthrown. Vex handed Zane the Scroll of Forbidden Spinjitzu and persuaded him to take what is "rightfully his".

Believing Vex, Zane journeyed to the Castle of Grimfax and overpowered the soldiers before corrupting them into Blizzard Samurai. Vex told the scared Grimfax that Zane is the Ice Emperor and gave him the option of submitting or perishing. The former ruler surrendered allowing Zane to take his throne.

Zane took up a new set of armor and a helmet, as he took his place on the throne. Now christened the Ice Emperor, Zane sent an eternal winter across the land while Vex took his place as his advisor.

In the decades that followed, the Ice Emperor began his rule of terror by wiping out the Yetis, leaving only one survivor.

Due to the overuse of the staff, Zane became corrupted with his voice turning deeper and raspier, and his face becoming covered in ice.

At some point, he created the Ice Dragon Boreal, which became his loyal pet.

After the Formlings (Vex's people) refused to submit, Zane sent Boreal to freeze the village, leaving Akita and her brother (who was taken prisoner) as the only survivors.

The Ice Emperor is on his throne, as Vex appears to tell him of "strangers" (the ninja) are coming to them. Vex tells him they might be there for the prisoners or to defy his will. Hearing this, the Ice Emperor states they must be punished but Vex advises him to destroy them instead and he agrees. He asks for his Ice Samurai to be deployed to handle the strangers and those who aid them, at Vex's nudging.

Grimfax returned with less samurai than what he had taken with him.

But Zane pardoned him for his failure

Zane repeats his father's words of how he was made to protect those who could not protect themselves and flashbacks from the past come to him, he finally remembers who he is, he stops Vex from killing Lloyd 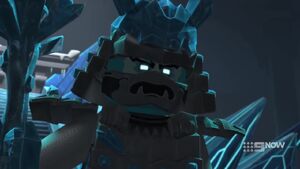 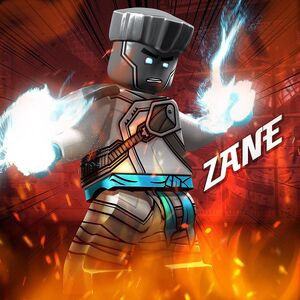 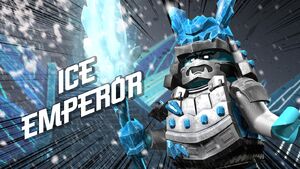 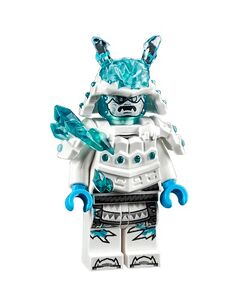