Make the world aware of Russia's power and influence.

Zangief, also known as The Red Cyclone, is normally seen as a hero from the popular Street Fighter series. However, in some other media related to the games, he is portrayed as a henchman of higher-ranking villains or (rarely) a villain in his own right.

In the live-action movie, Zangief appears as one of M. Bison's henchmen. He genuinely believes that Bison intends to turn the world into a utopia, but by the end of the film he defects to the heroes' side after discovering Bison's true intentions. Zangief is portrayed by Andrew Bryniarski, who also portrayed Leatherface in the 2003 remake of The Texas Chainsaw Massacre and its 2006 prequel, Texas Chainsaw Massacre: The Beginning.

Zangief is an outright villain in this feature length movie, where he is depicted as a near-feral monster who was more than happy to try and brutally murder a young boy after the boy angered him - he was so brutal that Ryu had to intervene to stop him potentially killing his opponent and although Zangief did show some minor signs of fear after Ryu almost killed him using dark energy he never redeemed himself, in fact he fell down a pile of debris and was not seen again in the movie.

Zangief was yet again portrayed as a villain, but as a lackey of M. Bison and Shadaloo. He was first seen sent by Bison to fetch Ryu, who was on the beach. Ryu and the Red Cyclone fought each other, but Zangief defeated Ryu with a spinning Piledriver. He then carried Ryu into his truck, and drove off back to Bison's.

In the climax episode, Guile is trying to get to Bison's quarters, but Zangief sees him and challenges him to a fight. After a long battle, Guile does a deadly blow to Zangief, killing him. He is not seen again after the fight.

Zangief makes a cameo in the Disney movie Wreck-It Ralph. He is seen with all of the other member of the Bad-Anon alongside with M. Bison, Clyde, Dr. Ivo "Eggman" Robotnik, Saitine, Bowser, and Kano. When Ralph states that he doesn't want to be a bad guy anymore, Zangief explains the importance of bad guys in video games, saying if there is no bad guy, then the game will be useless.

Zangief is seen again in the Game Central Station alongside with Chun-Li & again in the end of the movie where he attended Sergeant Calhoun & Fix-It Felix's wedding. Some fans of Street Fighter (especially those who knew a lot about him) suggest that Zangief is not a villain, while some states that his villainy is based from his movie and cartoon appearances, as mentioned above. In an interview with director Rich Moore (who voiced Sour Bill and, ironically, Zangief), states that he made Zangief into a villain in the film because he couldn't beat Zangief when he was playing Street Fighter II when he was a kid.

Robotic Zangief created by Bison in Marvel vs Street Fighter 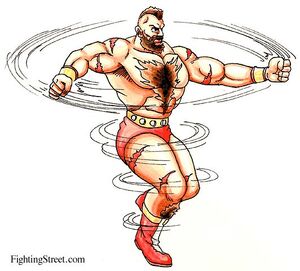 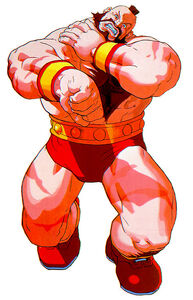 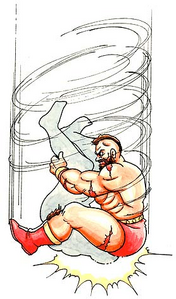 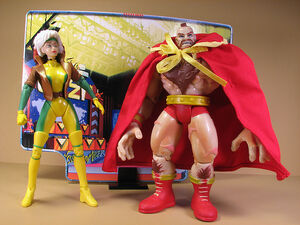 X-Men Vs Street Fighter figures of Zangief and Rogue 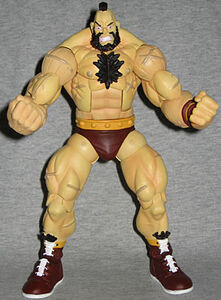 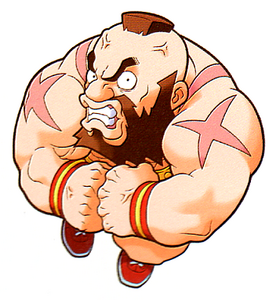 Retrieved from "https://villains.fandom.com/wiki/Zangief?oldid=3253000"
Community content is available under CC-BY-SA unless otherwise noted.