Decapitate the maximum possible people for pleasure and fun

Zank  (Zanku in the English dub) was a minor villain in the anime/manga series Akame Ga Kill!. He is also know as Zank the Beheader, Executioner, or Headhunter. He was a former officer of the empire, he was gone mad for decapitated people everyday, after that he became a notable serial killer who decapitated empire by people on nights.

He is voiced by Satoshi Tsuruoka in the Japanese version of the anime and Rob Mungle in the English version, the former of whom also voices Bluebeard.

Previously he was an executioner of one of the prisons of the Empire, but he went crazy for both behead people on his day, until it became a hobby. He had symptoms of schizophrenia, hearing voices dark he claimed to be the voices of the people he killed him and took him intensely crazy. He fled the empire and of his position of executioner after stealing the Teigu, Spectator. He was wanted by the Defense Forces Guard since. Zank began killing random people throughout the Empire, and especially in the capital to quench his thirst for blood, beheading his victims at night.

Later, Night Raid was hired to assassinate him, Akame and Tatsumi fought Zank after Tatsumi was ambushed when Tatsumi was cornered, Akame joined the fight and easily defeated Zank, and was finally able to find peace when he died, in his last words, he thanked Akame to rid him of suffering to listen to those voices every day.

Zank was the user Teigu Spectator, a helmet in one eye in the forehead that use very advanced mental abilities, including listening to the thoughts of others, and to accurately predict your next move and also allow use as x-ray vision format. He uses a pair of knife blades under his sleeves which appear Katars. 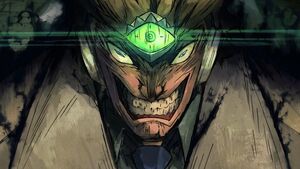 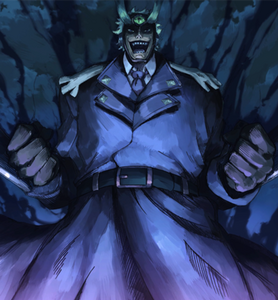 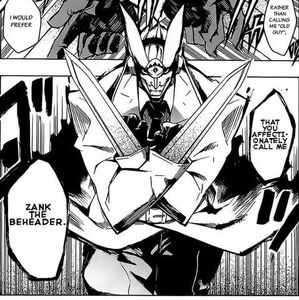 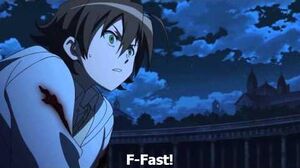 Retrieved from "https://villains.fandom.com/wiki/Zank?oldid=3538757"
Community content is available under CC-BY-SA unless otherwise noted.