Kill Santa Claws and the gang (all failed).
Save christmas (Zanta claws 3, Suceeded).

He was voiced by Joshua Tomar, who also provided the voices of Menthuthuyoupi from Hunter x Hunter.

Zanta looks almost like the real Santa Claws, but his skin is green and clothes are old and ripped. He doesn't have a nose and his lower jaw isn't visible (shown only briefly in Zanta Claws), so he speaks through his beard. His skin color gets darker in every episode, where it started at lime green and ended up at greenish-gray. Also, it is unknown if he actually isn't a skeleton, as his body is hidden under clothes.

Beyond his vast amount of strength and huge teeth, Zanta Claus can predict every child's gifts and know what a child is naughty or not. He also send his explosive carolers to kill them, and can make gifts that combust upon being open He has a sleigh just like Santa, but with various amounts of weapons attached to it, such as a minigun and a Boxmas Box.

In the first episode, Zanta acts similar to the real Santa Claws and gives presents to nice children. However, when he finds a naughty child, he eats their heads. Edd, Tom, Matt and Tord see him in action when they sneak up to the window. Unfortunately, Zanta notices and is going to attack them. The gang tries to defend themselves, but they aren't on his good list: Matt killed a bug, Tom ate Zanta's pie, Tord played paintball with real guns and Edd didn't thank the milkman for his Christmas card. The gang is eventually saved by jumping on a Coca-Cola truck. Unfortunately, Zanta jumps there, too, and corners the gang on the truck. Suddenly, the real Santa Claws appears and punches Zanta in his face, causing him to fall down.

Zanta also appears as the main villain in the second episode, where he kidnaps Santa Claws and steals his sledge. He also sends his explosive carolers to sing and then kill the gang, but their explosion only hurts Edd's foot and destroys his house. Angry Zanta then decides to give them "just what their hearts desire". The gang meanwhile travels to the North Pole where they find three presents in front of Zanta's lair front door. Tom gets a pair of blue eyes, only to for the sun to burn them. Matt gets money, that starts to burn, much to his anger because nobody told him money could burn. Edd gets a bottle-shaped pool of Coca-Cola, which boils him when he jumps to it. Angry gang then rushes into Zanta's lair. Zanta is disappointed to learn that Tord has left the gang and even tries to replace him. Later, Zanta swaps hats with Santa Claus in hopes that the gang wouldn't be able to recognize him. Tom gets a gun from somwehere and shoots the wrong Santa. Zanta then uses his laser gun to "finish the job". Tom quickly jumps in front of the laser, which bounces off his new eyes and hits a chandelier, that crushes Zanta.

Zanta eventually turns good in his last appearance. When angry Tom leaves his friends to go for a walk, he bumps into Zanta. He takes Tom for a ride on his sledge and tries to team up with him, but Tom doesn't listen and eventually drops Zanta from the sledge. After falling down, Zanta starts to eat a random man he meets on the street. Meanwhile, Tom uses Zanta's sledge to destroy Christmas. Edd and Matt think it is Zanta who is doing it, until he explains them it is actually Tom. Zanta then helps Edd, Matt and the real Santa Claws (another victim of Tom's rage) to stop Tom and provides a van to them that transforms into the Boxmas bot. While Tom is singing his song "Christmas Demolition", Zanta is fired onto his sledge to take part in a guitar duel with Tom. However, the rest of the gang shoots the sledge meanwhile, causing it blows up. Tom ends up on a wheelchair and Zanta reveals he hated Christmas because ever since he died, Santa had taken his place. Zanta then decides to stay dead, digs a grave in Edd's living room and lies dead there. 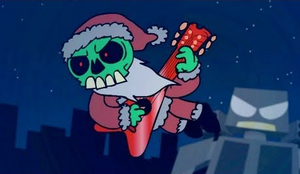 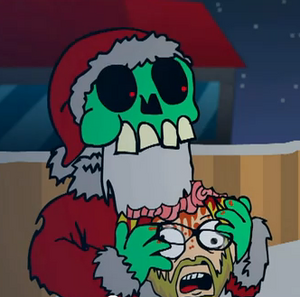 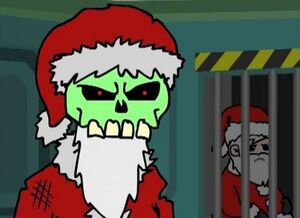 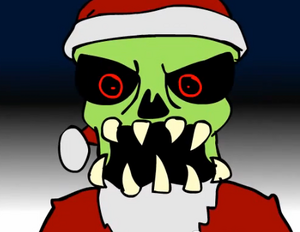