"A Terrible Person and Evil Ruler" (by Prince Yubi)

Capture Prince Yubi and take over the entire universe.

Zanu is the overarching antagonist of Joe Camp's 1983 short-lived TV series Benji, Zax & the Alien Prince. He is a manipulative and oppressive tyrant who has taken over the distant red planet called Antars and plans to capture Prince Yubi. He is the boss of Darah and Khyber as well as their Level 10 droid named Zord.

He was portrayed by Ken Miller.

Zanu has taken control of the red planet, Antars and overthrows Yubi's family, forcing Yubi and his level 2 droid, Zax to flee to Earth. He also has the king killed and imprisoned the queen. He announces that he has everything under control, except the fact that Yubi escaped from him and orders his hunters, Darah and Khyber, along with their level 10 droid Zord to capture him and take him back.

In order to survive on Earth, Antarians must wear a special bracelet known as a cipher. This is logical since the atmosphere is likely to be very different on Antars than on Earth. Most of the plot follows the two hunters pursuing Yubi and Zax in a black chevy van and their efforts in capturing Yubi almost end in failure, mostly due to Benji's great intelligence and loyal assistance and does an often better job protecting the prince than the level 2 droid assigned to him.

In the 1st episode "The Prince and the Bag Lady", Benji and Zax discover that the two hunters have arrived and are chased into a junkyard. Zax accidentally runs into a truck, knocking him unconscious and Benji is forced to lead the hunters away. Benji warns Yubi and takes him to Zax, only to discover that he has disappeared. Yubi is confronted by the two hunters and they discover Zax after a woman named Lucy takes him. They capture Zax and take him to their hideout to have him lead to Yubi. However, Benji follows them and manages to rescue Zax. When the hunters continue their search, Lucy distracts them, while the trio escape.

In the 2nd episode "U.F.O.", a news article about an Antarian spacecraft is published by Harwell Thompson. The trio are curious about him, while Darah and Khyber have already known his motives to become rich and humiliate them. Thompson kidnaps Yubi and captures Zax, while the hunters head after him with Benji following them. They arrive at the motel and Benji leads the hunters to Thompson, allowing him to rescue the pair and escape before the hunters could catch them.

In the 5th episode "Goodbye to Earth", Yubi tries to return to Antars to see his mother by getting a job at NASA, in spite of Zax's warnings not to endanger himself until he notices Benji being chased by the hunters and decides to get out of the ship and save him before he's ready to defeat Zanu.

In the 8th episode "Puppy Love", Tanya has been sent by Zanu to capture Yubi, but she redeems herself and decides to go back to Antars to tell Zanu that she couldn't find Yubi, while Benji leads the hunters away from Yubi and gets them arrested.

In the 9th episode "Double Trouble", the hunters mistaken a mischevious boy named TJ Parker for Yubi after committing minor theft and Yubi is arrested, due to their striking resemblance, but Benji and Zax rescue them and set things right. When the hunters realize their mistake, they impersonate Parker's parents in order to capture Yubi, but Benji stops them.

In the 13th and final episode "Decoy Droid", the hunters capture Zax and send a duplicate named Circon to impersonate Zax and lure Yubi into their trap. However, Benji notices the scheme and attacks Circon, due to his lack of arachnophobia and leads him into the same culvert Zax was trapped and shuts him off before the hunters return and turn him back on. Benji leads the evil droid to be shot by the hunters and rescues Zax before the hunters could recapture him. 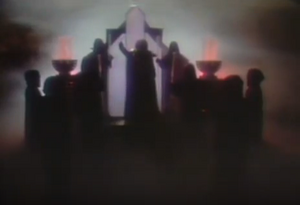 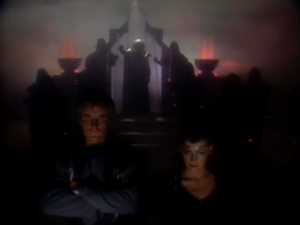 Zanu with his hunters, Darah and Khyber.
Add a photo to this gallery

Retrieved from "https://villains.fandom.com/wiki/Zanu?oldid=3507412"
Community content is available under CC-BY-SA unless otherwise noted.