Creator of the Monado

Zanza is the main antagonist of the video game Xenoblade Chronicles. He and his counterpart named Meyneth created the Bionis and the Mechonis, as the new universe in their own image after Klaus stumbled across a way to create a universe millennia prior to the game's beginning. He is little-known by the residents of the two titans except through stories alone. He is also known to have restarted the world multiple times.

He was voiced by Shintaro Asanuma in the Japanese version and Adam Howden in the English version, who also voiced Shulk. In his initial Giant form (Arglas) on Prison Island, he was voiced by Stephen Greif.

Klaus, along with Galea, was a scientist working in Rhadamanthus, a space station and phase transition experiment facility that held a very powerful artifact known as the Conduit. The two lived well lives until a vicious war started happening due to humanity's desire for the Conduit. Klaus tried sort out a way to stop the war finding out that there were multiple interconnected universes. He decided to use the Conduit create a new universe where humanity can escape, become more powerful, and any wars would cease. But in the process, Klaus opened up numerous portals around the planet causing many people to disappear, his body was also split in two. As a result, his evil half "Zanza" was born, who was sent to the new dimension, Zanza became the God known as Bionis.

The Downfall of the Two Titans

Bionis represented life, growth and the natural world. It wielded a huge and mighty sword of light known as the Monado. The Bionis gave rise to a near-human species called Homs, a form of humans set to live on the Bionis as humans did on Earth. Other species included little furry creatures called Nopons and Homs with wings on their heads known as High Entia.

The Mechonis, on the other hand, was controlled by Galea, who was reborn as "Meyneth". Mechonis represented intelligence, technology, and strength. Its weapon is unknown but it is known that it wielded an unnamed sword, similar to the Bionis. The Mechonis gave rise to a species of bio-mechanical organisms known as Machina.

Both titans were controlled by a mysterious substance known to the Homs as Ether. Both Zanza and Meyneth's powers depended on a surplus of Ether collected from the deceased denizens of each titan, and when Ether ran out, Zanza was forced to restart the universe once again.

It was a never-ending cycle of birth, life, death, and re-birth on a universal scale. Life was peaceful and uneventful, until Zanza decided to destroy the Machina race, the Mechonis, and Meyneth to obtain her Monado, the Instrument of Creation, so that there would be no need for the life of Bionis.

Zanza took control of giant named Arglas and released and unprovoked attack with the Bionis' sword while sending creatures known as Telethia on Mechonis, who was forced to fight back. The two titans were locked in a timeless sword-fight, until, one day, both giants delivered a fatal blow to the other, and Meyneth fell into a state of hibernation. Zanza's flesh, Arglas' body, however, was confined by the ancient High Entia to Prison Island. While his soul rested in his shrunken sword, which was placed in Ose Tower, awaiting for a new vessel to be born. Zanza also left behind three disciples, Dickson, Lorithia, and Alvis, promising them eternal life in his next world.

About 2,000 years later, seven Homs, including the main protagonist, Shulk, went to Ose Tower to search for the Monado. Zanza had a previous vision that Shulk would be his next host. First, he sucked the life out of him and the other Homs so he could live. Next, he took control of Shulk, becoming his life force. Finally, he allowed Dickson to take him back to his home. It would be years before Shulk could use the Monado but Zanza was patience.

Finally, the day came when Egil launched an attacks on Shulk own colony, it was lead by Mumkhar who killed Fiora, Shulk's best friend and love interest. This made Shulk so angry he vowed to kill him. Zanza gave him a vision where Shulk would reunite his soul with his flesh, Arglas' body, on Prison Island, where he would power up the Monado so it can cut through Homs. However, the plan went somewhat awry when Mumkhar killed Arglas under Egil's order.

It wasn't until Dickson shot Shulk in the back after he defeated Egil that Zanza was able to reborn with a new body. He battles and kills Meyneth, steals her Monado, and sinks Prison Island into the Bionis. That final act releases large amounts of ether and turns the pure-blooded High Entia into Telethia. Using the Bionis, Zanza completely destroys the Mechonis, killing Egil in the process.

While in Memory Space, Zanza has visions of the immediate past and future. However, one vision of him unleashing an attack on Shulk and his friends was cut off. He didn't understand why, he thought possessing both Monados means he should be "one with the passage of fate". Then he learns to his surprise that both Dickson and Lorithia have been defeated. Meyneth's wish of a world with no need for gods rang in his head, but he scoffs that idea saying it is nonexistent.

Thanks to Meyneth and Alvis, Shulk came back to life. When he met back with Zanza, he found the god in a cross form between the Bionis and the Mechonis' bodies. He thanks Shulk for his role in delivering Meyneth's Monados to him. Zanza offers Shulk the position of his new disciple, but Shulk turns him down. He talks to them for a short while longer before attacking the party. After fighting his first form, he then transforms into a much larger form. After defeating Zanza that time, Shulk gains his own Monado, to Zanza's bewilderment, and attacks once more.

After this battle, Alvis speaks to Zanza, informing him that even gods are restricted by providence. Zanza sees this as a betrayal and rebukes Alvis for disobeying him. But Alvis is unfazed, he reveals that he is the true manifestation of the Monado, much to Zanza's bewilderment. Alvis was actually one third of the administrative computer that Klaus used on the Conduit to create the universe, at that time his name was Ontos and he triggered a space transition event to enter the world. Alvis asks Shulk to make his decision: "Does this world belong to Zanza? Or does it belong to you?", and the Monado III gains a new symbol (神, kanji for god/deity), giving it the power to harm gods. Shulk rends Zanza in half, and the god is destroyed. Zanza's demise caused the death of his other half, the Architect. At that time Rex and his friends were defeating Malos, another part of the computer originally named Logos. 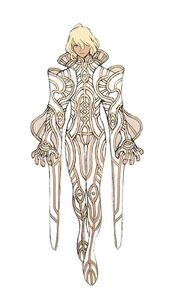 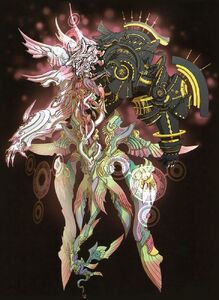 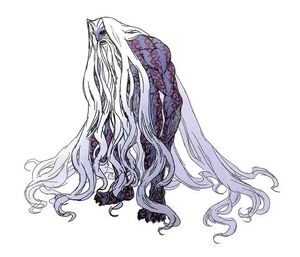 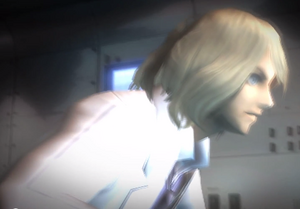 Klaus, before he became a god. 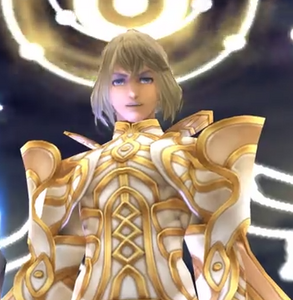 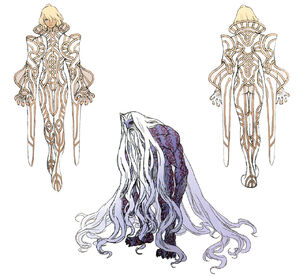 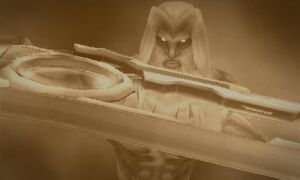 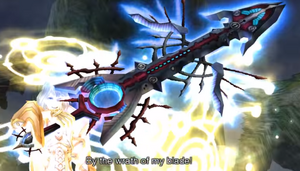 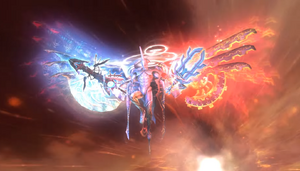 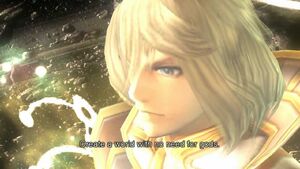 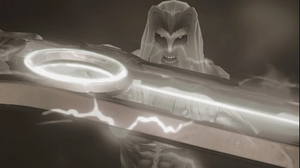 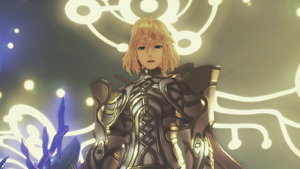 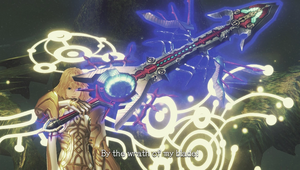 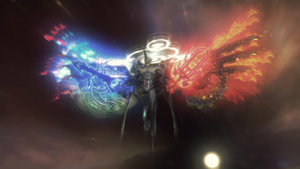 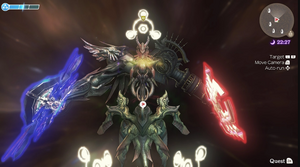 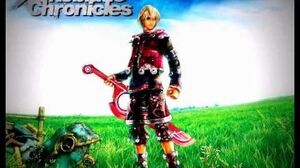 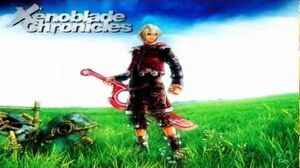 Retrieved from "https://villains.fandom.com/wiki/Zanza?oldid=4254964"
Community content is available under CC-BY-SA unless otherwise noted.