Guy Without Hair (by Alita)

Get revenge on Alita.

Zapan is the top hunter warrior of the Bounty-Hunters Club and a major antagonist in Alita: Battle Angel.

He was portrayed by Ed Skrein, who also played Ajax in Deadpool, Borra in Maleficent: Mistress of Evil and Thomas Alexander Upton in TAU.

As Alita gives a speech to persuade the Hunter Warriors to assist her in fighting Grewishka, Zapan mocks her speech, leading to Alita challenging him to a fight. Zapan accepts and attacks her, only for Alita to beat him and break his nose.

Seeking revenge on Alita for humiliating him, Zapan decides to target Alita's loved ones. He goes after Hugo and frames him for the murder of a cyborg after killing said cyborg himself. Zapan then pins Hugo up against a wall, but his friend tackles Zapan to give Hugo time to get away. After slicing Hugo's friend in half, Zapan chases after Hugo.

As Zapan is pursuing Hugo through the city, Alita comes to his aid after dispatching some bounty hunters hired by Vector to kill her. As Alita goes to save Hugo Zapan reveals to her that Hugo is guilty of attacking cyborgs and stealing their parts, which Hugo admits to. As Centurions close in on their position, Alita attempts to escape with Hugo but Zapan warns her that if she protects Hugo she will be considered a criminal too. However, Alita manages to aver this with help from Chiren by slicing off Hugo's head so he can be converted into a cyborg. Zapan recognizes what she is doing and attempts to take the head but the Centurions register Alita as having killed Hugo and allow Alita to attack him for attempting to steal her reward. Alita then steals the Damascus and cuts his face, causing Zapan to flee in disbelief as he complains about his face being damaged.

His fate is unknown after these events. 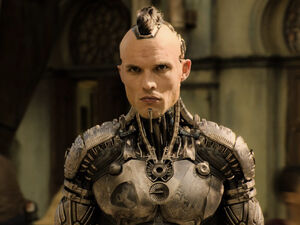 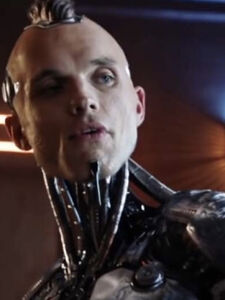 Zapan’s Evil Grin
Add a photo to this gallery

Retrieved from "https://villains.fandom.com/wiki/Zapan_(Alita:_Battle_Angel)?oldid=3910495"
Community content is available under CC-BY-SA unless otherwise noted.