Can transform into a Monster Form

Serve Frieza to the best of his ability.

Zarbon is a high ranking PTO commander and Frieza's right-hand man. He is an antagonist in Dragon Ball Z and Dragon Ball Z Kai series specifically being a major antagonist of the Namek Saga and the 1990 TV special Dragonball Z : Bardock The Father of Goku. In contrast to Dodoria, he is quite handsome, with blue skin, long green hair, and customized armor. He can transform into a stronger, yet extremely hideous form.

Zarbon despises transforming into his beast form because he values his own physical appearance above everything else. He despises ugliness and values beauty. He does however remain proud of the power his monstrous form provides him while still wanting to remain in his normal state as much as possible and only use his second form when absolutely necessary. When he does use his second form, he is very proud of its power and becomes overconfident. He tends to become much more brutal when using his monstrous form as he is normally more affable and even-tempered. He is very cunning, vain, resourceful, and intelligent, serving as Frieza's intellectual advisor. Like many of Frieza's soldiers, Zarbon tends to look down on Saiyans, though this is mostly only shown toward Vegeta, whom Zarbon inexplicably hates. Zarbon always enjoyed mocking Vegeta and referring to him as a "monkey". It should also be noted that Zarbon is very terrified of Frieza like many of Frieza's henchmen. Despite Zarbon being Frieza's most powerful henchman apart from super elite warriors such as the Ginyu Force and the brother duo of Abo and Kado, as well as being his personal advisor and one of his two attendants/commanding officers who are the highest in the chain of military command in his army, Zarbon is still shown to get little respect from Frieza, who has no problem threatening to kill him. Zarbon is very understandably afraid of Frieza since he is known to execute henchmen for reasons ranging from failing a mission to cowardice. Out of Frieza's elites, Zarbon is arguably the most humane, being very professional with his kills and not nearly as sadistic as Dodoria or Cui. He only seems to kill when it's his order to do so, and he isn't as openly mean as other soldiers, only directly antagonizing and looking down on Vegeta. This does not mean that he has any sympathy for any of his or Frieza's victims though, nor is he shown to actually feel explicit remorse for any of his horrific crimes he is complicit in and despite treating his soliders well in comparison, he still is willing to kill them if they fail him. He is shown to be very polite however, unless dealing with Vegeta. Zarbon is very soft spoken in his normal state, and this polite tone is to such extents that in the "Raging Blast" series, he still refers to Frieza as "lord" even when he's rebelling against him. Zarbon does seem to have some standards, as he asked Frieza if killing the entire Saiyan race was really warranted instead of just eliminating the more powerful ones. The Xenoverse games portray Zarbon as being very proud of his intelligence and looking down on Dodoria for both his ugliness and his simpleminded brute nature. They also show him as being quite capable of recognizing talent and being complementary toward those with skill such as the future warrior. On the other hand, if the player does poorly during their missions, he worries more about how their failure will "ruin his reputation" than the player's safety.

Zarbon was a member of Frieza's elite warriors. He and Dodoria witnessed Frieza destroying Planet Vegeta with delight.

Searching for the Dragon Balls

Zarbon and Dodoria accompanied Frieza to Planet Namek to find the seven Dragon Balls. Zarbon's scouter was broken from Vegeta's power level as he battled Cui. At the fifth Namekian village they attacked, Zarbon killed two of the three oldest Nameks there, as well as one of Frieza's henchmen; when one of the stronger Nameks knocked the soldier toward Zarbon, he kicked him into the lake.

After Dodoria was separated from them by Krillin and Son Gohan, and killed by Vegeta, Frieza returned to his spaceship. Zarbon set out in search of Namek villages and Dragon Balls, with a few henchmen like Appule also searching for villages.

Zarbon soon encountered Vegeta, and fought him. Zarbon was initially at a disadvantage, but transformed into his monstrous form and defeated Vegeta, knocking him into the water. Resuming his original form, Zarbon returned to Frieza, who was furious that Zarbon did not make sure Vegeta was dead. Upon finding out from another of his henchmen that Vegeta attacked a Namek village and hid a Dragon Ball, Frieza sent Zarbon to bring Vegeta to him and make him say where the Dragon Ball was.

Zarbon brought Vegeta back and put him in the rejuvenation tank. However, while Zarbon was out of the room, Vegeta finished his recovery, broke free and killed Appule before stealing Frieza's five Dragon Balls. Enraged, Frieza gave Zarbon one hour to find Vegeta and the Dragon Balls or he will kill him.

Zarbon soon found Vegeta, and Krillin with Guru's Dragon Ball, and followed them to Bulma's cave where he fought Vegeta again. Though he transformed again, Zarbon was at a disadvantage to Vegeta this time despite landing a few good hits. When Zarbon demanded to know why this was, the Saiyan prince revealed a Saiyan's ability to dramatically increase their power after they are badly hurt. After several minute long fight, Vegeta brutally slammed his fist clean through Zarbon's stomach. Zarbon begged Vegeta to spare his life saying he was only following orders, but Vegeta ruthlessly killed him with an energy wave through the chest, sending him flying into the Namekian sea to a watery grave.

In TeamFourStar's Dragon Ball Z Abridged series, Zarbon, like every other character, was played more comically than in the original anime. While not much about his role changed, Zarbon's personality was far different, being much more flamboyant to the point where, even though he stated he had a girlfriend (much to Frieza's surprise), his sexuality was up for debate. During his rant to Captain Ginyu about how his mission on Namek was a complete failure, Frieza states that he is convinced that Zarbon's girlfriend is named Chuck.

Like nearly every villain in the Dragon Ball Series, Zarbon can fly, generate multiple Ki attacks and possesses super human abilities such as speed and strength. He also has an alternate form, were he has an ugly, reptilian form. In this form, Zarbon's Power Level increases which also increases his speed and strength.

His base form has a power of twenty-three thousand, but when he transforms into Monster form it becomes thirty thousand.

Zarbon's signature (and possibly his most powerful) attack. To use it, Zarbon puts his hand forward with the other supporting it in a manner similar to the Explosive Demon Wave. Then, he charges an orange Energy Sphere and fires it in the form of a giant Energy Wave at the opponent, inflicting a high amount of damage.

The Possibility Cannon is a very versatile technique that can be fired from both one hand or two. It can be used as a regular Full Power Energy Wave or a giant Energy Sphere. It is purple and does high damage regardless of form.

Zarbon lifts one hand up and charges and orange Energy Sphere that transforms into a barrage of blasts when he swipes it down.

A Full Power Energy Wave Barrage made of Possibility Cannons.

A vicious and painful combination of punches and kicks that ends with a kick to the ground.

Super Zarbon grabs the opponent by their head and throws them up into the air. Then, he jumps up and slaps the opponent downwards before grabbing them in a bear hug, then a piledriver and releasing them as they are sent crashing down into the ground, inflicting a high amount of damage. 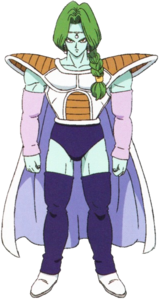 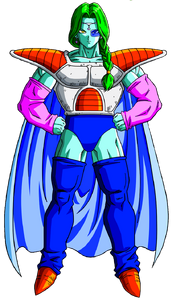 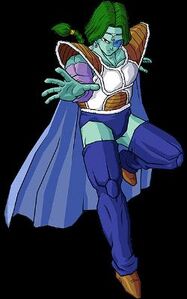 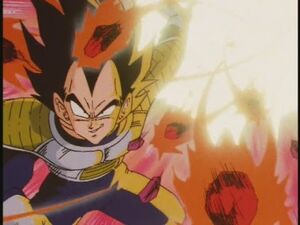 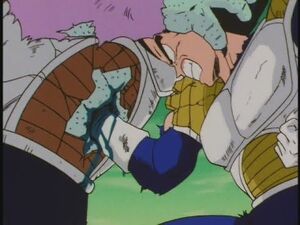