Captain (by the pirates)

Give herself a better purpose in life.

Find out all what pixie dust is capable of (succeeded).
Steal the vital blue pixie dust and use its endless magical properties on behalf of the Skull Rock pirates (formerly).
Make things right (currently).

Zarina is the titular central antagonist of Disney's 2014 film The Pirate Fairy, the fifth installment of the Disney Fairies film series.

She is a dustkeeper fairy that once became a pirate "captain" along with James Hook and his crew by stealing vital blue pixie dust. However, Hook and his crew later betray her, wanting to use the blue fairy dust to fly their ship away from Never Land to pillage towns.

She was voiced by Christina Hendricks, who also voiced Gabby Gabby in Disney/Pixar's Toy Story 4 and "Officer Jaffe" in Warner Bros.'s Scoob!.

Zarina was first seen experimenting on Pixie Dust and started off as a false protagonist. Fairy Gary told her that tampering it was forbidden due to it being dangerous. Although she was just curious, but after making pink pixie dust, Zarina accidentally caused the flowers to go out of control, thus having her fired and flew away.

One year later, Zarina turned into a bad pirate and released pollen from the poppies, which put most of the fairies to sleep. She also tried to steal the blue pixie dust, which multiplies regular pixie dust. As Tinkerbell and her friends pursued her, they realized that she was a pirate captain with a few other pirates, including James. Not wanting to give up being a pirate, Zarina threw blue pixie dust at them, causing them to switch their talents. The next day, she watched the group of pirates singing. It was shown that Zarina had made another pixie dust tree so that the pirate ship would fly. James was the only one who could understand her completely. When Tinkerbell begged again for Zarina to come back, she had the crew lock them away in a cage by the cook.

Eventually, she was betrayed by James and he made himself the captain by putting on a red hat and coat, taking the name "Captain Hook". Zarina was trapped in a tiny cage, which was thrown into the ocean. However, Tinkerbell and her friends were able to help her in the nick of time. Zarina decided to recover the blue pixie dust before James and the pirate crew would reach the second star to the right. After the final battle, when Zarina was about to go her separate ways, the fairies insisted that she would return, which she accepts.

In the end, Zarina made herself into a Pixie Dust Alchemist and mastered all the skills and colors.

Zarina has fair skin, thick, wavy auburn hair, and light hazel eyes. As a Dust Keeper and resident of Pixie Hollow, Zarina wore a yellow dress reaching just above her knees, tied with an olive-green belt, and wears light brown leggings underneath. On each of her wrists, she wears two or three wired bracelets. She wore brown shoes with worn-out soles. Her hair was always tied back in a messy bun. On her leaf apron, there is a large cursive "Z" for Zarina.

As the pirate fairy, Zarina's hair is left down and reaches just past her shoulders. She wears a single hoop earring with small magenta and blue beads threaded onto it. Her navy-blue coat with golden trimmings is worn when she travels to Pixie Hollow and in the promo picture. She wears a pirate-like wavy blouse with black bodice and golden buttons and a short, green skirt with pirate-style patterns on them. She also has long, gray boots that reach to her knees, a golden bracelet on her right wrist, and a bracelet belt that can carry her pin sword.

Zarina is a curious and feisty dust-keeper fairy who is intrigued by blue pixie dust. She wonders at its endless possibilities and many magical properties. Though Fairy Gary tells her that it is forbidden to tamper with pixie dust, she mixes the ingredients that the book "Pixie Dust Experiments" shows and she finds out it works. When she goes too far, she is no longer accepted as a dust-keeper and she leaves Pixie Hollow. A year later, she steals the blue pixie dust and joins forces with the pirates of Skull Rock, who make her their captain. When Tinker Bell, Silvermist, Iridessa, Rosetta, Fawn, and Vidia all follow to stop her and reclaim the mighty blue pixie dust to its rightful place, she uses multi-colored pixie dust to magically switch their innate magical talents. 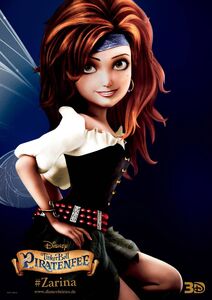 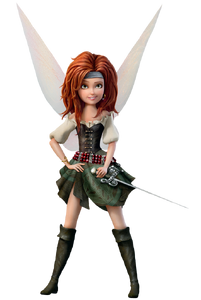 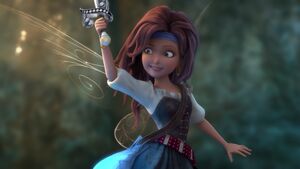 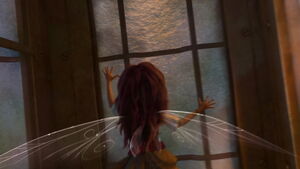 Zarina screaming after being thrown out by James Hook.