Zarkhator is the main antagonist of the 2009 Wii videogame Spore Hero. He emerged from the evil Red Meteor, and caused corruption across the planet.

Zarkhator was born from a blast that created the galaxy as was the player's character, Sporeling. Zarkhator travels through the Galaxy destroying planets by corrupting them with red meteors, and Sporeling tries to save them.

In the beginning, meteors of both colors (red and blue) spread throughout the galaxy. A blue and red one crash into a tropical planet. Zarkhator hatches from an egg in the red meteor, and quickly causes corruption and devastation, while trying to fight off Sporeling, who hatched from the blue meteor. Zarkhator attempts to crush your character with a red meteor but only manages to corrupt the Big Chief. He later ambushes Sporeling in Moonlit Stoneway and fights, but loses.

In Mushroom Grove, he transforms into a Krikat and offers Sporeling a poisonous Suwapootoo fruit. He conspires with corrupted creatures to bring red meteors back to certain places. Finally, Zarkhator tries to get to the planet's brain at Creature Beach. He races against Sporeling to reach it, but loses. Zarkhator then manages to get to the heart of the planet. He battles against Sporeling three times, but loses due to Sporeling having the Spor-o-Mega. Sporeling then uses its ability to evolve to devolve Zarkhator into a harmless form. He is laughed at in his new form, and runs away.

Sporeling and Zarkhator are brother's, born from the galaxy, and when they die their bodies convert back into psychic energy and return into space for the cycle can begin again, and fall to a new planet.

When Zarkhator first emerges from the Meteor, he resembles a smaller version of his second form. He is born more powerful than Sporeling and is capable of pushing large red fragments with some difficulty. This form was seen in the opening video.

Zarkhator's second form was small and miniature, but still powerful. He attempts to crush Sporeling with a red meteor, but he misses. Unfortunately, the meteor corrupts Big Chief, the leader of Meejee's tribe.

Zarkhator's third form has the body form of a humanoid. He has the Wareye eyes and the Slagjawed mouth. In this form he gains the ability to spawn red balls of light at will. This form was seen in the Moonlit Stoneway. Also he has the ability to jump higher than any other creature.

Zarkhator's fourth form looks like the previous form, but has the Barracutie mouth and two extra arms, which may be retractable. This form was seen in the Moonlit Caverns.

Zarkhator's fifth form resembles the third form but has the Soundersnout mouth. In this form he gains the ability to shape shift into near-identical replicas of creatures, but he will still have the Wareye eyes and other "evil" looking details (ie: Monstrumtalons for hands). This form was seen in the Mushroom Grove.

Zarkhators last form was the same as the last one, but more muscular, with the Machinoptera wings, Deathspikes, and the Beefteef mouth. This form was seen in the Creature Beach.

After defeating him, Sporeling evolves Zarkhator into a form that cannot harm the planet. This form's appearance is determined by the player, and can be seen just before the ending credits. It is actually quite possible to leave him as it is and he will still not be a threat. 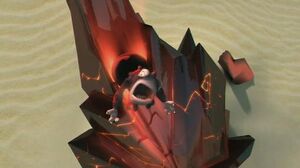 Baby Zarkhator emerging out of the crystals. 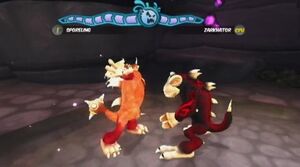 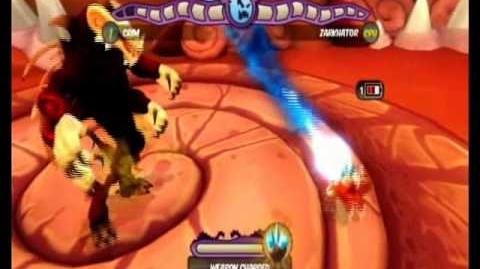 Spore Hero Final Boss Zarkhator
Add a photo to this gallery
Retrieved from "https://villains.fandom.com/wiki/Zarkhator?oldid=2650290"
Community content is available under CC-BY-SA unless otherwise noted.