Template:Infobox Once Yang's favorite toy, Zarnot is an evil action figure brought to life by the Lie Fairy. Due to his commonplace acts of failure, Zarnot was forced into a hated toy box by the Night Master. With the Night Master defeated, Zarnot's status was unknown until "Deja Foo." In "Wonder Tweens Go!", he is upgraded by "The Lesson" into a more powerful form and briefly renames himself "Generitron" and does a bunch of generic bad guy cliches, such as building a doomsday device, laughing uproariously, and shouting his name. It's not yet known if the transformation is permanent; however, considering the changes the other villains have gone through, it is likely. It has been revealed in "Dummy Up" that Zarnot still desires Yang's affection and attention, and seems to grow insane jealousies towards any other toy that Yang might be playing with (such as Yochop). Whenver Yang ignores him, he seems to want Yang's attention more, and is willing to go far lengths to attain it. 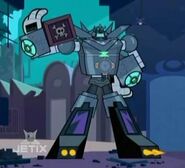 Retrieved from "https://villains.fandom.com/wiki/Zarnot?oldid=1609506"
Community content is available under CC-BY-SA unless otherwise noted.